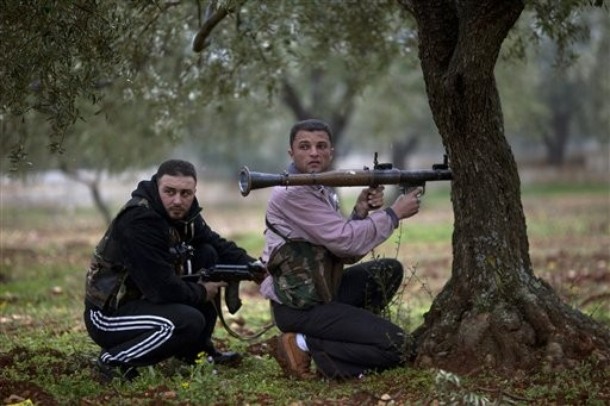 From the Editors of the Los Angeles Times:  War is not something to blunder into blithely, and no country — no matter how powerful — can solve all the problems of all the countries in the world. So when is it right to go to war? We’ve said before that we like the formulation of Richard N. Haass, president of the Council on Foreign Relations, who distinguishes between "wars of necessity" — those prompted by an invasion or other direct threat to vital national interests — and "wars of choice," which are not inherently good or bad but ought to be rare and ought to be undertaken only if they can be reasonably assumed to accomplish more than they cost.

In the case of a war of choice waged primarily for humanitarian reasons, there are a number of rules that should guide American engagement, in our view. The provocation must be deemed severe enough to justify putting American lives at risk: Genocide, for example, shouldn’t be allowed to continue just because its perpetrator invokes national sovereignty. Before an intervention begins, policymakers should determine that all the alternatives short of war have been exhausted. If the plan is to aid a rebel group, as in Libya or, potentially, Syria, planners should be sure of who those new allies are and what they stand for. Countries should seek the widest possible support before committing troops or resources; Obama was right to insist on the backing of the U.N. Security Council and the Arab League before taking action in Libya. Where possible, intervention should be undertaken by multilateral organizations rather than individual nations. Once war is underway, planners should set narrowly tailored, definable and achievable aims.

As the U.S. has been reminded in recent years, there should also be a credible exit plan and a strategy for a war’s aftermath. Nation-building requires a commitment of time and great resources. Though policymakers sometimes forget it, wars pile on debt for future generations to pay.

These conditions have not been met in Syria. This is not a war of necessity for the United States; our vital national interests are not in danger. To justify American involvement — limited or otherwise — policymakers have yet to answer a number of questions. Have all diplomatic alternatives been exhausted? Can Russia and China be won over? What is the objective, the strategy, the end game?

In recent years, the United Nations has enunciated a doctrine known as "responsibility to protect," which postulates that the world community shares a responsibility to defend populations from atrocities such as genocide, ethnic cleansing and crimes against humanity. We agree, but what’s happening in Syria doesn’t rise to the level of genocide. Secretary of State Hillary Rodham Clinton said this week that Assad fits the definition of a war criminal, and others have argued that he is committing crimes against humanity. Our view is that the international community has a moral responsibility to work urgently to end the violence in Syria, but we do not believe it has reached the point at which military intervention is justified.  (photo: AP)