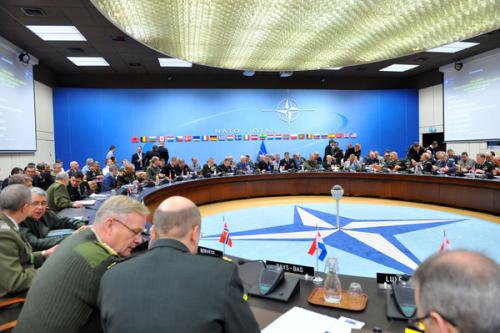 From EUCOM:  On Nov. 25, 2009 I proposed in these spaces an idea of linking the leadership of U.S. European Command with the senior U.S. leaders based in Brussels, the “Capital of Europe.” Then I suggested a meeting involving America’s geographic military command in Europe – EUCOM, with the 3 U.S. Ambassadors representing America to Belgium, NATO and the European Union. I’m happy to report that that idea materialized into a productive, informative visit March 19, 2010.

The EUCOM staff, led by LTG John Gardner, the military Deputy Commander, and involving all Joint Directorate Chiefs, as well as interagency representatives posted to EUCOM from the Department of State, Department of Treasury, and Immigration and Customs Enforcement (ICE), were hosted at NATO Headquarters by the three U.S. Ambassadors based in Brussels; AMB Howard Gutman, the bilateral ambassador to Belgium, AMB Ivo H. Daalder, the Ambassador to NATO, and AMB William Kennard, recently appointed U.S. Ambassador to the European Union. Also present and co-hosting was Vice Adm. Richard Gallagher, the Chairman of the Joint Chiefs of Staff (CJCS) representative at the U.S. Military Delegation to NATO.

AMB Gutman noted, “Such a gathering of EUCOM, NATO, EU and a bilateral Ambassador is invaluable.” Vice Adm. Gallagher mentioned that “there is probably a NATO connection to all that EUCOM does” and AMB Daalder reminded us all of the value of the get-together; “Admiral Stavridis should not be the only one at EUCOM that understands the importance of a NATO-EUCOM relationship.”  (photo: NATO)