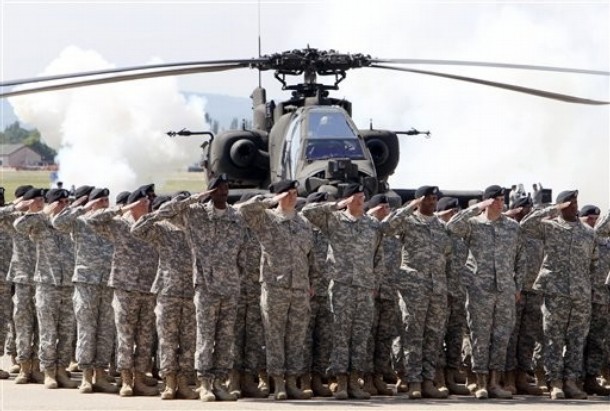 From Jim Garamone, Armed Forces Press Service:  In an interview on his way to Fort Bliss, Texas, [Defense Secretary Leon] Panetta said that the Army will withdraw two brigade combat teams from Europe, while retaining a strong presence in the region via rotational units.

The change is part of a new, 10-year defense strategy announced by President Barack Obama last week that emphasizes air-sea doctrine to better allow the United States to confront more than one threat at a time, Panetta said. Still, ground forces will remain important, and soldiers and Marines will continue to deploy to Afghanistan and be on the Korean Peninsula and partnering with nations around the globe. . . .

As the Army replaces the two brigade combat teams with rotational units, the Europeans actually will see more U.S. forces because the American forces in Europe have more often than not been deployed to Iraq or Afghanistan, Panetta said.

DOD officials have spoken to European leaders about the withdrawal and they understand why the change will be good for the U.S. military and NATO allies  senior defense officials traveling with the secretary said.   (photo: AP)