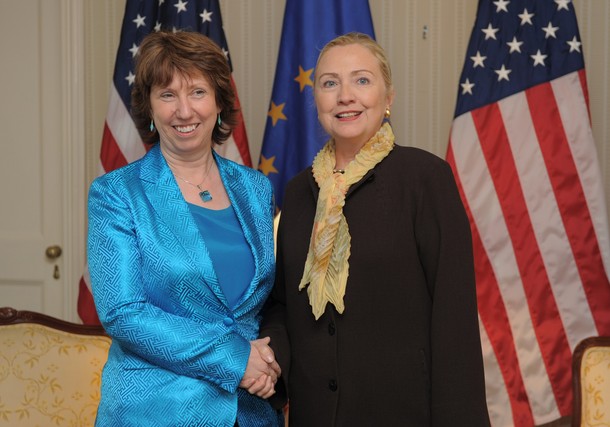 From the Department of State:  Secretary Clinton and High Representative Ashton noted that interdependence between Asia, the United States and the European Union has reached unprecedented levels. Closer consultation between the United States and European Union on Asia-Pacific issues bilaterally, and with partners across the region, will be aimed at advancing regional security, development, well-being, and prosperity. . . .

Both sides intend to seek closer cooperation with Asian partners in fighting transnational crime, terrorism and addressing cyber-security issues, while ensuring freedom of expression and the free flow of information in accordance with international law. They are cooperating with partners to build regional disaster preparedness and crisis response capacity.

The United States and European Union commit to strengthening cooperation in counter-piracy based on international law including dealing with its root causes. Both sides plan to work with Asian partners on increasing maritime security based on international law as reflected in the United Nations Convention on the Law of the Sea, and lend assistance to the development of confidence building measures to reduce the risk of crises and conflict. On the South China Sea, both sides continue to encourage ASEAN and China to advance a Code of Conduct and to resolve territorial and maritime disputes through peaceful, diplomatic and cooperative solutions.

The United States and European Union are continuing to work to prevent the proliferation of weapons of mass destruction and urge North Korea to live up to its international obligations and commitments.

Both sides also exchanged views on the recent historic transformations taking place in Burma/Myanmar and noted the importance of increased coordination on development assistance and responsible and transparent private sector investments.

Secretary Clinton and High Representative Ashton decided to further cooperate with Asia-Pacific partners in promoting democracy and human rights, in particular those of vulnerable groups such as women and children as well as ethnic and religious minorities. They recognized the importance of civil society and decided to further promote people-to-people exchanges with Asia-Pacific countries. . . .

In line with the 2011 U.S.-EU Summit commitment to increase "cooperation on political, economic, security, and human rights issues in the Asia-Pacific region to advance peace, stability and prosperity," they plan to intensify cooperation with Asia-Pacific partners to address regional and global challenges. To this end, both sides decided to continue the regular high level U.S.-EU dialogue on the region at the political and senior officials’ level.  (photo: Getty)