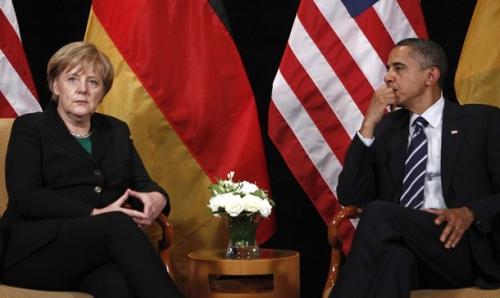 From Ian Bremmer and Mark Leonard, Washington Post:  [W]hy does a widening divide between Berlin and Washington threaten the entire Western alliance?

A fundamental shift in interests and outlook is leaving the United States and Germany with potentially irreconcilable differences. . . .

U.S. geopolitical ambitions and Germany’s geo-economic agenda are clashing. Eight­een months ago, Germany infuriated the White House by joining Brazil, India, Russia and China in abstaining on the U.N. Security Council proposal to create a no-fly zone over Libya. The decision provoked speculation that Germany wanted to shed its supporting role in the U.S.-led Western alliance in favor of the more independent, non-aligned and mercantilist-driven positions taken by leading emerging powers.

But the real rift had begun to open six months earlier, during the Group of 20 summit in South Korea. President Obama, who had spent weeks trying to rally developing countries behind the idea of global rebalancing, was taken by surprise when the German chancellor made common cause with China and other export nations to oppose this stance. The German abstention on Libya made no difference to U.S. plans, but at the G-20, Berlin and Washington stood on opposite sides of the most fundamental questions facing world leaders: How can governments rebalance the world’s trade relations, and should they stimulate demand or impose austerity? . . .

In the coming months, the United States and Germany are likely to become further estranged. Differences over how to refloat the global economy will become more obvious. U.S. officials may lecture their European counterparts on the need for sharing military burdens. Europeans are likely to insist that the demands of austerity do not allow them to spend more on militaries while cutting everywhere else. . . .

But the biggest challenge posed by the U.S.-German estrangement extends to the foundation of a liberal world order. Since the Cold War ended, the United States and Europe have advanced the principle that democracy, not single-party rule, is key to political stability and that market-driven capitalism, not state-directed development, is crucial for lasting prosperity. If the United States becomes less willing or able to advance these values abroad, and if Germany, Europe’s engine, allies with fellow creditors over fellow democracies, who will be left to advance the principles that have politically and economically empowered hundreds of millions of people since the wall fell?

Ian Bremmer is president of Eurasia Group and author of “Every Nation for Itself: Winners and Losers in a G-Zero World.” Mark Leonard is Director of the European Council on Foreign Relations and a public policy fellow at the Transatlantic Academy.  (photo: Reuters)