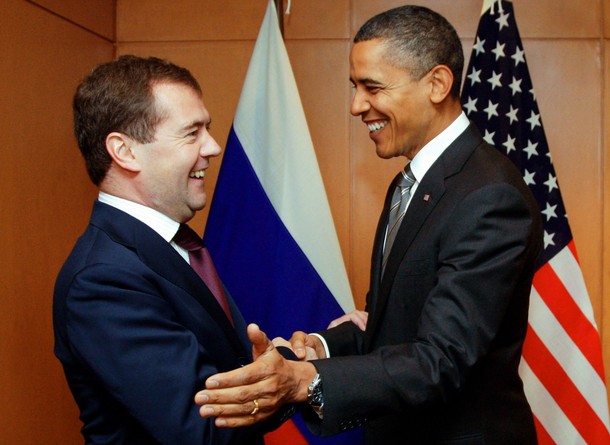 From Christi Parsons, the Los Angeles Times:  "It’s interesting," deputy national security advisor Ben Rhodes said in retrospect, "how a bilateral meeting at one summit is necessary to yield results at another. …"

The Nov.13-14 trip to Japan was devoted almost entirely to the Asia-Pacific Economic Cooperation summit. A meeting on the sidelines with [Russian President Dmitri] Medvedev was expected to be just another get-together for the two fortysomething lawyers.

That Sunday morning, the presidents and their top advisors arranged themselves around a long table in a small meeting room of the InterContinental Yokohama Grand Hotel and started talking about previously negotiated issues: Afghanistan, trade, the START arms treaty they’d signed but not ratified.

On missile defense, [President Barack] Obama knew that the negotiators in Brussels had not worked out the important issues, such as how to agree on common threats or resume joint-defense exercises. He turned the conversation there anyway. And as he did, advisors in the room were surprised by Medvedev’s demeanor.

"He was leaving himself wiggle room," said one senior Obama administration official who was there, "and not committing to anything. But he was clearly very friendly and open to what the president was saying. …"

Indeed, at the final summit of the month — of North Atlantic Treaty Organization leaders in Lisbon — the Russians shook hands on some surprising plans, although the details have yet to be worked out. Medvedev agreed to work toward cooperation with NATO on a missile shield designed to protect Europe and the United States, beginning with a study of each side’s technologies and how they might be interwoven.

Missile defense was no longer a problem in U.S. and NATO relations with Russia, Daalder said. Instead, it was now "a means to foster greater cooperation with Russia."

The plan is far from reality. Medvedev is imposing some conditions that have to be studied, and it may be more likely that the best result will be cooperative development of separate NATO and Russian missile defense systems.  (photo: Getty)