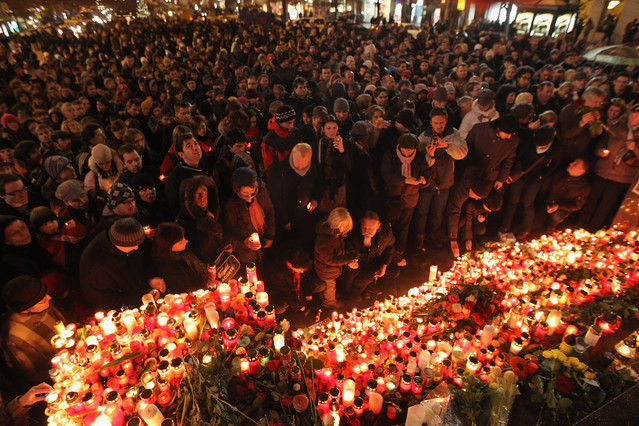 From J.Y. Smith, the Washington Post:  Vaclav Havel, a Czech writer who was imprisoned by his country’s communist rulers, only to become a symbol of freedom and his nation’s first president in the post-communist era, died Dec. 18 at his weekend home in the northern Czech Republic. He was 75.

The death was announced by his assistant, Sabina Tancevova, the Associated Press reported. Mr. Havel underwent surgery for lung cancer in 1996 and had suffered from lung ailments in recent months.

Mr. Havel was a playwright by profession and a political activist by avocation. The two activities were complementary, and each served to gain him a leading place among the dissidents of Eastern Europe who helped bring down the communist empire. His words and deeds resonated far beyond the borders of the former Czechoslovakia, and he was widely recognized for his struggles in behalf of democracy and human dignity.

After being unanimously elected president of Czechoslovakia by the newly free country’s Parliament in December 1989, Mr. Havel set the tone of the new era in a speech Jan. 1, 1990, his first day in office. Communism, he said, was “a monstrous, ramshackle, stinking machine” whose worst legacy was not economic failure but a “spoiled moral environment.”

“We have become morally ill because we are used to saying one thing and thinking another,” he said. “We have learned not to believe in anything, not to care about each other. . . . Love, friendship, mercy, humility, or forgiveness have lost their depths and dimension. . . . They represent some sort of psychological curiosity, or they appear as long-lost wanderers from faraway times.”

In July 1992, he resigned the presidency when it became clear that the country would be dismembered, with the Czech Republic and Slovakia, its eastern neighbor, going their separate ways. The split became formal on Jan. 1, 1993. About three weeks later, the new Czech Parliament called on the country’s most famous citizen to return to the presidency. He remained in office for 10 more years.

Although his office was largely ceremonial, Mr. Havel had wide-ranging influence. He was credited with a major role in providing political stability as the country’s economy made a relatively trouble-free transition from communist central planning to a free market. In foreign affairs, he was influential in gaining his country’s admission to the North Atlantic Treaty Organization.

But it was as a dissident that Mr. Havel first gained the world’s attention. For more than two decades, beginning in the 1950s, his books and plays were banned in Czechoslovakia. They nonetheless reached a large audience through the underground publishing network and broadcasts by the BBC and Voice of America.

From the Economist:  In what would be a hallmark of his political approach, he made a point of lending support to beleaguered but like-minded figures abroad. He invited the Lithuanian leader Vytautas Landsbergis to Prague, as that country struggled to turn its declaration of independence from Soviet occupation into reality. He brought the Pope to Prague, overcoming the neurotic anti-Catholicism and secularism of some Czechs, who remember the counter-Reformation and priestly privilege as if they were yesterday. He was a close friend of the  the Dalai Lama—almost the first foreign dignitary he received as president, and a visitor in the last days of his life. Others might counsel friendship with the mighty Chinese; for Havel matters of principle were just that. Having themselves been forgotten captives, the Czechs could not possibly forget the plight of the Tibetans, the Uighurs, the Belarusians and the Cubans.

Vaclav Havel, former President of Czechoslovakia, was honored in 2009 with the Atlantic Council’s Freedom Award on behalf of the people of the former Czechoslovakia.  Alexandr Vondra, former Foreign Minister of the Czech Republic, accepted the award on Havel’s behalf.  Here are Vondra’s remarks.  (photo: Sean Gallup/Getty)