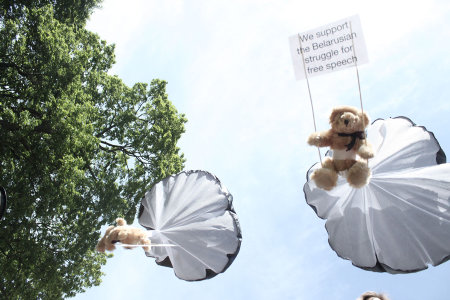 From Volha Charnysh, Belarus Digest:  On 4 July, Swedish amateur pilots penetrated Belarus’ airspace according to an email received by Belarus Digest. Their small aircraft crossed the Lithuanian-Belarusian border and parachuted hundreds of teddy-bears with notes of support for the freedom of speech. Covered by some Belarusian and Swedish media, but denied by the Belarusian authorities, the flight has generated more publicity than some of the pro-democracy initiatives by civil society groups and the EU in Belarus.

“We planned the operation for one year, bought an airplane, learned how to fly, had people on the ground that [sic] was supposed to help out if the plane got shot down,” Hannah Frey wrote in an email to Belarus Digest on 5 July. Frey and co-pilot Thomas Mazetti were not afraid to risk their lives – unlike Belarusians, some of whom are afraid to talk to the media and will neither deny nor confirm the incident.  . . .

The daring flight over Belarus unleashed several debates. One is whether the event reported in Belarusian and Swedish press has even occurred. The Belarusian defence ministry denied the entry of the aircraft and decried photos and videos provided by Studio Total as “visual falsification”. If the teddy-bears were simply hurriedly picked up by the Belarusian police upon landing, then Minsk is risking a huge embarrassment. The idea of dropping stuffed animals is catchy and memorable and even the people who have not seen the evidence for themselves are likely to remember the incident – of course, if they understand the message that the Swedish pilots risked their lives to send.

The residents of small Belarusian town Ivyanets who have witnessed the flight say all dropped teddy-bears were picked up by the police and taken away. . . .

Unnoticed by the Belarus air force, the Swedes safely returned home. It is no exaggeration to say that they had risked their lives during the operation: the Belarusian border guards would not have hesitated to shoot them down. In 1996, the Belarusian army shot down an unarmed air balloon, which drifted into Belarusian air space during an international balloon race.

The Belarusian military killed two Americans, and as former US Ambassador to Belarus Kenneth Yalowitz pointed out in a recent interview to Belarus Digest, they did not even apologise for the innocent lives lost. If back then President Lukashenka defended the shooting by claiming that the balloon was spying on military installations, he would have even less remorse after taking down a pro-democracy operation.

Volha Charnysh is the managing editor of the Belarus Digest and an Associate of the Davis Center for Russian and Eurasian Studies at Harvard University.  (photo: GOOD)