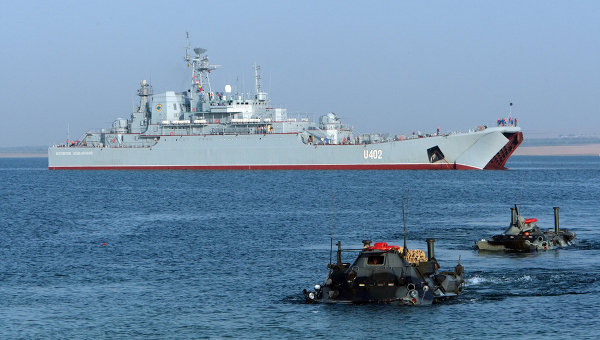 From RIA Novosti:  Fifteen Ukrainian, U.S. and Turkish warships sailed out of Ukraine’s Black Sea port of Odessa on Sunday to begin the active phase of the Sea Breeze 2010 exercises, the Ukrainian UNIAN news agency reported.

The military drills, focused on the planning and conduct of international anti-piracy operations, began in southern Ukraine on July 12 and will run until Friday.

The multinational headquarters is staffed by Ukrainian, U.S., Georgian and Moldovan officers and representatives of Azerbaijan, Belgium, Germany, Greece, Denmark, Moldova, Poland, Sweden and Austria are also at the exercises.

A statement by the headquarters said two Be-12 and one An-26 aircraft and an Mi-14 helicopter from the Ukrainian Navy’s aviation arm would also take part in Sunday’s drills, carrying out search, rescue and evacuation missions and providing air support for the ships.  (photo: Taras Litvinenko/RIA Novosti)