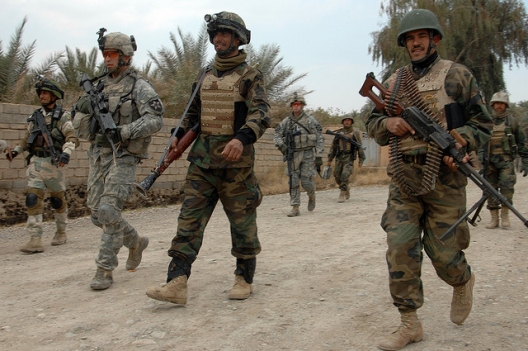 The difficult and dangerous task of retraining Iraqi security forces to take on the Islamic State militants who’ve made impressive gains in the north and west of Iraq will require large numbers of trainers from the United States and NATO nations , according to a person familiar with joint assessments by the American-led coalition and the Iraqi government.

The expanded retraining effort being proposed by the U.S. may require as many as 1,000 foreign trainers from the U.S., U.K., France, Germany and Australia to restore the beleaguered Iraqi security forces to a battle-ready state led by American advisers, said the person who spoke on the condition of anonymity because no decisions have been made. The U.S. already has about 1,500 advisers in the country, and Western European allies have signalled their ability to send hundreds of trainers each, the person said.

While the U.K. and France are participating in air strikes against ISIS and Germany is supporting Kurdish rebels in Iraq, getting their parliaments to approve sending ground troops into a warzone to train Iraqi forces is likely to be enormously complicated politically given the war-fatigue in Washington and other Western capitals.

Alongside the significantly expanded training mission, the U.S.-led coalition also wants to create an Iraqi national guard force of about two to three brigades or as many as 15,000 troops drawn from Sunni tribes in the Anbar province. Those militiamen reporting to provincial governors would be charged with keeping ISIS out of the Sunni heartland. Many of those tribesmen and their leaders participated in a 2006 uprising called the Anbar Awakening that helped the U.S. defeat al-Qaeda in Iraq, only to turn on the government of former Iraqi Prime Minister Nouri al-Maliki, who refused to pay the fighters or fold them into the standing Iraqi military after the violence subsided.

The U.S. has proposed that the guard units be recruited, trained and paid by Iraq’s Ministry of Defense, as opposed to the 2006 uprising when the U.S. recruited the tribes and had Baghdad pay for them, the person familiar with the discussion said. Some of Iraq’s Sunni Arab neighbors may help defray the cost of retraining Iraqi troops and for the national guard units, the person said.

The U.S. still is in the early stages of assembling an effective coalition to “degrade and ultimately destroy” the Islamic State, as President Barack Obama has described the mission. But getting countries to sign up while questions about the future of Syrian President Bashar al-Assad remain unanswered is at the heart of the Obama administration’s challenge. Many Sunni Arab nations and NATO countries want to see Assad go while Obama has declined to get the U.S. involved in what he sees as an intractable civil war in Syria.

The one issue on which many countries agree is the need for Iraq’s military – gutted as a result of Maliki removing talented Sunni officers and replacing them with Shiite loyalists – must be reconstituted to fight ISIS. Western officials, particularly in the U.S., were stunned by how rapidly the Iraqi army collapsed in the early stages of the ISIS assault, fleeing by the tens of thousands and leaving behind large quantities of American-provided weaponry. . . .

Defense officials from the U.S. and some European countries have said that without an effective ground force to supplement air strikes — 487 to date — the militant group’s advance cannot be halted. Last month General Martin Dempsey, the chairman of the U.S. Joint Chiefs of Staff, said nearly half the Iraqi military or 24 out of its 50 brigades were incapable of fighting ISIS.