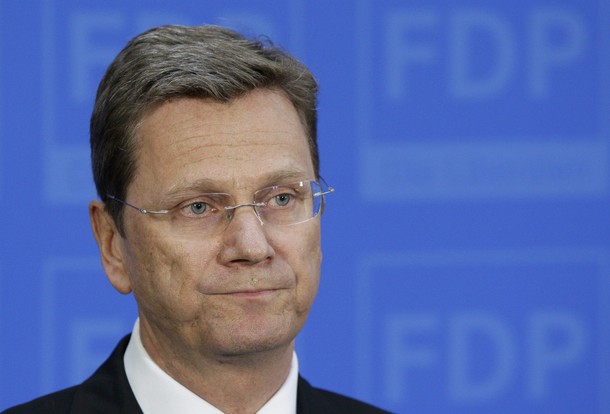 From Ralf Neukirch, Spiegel:  By contrast, the professor [Christian Hacke of the University of Bonn] contends that [German Foreign Minister Guido] Westerwelle — who was a protege of former Foreign Minister Hans-Dietrich Genscher — has embraced a "neo-German Wilhelminism," ; which he displayed in particular when he abstained from the United Nations Security Council resolution on an establishing a no-fly zone over Libya. Hacke says that Westerwelle engages in self-righteous grandstanding while, at the same time, cowardly running for cover. "He is the vainest, most narrow-minded and stubborn foreign minister since von Ribbentrop."

It is a monstrous allegation. Joachim von Ribbentrop was Hitler’s foreign minister from 1938 to 1945. In Hacke’s opinion, the consequences are perfectly clear: "Westerwelle must go because he can no longer properly represent German interests — and because we have to feel ashamed of him."

Most German diplomats probably wouldn’t compare the foreign minister to von Ribbentrop, but many would agree with Hacke that Westerwelle should go.

Westerwelle is widely seen as a failure, both in the Foreign Ministry and among foreign diplomats in Germany. It’s a similar story at Angela Merkel’s Chancellery. Hardly anyone understands why he wants to remain in the government until the end of the current term. . . .

Most recently, he made decisions in the Libya conflict that isolated Germany on the foreign policy front and created a rift within Germany’s governing coalition.

No other German Foreign Minister has been as unpopular as Westerwelle. . . .

Whatever the occasion — from diplomatic receptions to trips abroad and chance encounters — the normally highly reserved staff members of the Foreign Office don’t hold back on their negative comments about the foreign minister. "He hasn’t learned," says a veteran diplomat, "and he never will. . . ."

Merkel had backed the German abstention in New York. But she had not counted on Westerwelle immediately declaring that the abstention was an expression of a new German foreign policy. In her view, the indignation in Germany would not have been so pronounced if Westerwelle had done a better job of explaining the German government’s approach. She would have also been prepared to leave German ships stationed in the Mediterranean to supervise the arms embargo against Libya. . . .

Chancellor Only Informs Westerwelle When Necessary

Now, Merkel only informs Westerwelle when it is absolutely necessary. Her foreign policy adviser Christoph Heusgen handles important issues directly with the political director at the Foreign Ministry, Emily Haber. Heusgen and Haber have known each other for a long time and they work well together. Westerwelle is only formally involved in key decisions such as NATO’s strategic concept.

Translated from the German by Paul Cohen.  (photo: Reuters)