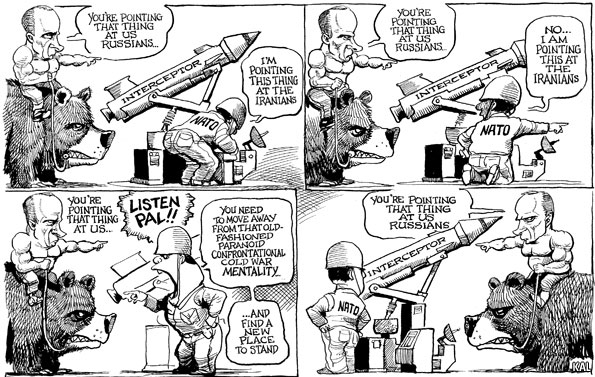 From the White House:  In September 2009, the President directed the European Phased Adaptive Approach (EPAA) for missile defense to be implemented in a NATO context.   At the Lisbon Summit in November 2010, NATO made the historic decision to endorse a missile defense capability whose aim is to provide full coverage and protection for all NATO European populations, territory, and forces against ballistic missile attack.  EPAA was welcomed as the U.S. national contribution to NATO missile defense.  NATO also agreed in Lisbon to expand its current missile defense command, control, and communications capabilities to be able to effectively integrate additional voluntary contributions from other Allies.  Since then, Phase 1 of the EPAA, including deployment of A radar in Turkey and an Aegis ship in the eastern Mediterranean, has been successfully achieved.

In Chicago, NATO declared the achievement of an Interim Capability for NATO ballistic missile defense, an important step towards fulfilling the commitment made at Lisbon. This means that NATO has initiated a capability that, although limited in its initial phase, can provide real protection against ballistic missile attack.  With initial NATO command and control procedures in place, the President has directed the Secretary of Defense to transfer operational control of the U.S. radar in Turkey to NATO. The radar’s information, combined with the NATO command and control system, gives NATO missile defense commanders a comprehensive and real-time operational picture, enabling them to employ the available missile defense assets effectively.

What does Interim Capability mean?