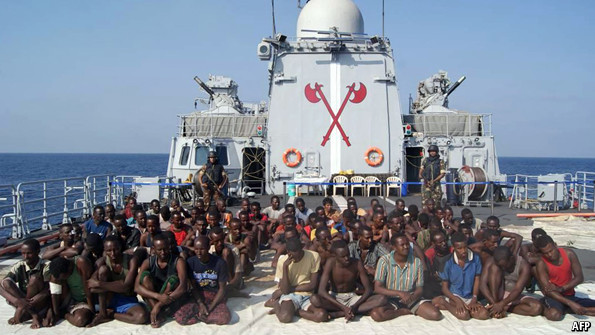 From Economist:  On May 10th pirate-busters celebrated the fact that one year had passed since a ship was successfully seized by Somali hijackers.   . . .

Why are the pirates at bay?  Though the spoils are rising, pirate attacks have been falling off. Just 75 attacks took place in the Gulf of Aden and off the coast of Somalia in 2012, down from more than 200 in 2011. . . .

[T]he main reason for the drop in maritime hijackings seems to be that ships are now far better defended against attacks. Armed guards, now carried by more than 60% of vessels, have been essential in discouraging them. Pirates are playing it safe by first scouting for guards, whereas previously they opened fire to intimidate crews; seeing arms on board is a big deterrent. Higher cruising speeds in pirate-infested zones and rerouting also have helped, as have razor wire, high-pressure hoses and citadels—secure spaces on ships from which crews can call for reinforcements. (This makes it easier to come to the aid of ships under attack, because pirates can no longer use seafarers as human shields.) Navies patrolling the area, from EU task-forces to private motherships, are also co-operating better and acting more aggressively.

All these gains are “fragile and reversible”, says Jon Huggins, director of Oceans Beyond Piracy, an American NGO. The EU and NATO navy mandates expire at the end of 2014.   (photo:AFP