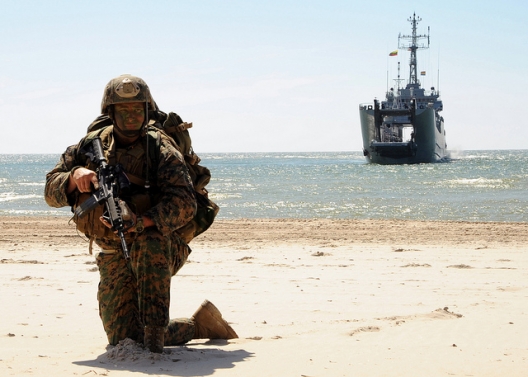 In times of tension with Russia, security for the other Baltic Sea states is highly dependent on external allies. Often, the distinction between the United States and NATO is blurred in this regard, hence obscuring the roles that each actor actually plays in the security of the region.

For example, at a conference in Tallin in April 2015, Estonia’s Prime Minister Taavi Rõivas responded to a question on whether NATO would evoke Article 5 in the defense of the Baltics by saying, “I have got the word from the U.S. president so I can be sure.”

In Sweden, the government in the summer of 2015 took an initiative to deepen and increase defense cooperation with the United States, based partly on an assumption among leading Social Democrats that NATO will be (too) slow to act in case of a crisis in the Baltic Sea region, and that bilateral arrangements with the U.S. are the most crucial for Sweden’s security.

At the same time, there is a strong belief in the Swedish public that their nation will receive fast external assistance in case of an armed attack, despite the fact that the Americans have been very clear that there is no such planning, nor preparations anymore, as existed during the Cold War.

So who will defend the Baltics? How can the relation between NATO and the U.S. with regard to Baltic Sea security be understood?

Short-term threats a challenge in the region
In adapting to the Russian threat, NATO is in a situation when a broader group of its members (with different interests) need to agree than during the Cold War, while the U.S. is exerting less visible political leadership in the Alliance than before. This lack of consensus slows NATO down in three main ways: it makes it more difficult to agree on the strategic compass, it decreases the pace of military and hybrid transformation, and it prolongs the political decision making process, in an era where developments tend to proceed extremely fast. In spite of these difficulties, NATO is still showing enough political cohesion to move forward.

A new NATO-Russia strategy is needed to guide the military and political action in a coherent manner and provide a continued focus on the region in coming years. Such a new strategy will make it possible to develop solid NATO structures, covering both conventional and hybrid warfare, that will contribute to the long-term security of the Baltic Sea states. The dilemma is that while NATO is likely to improve to a sufficient level in the long term, a revisionist and externally aggressive Russia poses a short-term threat to the Alliance, not least with established anti-access/area denial (A2/AD) in Kaliningrad.

Strong partnerships an asset for security
The partnerships that were a pillar of the “new” NATO developed in the post-Cold War era for cooperation in international peace missions, are of particular interest in the region as well, where Sweden and Finland are as interoperable as most NATO members. Some strategic initiatives on how to view the Baltic Sea region as one military playing field, have been taken within the Enhanced Opportunities Program (EOP) with Sweden and Finland; for example areas of cooperation such as the exchange of situational awareness in the region, the exchange of information about hybrid warfare, connection with the NATO Response Force (NRF), and coordination of training and exercises in the region.
The further development of military and political interoperability with regional partners, in combination with the Host Nation Support agreements signed between NATO and Sweden and Finland respectively, is of obvious value for increasing security cooperation and the combined threshold level in the Baltic Sea area.

The U.S. regional interest part of global agenda
The options for unilateral or multilateral responses in the Baltic Sea region exist in parallel, and they are closely interlinked. While the U.S. has the capacity and leadership skills to act fast, NATO has the infrastructure and processes to carry out long-term operations.

For the U.S., responding to security threats in the Baltic Sea region is ultimately about the credibility of its global foreign policy and position as a superpower, in which NATO and its obligations is one of several American commitments around the world.

Nowadays, the U.S. is used to act fast, leaving slow starters behind if necessary, confident that they will come around. That is exactly what happened in March 2014 in response to Crimea. On supporting security in the Baltics, the U.S. was the first to act, and it did it on its own, rather than to wait for NATO allies to come along.

American leadership within NATO is still obvious on the military side, not least on assurance measures. America’s military response to the increased threat perception on the European continent has been substantial. “We are reconnecting to Europe”, as a senior American diplomat put it. However, it is obvious that there is a clear difference between military and political engagement. The Americans do not lead the discussions in NATO´s committees as strongly as they used to during the Cold War. There is a lack of American strategy of how “reconnecting” to Europe should evolve and how it fits into the bigger picture of restructuring European security to encompass the new circumstances of instability and unpredictability.

American support for the region can be expected
When it comes to Baltic Sea security and the involvement of Sweden and Finland in this regard, the Americans are committed, engaged, and apparently willing to put priority into the issue. Hence, the vagueness that tends to characterize American political direction in NATO is relatively less noticeable in the case of security in the Baltic Sea region. At the same time, the lack of strategy on the European scale implies that it would be too much to expect the Americans to develop a strategic outlook for the Baltic sub-region. This clearly has to be driven by the regional actors themselves within the NATO framework. Despite the current threat level, the United States will need to be continuously reminded of the importance of its engagement in the area. If it is, continued American support could be expected.

Can the Baltic Sea region count on the United States in the future? Yes, the U.S. is not likely to opt out of the Baltics. While the region is too small for the global superpower to focus fully on, it will never completely leave it either. However, due to the global agenda of the U.S., the American response is likely to be temporary and scalable in character. In addition, with strained resources and broader global commitments than before, the United States will have to calculate its response carefully, and in the case of the U.S. initiating unilateral action, expectations on follow-up support from European allies will be substantial,

Anna Wieslander is former deputy director of the Swedish Institute of International Affairs. This text builds on a longer report recently published: Wieslander, A. (2016) NATO, the U.S. and Baltic Sea Security, UI Paper, No. 3, February, 2016.