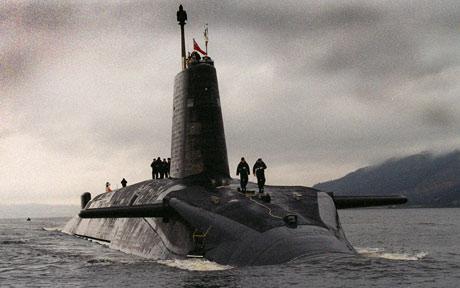 From George Kerevan, the Scotsman:  [A]t its Chicago summit in May, under heavy German pressure, Nato altered its so-called “deterrence and defence posture”. Instead of a traditional refusal to give a “no-first-strike” guarantee, Nato now promises never to use nuclear weapons against a country that does not possess them, and is a signatory of the UN non-proliferation treaty (that means Iran, by the way). The Chicago summit also adopted – for the first time in any military alliance – a commitment to make nuclear disarmament a constituent part of its strategy.

Bill Ramsay, the organiser of SNP CND, is not impressed. He argues the German campaign will be thwarted by the United States. But Washington cannot impose its will on the European members of Nato. General De Gaulle threw the Americans and their nukes out of France in 1966. Besides, the number of US tactical nuclear weapons in Europe has declined since the end of the Cold War from about 2,500 to a token 200 bombs. This compares with some 2,000 still deployed by Russia.

What Ramsay misunderstands is that Germany’s pressure to remove tactical nukes from Europe is not a one-sided demand that the US takes its bombs home. The Germans want to remove the Russian weapons at the same time. The quid pro quo for the Russians shifting theirs to the other side of the Urals is that the US’s go to Nevada. A neutral Scotland will be irrelevant to that debate. In fact, Scotland quitting the alliance now reduces Nato’s diplomatic credibility when negotiating over Russian nukes.

What are the chances of a new round of nuclear arms reduction talks between Russia and Nato? It is certainly needed, and soon. Most of the existing treaty obligations to cut warheads and do on-site inspections are now legally time-expired. Or, in the case of the US’s unilateral (and destabilising) withdrawal from the anti-ballistic missile treaty, redundant. Russia has threatened to withdraw from the 1987 INF treaty abolishing short and medium-range missiles. Which means it could add nuclear tips to its new, highly accurate, highly mobile Iskander missile system – the replacement for the infamous Scud rocket. The Iskander was used (with conventional warheads) in Georgia in 2008, when the Russians invaded. No-one these days thinks a nuclear war in Europe is a realistic possibility. But Russia’s invasion of Georgia (which has a population the size of Scotland), and its cyber-attack on Estonia in 2007, are proof positive Moscow thinks it can bully small countries and get away with it. Russia keeps tactical nukes as a diplomatic big stick.

Pretending Nato is solely to blame for nuclear weapons is naïve. Pretending an independent Scotland that repudiated Nato could fend off Russian bullying in the oil-rich North Atlantic is a dangerous gamble. And pretending a majority of Scots will vote for independence plus neutrality is political fantasy.

Getting Moscow (and Washington) to the negotiating table will be difficult. But I think Scotland should be part of making it happen. Independence, after all, is not about leaving the UK. It’s about joining the world.  (photo: Royal Navy)