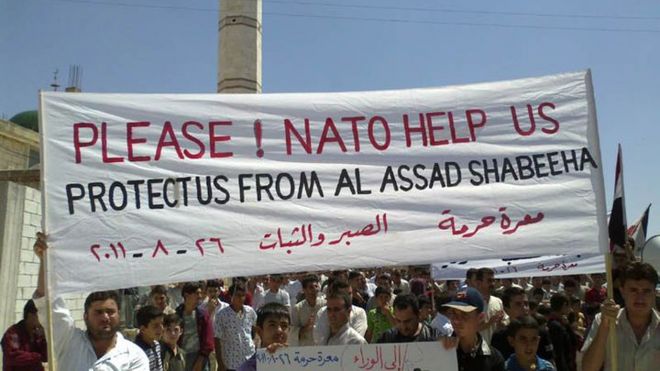 From James Joyner, New Atlanticist:  NATO secretary general Anders Fogh Rasmussen reiterated Friday that the Alliance will not intervene militarily in Syria. While he repeatedly made the same assurances regarding Libya before NATO’s ultimate action, there’s good reason to believe him this time.

First, as Rasmussen noted, "There is a clear difference between Libya and Syria. We took responsibility for the operation in Libya based on a very clear United Nations mandate to protect the civilian population and we got active support from countries in the region. None of these conditions are fulfilled in Syria." Both NATO and the Obama administration have consistently pointed to the need for Security Council coverage and regional backing. Neither will be forthcoming for Syria. Russia, which holds veto power, has doubled down on its support for the Assad regime. And the region is divided, with Saudi Arabia, Qatar, Turkey, and Al Qaeda siding with the rebels and Iran, Iraq, and Hezbollah backing the government.

Second, and more fundamentally, with the possible exception of Turkey, no major NATO ally has a national interest in taking on this fight. The near-universal Western view at the outset of the conflict, of a popular uprising of freedom fighters ushering in an Arab Spring, has given way to a much gloomier and pessimistic outlook.

Gideon Rachman of the Financial Times quotes "one EU minister" explaining, "We thought we were dealing with democratic protests that would topple Bashar al-Assad very quickly." Two years later, he’s still standing and seems to be gaining ground. Another "western minister" tells Rachman, "The Russians kept telling us we were naive, and maybe we were."

Essentially, while virtually all in the West view Assad as the clear bad guy, there’s not much sense of who the good guys are. The National Coalition, the only opposition entity with something like universal Western backing, is led by exiles and has zero chance to emerge as a significant player in any post-Assad government. Meanwhile, the dominant rebel factions look increasingly scary. As Atlantic Council senior advisor Harlan Ullman warns, "history suggests that the elements most hostile to the West and most compatible with Islamic extremism are likely to dominate. . . ."

Certainly, NATO publics are not pressuring their governments to intervene. A new Gallup survey shows 68 percent of Americans oppose any use of military force. This, despite 58 percent in the same survey believing diplomatic efforts will not resolve the conflict. A new Observer/Opinium poll of Britons found fully 78 percent opposing any intervention, with even supplying of arms to the rebels garnering only 24 percent approval. And a March Pew poll found opposition from 82 percent of Germans, 69 percent of Frenchmen, and even 65 percent of Turks. . . .

There’s a reverse Pottery Barn Rule in effect here: If we didn’t break it, we don’t own it.

James Joyner is managing editor of the Atlantic Council. This essay was originally published by The National Interest.  (photo: AP)