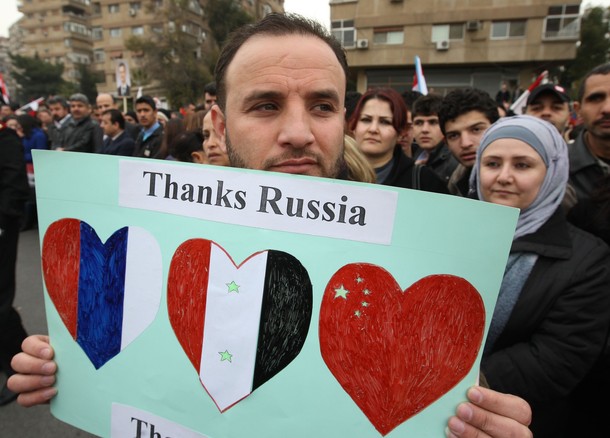 From Dimitri Trenin, the International Herald Tribune:  The Russian government is openly conservative; it abhors revolutions. This, however, is more than a self-serving ideological stance. When the Kremlin — or [director of Foreign Intelligence Mikhail] Fradkov’s office — looks at the Arab Awakening, they see democratization leading directly to Islamicization.

If the West’s historical analogy is Europe’s 1848 or 1989, theirs is Russia’s 1917. They cite recent election results in Tunisia and especially Egypt. They point out that post-Qaddafi Libya is chaotic, with a lot of the former regime’s weaponry finding its way into unsavory hands. In their view, Syria’s uprising could have even worse consequences in terms of sectarian violence and the potential to affect the country’s neighbors, particularly Lebanon and Israel.

Revolutions are bad enough, in the Kremlin’s view, but attempts to interfere in other countries’ civil wars can only make things worse.

The Russians appreciate that the United States and other Western powers would only intervene militarily if they could sustain zero losses themselves, as in Libya. Syria, however, is a more difficult case. Arming the Free Syria Army and providing it with intelligence will not be enough to prevail over Assad’s forces. A prospect of a wider war with Arab and Turkish participation looms on the horizon.

Such a war could only make sense if it were the first act of a more serious drama. Russians suspect that the real reason for the West’s pressure on Damascus is to rob Tehran of its only ally in the region. Behind the activity of the Gulf States, particularly Qatar, in the Syrian issue Moscow sees the rising regional influence of Saudi Arabia, Iran’s bitter rival in the region. Turkey’s “neo-Ottoman” ambitions are also playing a role. What the Russians are most worried about, however, is that Israel may strike at Iran, dragging in the United States and thus precipitating a major war with Iran sometime this year.

Russian policy makers may have a point or two when they discuss other people’s policies. They need, however, to step back and look at their own.

Delivering arms into a country going through civil war is damaging, both politically and morally. Confronting both America and Europe, even if Western policies are misguided, is clearly at odds with Russia’s wider interests. Telling Qatar to shut up is not merely undiplomatic, but unwise. And openly quarreling with Turkey and Saudi Arabia has to be avoided.

To this, some would say that, having lost $4 billion in Libyan arms and other contracts and facing the prospect of losing an equal amount in potential Syrian trade, Moscow has no other choice but to take a hard line. It will be a pity if, at the end of the day, this argument prevails.

Dmitri Trenin, director of the Carnegie Moscow Center, is the author, most recently, of “Post-Imperium: A Eurasian Story.”