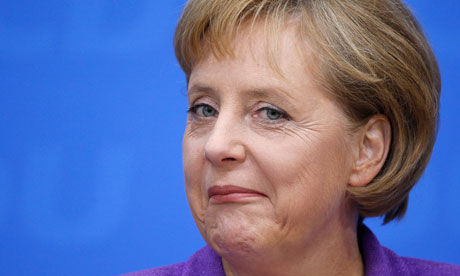 From Josef Joffe, the Guardian:  The whole world is in the deepest economic mess since the Depression. Growth in the US is measly, weaker still in Britain. The eurozone is down to zero. China and India, superpowers-in-waiting, are being demoted to so-so status. German growth will clock in at 1% this year. And yet Berlin will save them all?

This is a wonderful, but silly compliment. It becomes sillier still in view of the prescriptions. One comes straight out of Keynes’s dusty repertoire: spend and pump money. Or be as profligate as all your eurozone neighbours. Let the European Central Bank flood Europe with liquidity, never mind that interest rates are at a historic low. Jump-start the economy by jacking up your deficit, let your wages rise above productivity to generate demand. In other words, do precisely what was done in the crisis countries from Ireland to Greece. Don’t be Germany, go Piigs by turning extravagance into a European virtue.

The other remedy would have Germany all but assume everybody else’s debts. This is the central idea behind the "banking union" and "eurobonds". The union would act as one huge deposit-insurance scheme that would prevent bank runs. Eurobonds, spreading the risk across the eurozone, would make borrowing cheaper for Spain, Italy et al. In theory, these are heartening ideas – like the Three Musketeers’ motto "all for one, and one for all". In practice, there is no "all", there is only one: Germany.

At the last count, according to Credit Suisse, Berlin is already good for €400bn, 11% of its GDP. What’s fair and square when the net foreign debt of the eurozone is €1.1tn? Mrs Merkel is right when she says: "Even Germany’s resources are not unlimited."

With great power comes great responsibility; this is true. But Merkel’s tormentors – mainly US and British economists – would have a much more compelling case if they could show that Keynesianism to the max has worked in their countries. Yet 10% deficits (now declining) have not turned the tide of unemployment in the Anglo world, nor have trillions in extra liquidity. Straight Euro-welfare does not work either, as the Spanish case shows. Hardly had Madrid pocketed €100bn for its sinking banks, when yields on its 10-year bonds shot up again to record levels. . . .

In the end, alas, mighty Mrs Merkel is not the driver, but the driven. She has drawn so many lines in the sand, and abandoned them all – starting with the no-bailout clause of the treaties on monetary union. For all her tough language she may well yield again, as she did on the €100bn for Spain. She may yet accept the banking union as well as (re-labelled) eurobonds. It is the consuming fear of cataclysm unknown that drives her. Yet angst will not save Europe. Only change will, so help demands conditionality.

You want us to guarantee your bank deposits? Then you must accept stringent oversight. You want cheap credit? Then show us that, like an insolvent company, you are restructuring by shedding costs and improving productivity. Is that Teutonic arrogance? It is as arrogant as Chapter 11 in US insolvency law: protection from creditors and new funds in exchange for bona fide efforts. It is pain before profitability.  (photo: Wolfgang Rattay/Reuters)