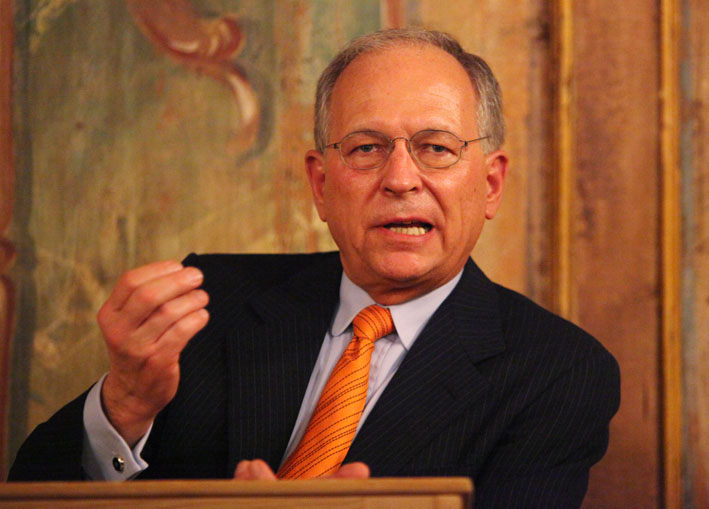 From Deutsche Welle:  Respected diplomat Wolfgang Ischinger talks about Germany’s decision to abstain from the UN Libyan vote and why despite the success of the NATO intervention, we won’t likely see a spate of similar missions soon.

Deutschlandfunk radio’s Jürgen Liminski talked to Wolfgang Ischinger, a former top diplomat and current chairman of the Munich Security Conference, about the role of military intervention and Germany’s position after having stood on the sidelines in the conflict.

Jürgen Liminski: Mr. Ischinger, NATO has been successful in Libya, and the Libyan rebels might not have been able to topple the Gadhafi regime without NATO’s help. Germany, however, declined to participate. How much damage to its image in the eyes of its allies has Germany suffered?

Wolfgang Ischinger: Joschka Fischer and others who have commented shouldn’t get carried away with things. It’s not really correct to talk about the worst foreign policy debacle in Germany’s post-war period.

You could also take a look at the failure of the Lisbon Treaty and a few other problem areas. But yes, of course, these kinds of developments, or this kind of going it alone, do not exactly build confidence. Trust and predictability are essential elements in foreign policy and they’re certainly not secondary virtues. So this is not a time of celebration when it comes to Germany’s own foreign policy.

Jürgen Liminski: Do you get the sense that German is now considered unpredictable by its NATO partners?

Wolfgang Ischinger: Of course Germany should not become NATO’s problem child, by the way, neither with NATO or the European Union. But I don’t think we should be seen as unpredictable in this particular case. First of all, we are certainly not the only NATO partner who stayed out of the military intervention in Libya. Second, and it’s important to remember this, the concerns Berlin had about whether military action in Libya limited to air strikes and so forth was justified given the circumstances was also a cause for concern for the then American defense secretary, Robert Gates.

The fact that the mission lasted many months, just like the Kosovo mission did, leads to the conclusion that these kinds of military interventions limited to airstrikes should only be pursued in emergency cases. This is not standard procedure. . . . (photo: Körber Stiftung)