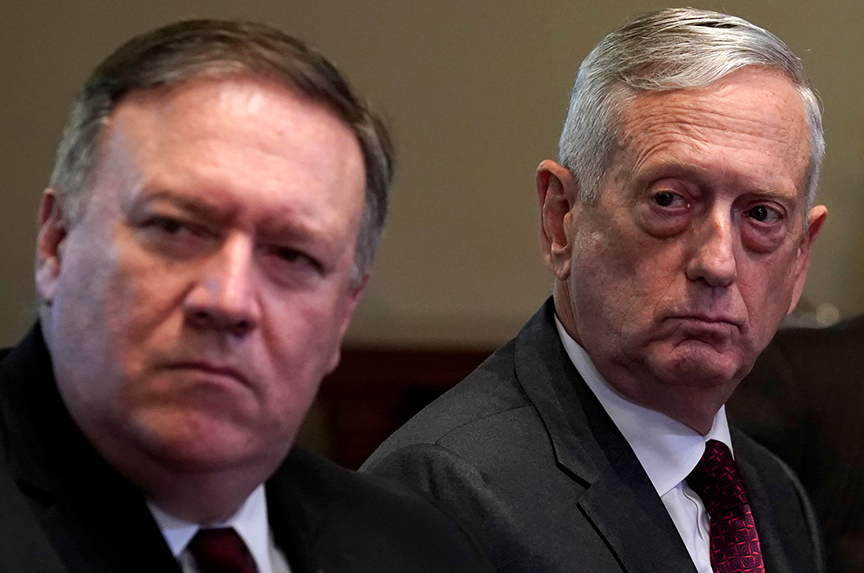 US Secretary of State Michael Pompeo (left) and US Secretary of Defense James Mattis will participate in the 2+2 dialogue in New Delhi on September 6. (Reuters/Kevin Lamarque)

Differences over Iran sanctions and trade are holding back the relationship

On September 6, US Secretary of State Michael Pompeo and US Secretary of Defense James Mattis will participate in the inaugural 2+2 dialogue in New Delhi—a symbolically powerful reminder of growing ties between the United States and India. The relationship has, however, become beset by major challenges that should be addressed to ensure the upward trajectory of the strategic partnership.

Twenty years ago, in May 1998, India conducted its first nuclear tests. The United States responded with economic sanctions on a country that it viewed as a potential security threat in the region. Three years later, in 2001, the George W. Bush administration’s discussions on lifting the sanctions marked a turning point in the US-India defense relationship. With an eye on a rising China, US policymakers began to accept the importance of India’s strategic role and look at what it would mean to work together to maintain stability in the region.

By January 2004, the United States and India had announced the Next Steps in Strategic Partnership (NSSP) initiative that would provide a framework for cooperation on three specific areas—civilian nuclear activities, civilian space programs, and high-technology trade.

The US-India relationship has since witnessed an incredible journey. The strategic vision articulated in the Free Indo-Pacific Strategy of US President Donald J. Trump’s administration offers an opportunity to elevate the relationship to new heights. However, disagreements over trade and US sanctions on Iran pose major challenges.

New Delhi and Washington remain at odds over the Trump administration’s decision to reimpose sanctions on Iranian oil exports. These sanctions will come into effect on November 4. Iran is the third-largest supplier of crude oil to India, which imported 22 million tons from the Islamic Republic in 2017-18. Barring a compromise, New Delhi will soon be faced with severe supply chain disruptions as it is forced to choose between halting oil imports from Iran or facing US sanctions.

For its part, the Trump administration is eager to display resolve in its efforts to limit Iranian oil exports and to force the regime in Tehran back to the negotiating table. Washington has been vocal in its call for a drastic reduction in Iranian oil imports and cannot afford to back down without concessions from New Delhi.

Diplomatic and economic stakes are high for both the United States and India. The looming impasse threatens to undermine years of goodwill. It is, therefore, imperative that a compromise be reached in the upcoming dialogue in New Delhi. The Trump administration should consider granting a temporary waiver to India in exchange for a reduction in crude exports originating from Iran. In return, policy makers in India must diversify energy imports and reduce reliance on Iranian oil. Opportunities for diversified consumption exist across a range of suppliers in the Middle East, where India maintains historically strong ties.

Ongoing trade tensions should also be addressed. India has lodged a formal complaint with the World Trade Organization over the Trump administration’s decision to impose tariffs on steel and aluminum. It is also preparing retaliatory tariffs of up to seventy percent on key US agricultural exports. Additional rounds of tariffs are reportedly under consideration.

Yet neither the United States nor India have an incentive to escalate a costly trade dispute with a strategic partner. India has delayed the implementation of retaliatory tariffs from August 4 to mid-September in an apparent bid to pursue a resolution through the 2+2 dialogue. A de-escalation of trade tensions will offer the Trump administration an opportunity to claim a perceived win on trade while quietly retreating from a counterproductive conflict.

Policy makers from both countries will need to make difficult compromises if they are to manage these critical differences. But if these challenges are addressed it will unlock for the United States and India a mutually beneficial opportunity to further elevate their strategic partnership and advance mutual interests in the Indo-Pacific region.