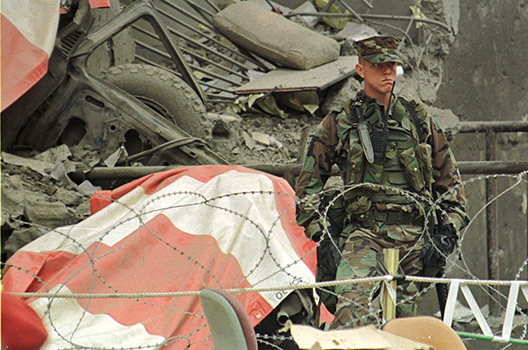 It has been twenty years since that morning of August 7, 1998, when suicide bombers detonated, almost simultaneously, trucks laden with explosives outside the United States embassies in Nairobi, Kenya, and Dar es Salaam, Tanzania. The attacks, the first claimed by al-Qaeda against US targets, left 224 people dead, including a dozen Americans, and around 5,000 wounded. While the bombings took place eight years to the day after US troops arrived in Saudi Arabia in the wake of the Iraqi invasion of Kuwait—Osama bin Laden took offense at the presence of American forces in the land of the Muslim holy cities of Mecca and Medina—they also opened in Africa what would become a major front in what only came to be recognized in the years after 9/11 as the “long war” against jihadist militancy.

It is nowadays often forgotten how little regard there was in policy circles before the embassy bombings to Africa’s strategic importance. In fact, the view of many during the Clinton administration—expressed in a Pentagon document entitled “United States Strategy for Sub-Sahara Africa” no less— was to refrain from too much engagement on the African continent because they could “see very little traditional strategic interest in Africa” and were convinced that “America’s security interests in Africa are very limited.”

In contrast, leading jihadist strategists speculated about the opportunities that the state fragility and other vulnerabilities of African states afforded them to establish cells, recruit members, obtain financing, and find targets as well as hiding places on the continent. Al-Qaeda’s online magazine, Sada al-Jihad (“Echo of Jihad”), even published an article by one Abu Azzam al-Ansari entitled “Al-Qaeda is Moving to Africa,” in which the author asserted: “There is no doubt that al-Qaeda and the holy warriors appreciate the significance of the African regions for the military campaigns against the Crusaders. Many people sense that this continent has not yet found its proper and expected role and the next stages of the conflict will see Africa as the battlefield.”

Abu Azzam rattled off what he perceived to be significant advantages to al-Qaeda shifting terrorist operations to Africa, including: the fact that jihadist doctrines have already been spread within the Muslim communities of many African countries; the political and military weakness of African governments; the wide availability of weapons; the geographical position of Africa vis-à-vis international trade routes; the proximity to old conflicts against “Jews and Crusaders” in the Middle East as well as new ones, where the author almost gleefully welcomed the possibility of Western intervention; the poverty of Africa which “will enable the holy warriors to provide some finance and welfare, thus, posting there some of their influential operatives”; the technical and scientific skills that potential African recruits would bring to the jihadist cause; the presence of large Muslim communities, including ones already embroiled in local conflicts with Christians or adherents of traditional African religions; the links to Europe through North Africa “which facilitates the move from there to carry out attacks”; and the fact that Africa has a wealth of natural resources, including hydrocarbons and other raw materials, which are “very useful for the holy warriors in the intermediate and long term.” Abu Azzam concluded with an unequivocal assessment:

In general, this continent has an immense significance. Whoever looks at Africa can see that it does not enjoy the interest, efforts, and activity it deserves in the war against the Crusaders. This is a continent with many potential advantages and exploiting this potential will greatly advance the jihad. It will promote achieving the expected targets of Jihad. Africa is a fertile soil for the advance of jihad and the jihadi cause.

As I noted in Congressional testimony last year, jihadists have been pursuing this African strategy since the attacks on the two embassies. Moreover, by skillfully conflating local grievances and global narratives, they have stoked conflicts and fueled insurgencies across the continent. Thus, since 1998, we have seen how the Algerian Salafist Group for Preaching and Combat was transformed into al-Qaeda in the Islamic Maghreb (AQIM), al-Shabaab in Somalia pledged allegiance to bin Laden’s successor, Nigeria’s Boko Haram did likewise to the so-called Abu Bakr al Baghdadi and began branding itself as “Islamic State West Africa Province” (ISWAP), and, most recently, a breakaway faction of the Sahel region’s al-Murabitun became “Islamic State in the Greater Sahara,” the group held responsible for the deadly ambush of US Special Operations Forces last year in Niger.

And what have we learned?

First, Africa matters, not only because the enemy continues to identify and exploit the continent’s resources and vulnerabilities, but geopolitically and strategically in its own right as the home of fifty-four states—including six of the ten fastest growing economies in the world—whose population will make up one-fourth of the working aged persons on the planet by 2050. As the Trump administration’s National Security Strategy noted: “The United States seeks sovereign African states that are integrated into the world economy, able to provide for their citizens’ needs, and capable of managing threats to peace and security. Improved governance in these states supports economic development and opportunities, diminishes the attraction of illegal migration, and reduces vulnerability to extremists, thereby reducing instability.”

Second, given the increasing importance of Africa in general as well as the specific relevance of the continent’s peoples and states in any calculus US strategic interests, it is no wonder that, ten years after the 1998 attacks, the US Africa Command (AFRICOM) was established to oversee military operations there. On the other hand, while the security challenges in Africa are very real, it does not necessarily mean that every jihadist militant on the continent poses the same danger to the United States and its allies. Consequently, recent plans to scale back Special Operations missions in the AFRICOM theater and focus resources on truly high-value targets and training of partners strike an appropriate balance.

Third, African partners are the key to success in the long term. Insurgencies can only be defeated by legitimacy and part of the recipe for that is local forces taking ownership of the defense of their own people. The United States and other countries can certainly help build capacity, but these efforts presuppose political will on the part of African governments. The struggles of a long succession of ineffective and corruption-ridden, albeit internationally-recognized, Somali regimes is a case in point.

Fourth, as US commanders, including General Thomas D. Waldhauser, AFRICOM’s current chief, have been quick to recognize, success in the fight against jihadists and other extremist militants in Africa requires diplomatic and other non-military resources, as well as the effective application of hard power on the battlefield. Alas, these military professionals’ worries about decisions that “diminish US influence by undermining our development and diplomatic efforts in Africa,” have often fallen on deaf ears. To cite just one example, it is mind-boggling that in Nigeria, Africa’s most populous country and its biggest economy, there is no US diplomatic presence north of the capital of Abuja, located in the country’s geographical center. Thus, the entire northern part of the country, which is home to more than ninety million predominantly Muslim people who would, by themselves, constitute Africa’s third most-populous country—and in the middle of the geopolitically sensitive Sahel region at that—has been entirely bereft of US diplomatic presence (and the ongoing intelligence and other monitoring capabilities that come with such a mission) ever since the consulate in Kaduna was closed in 1991 for budgetary reasons.

The challenge of terrorism in Africa cannot be addressed except in an integrated fashion, with solutions that embrace a broader notion of human security writ large—encompassing social, economic, and political development—which, often enough, also must transcend the continent’s national and other artificial boundaries. This obviously is not and should not be a task for the United States alone, but is, nevertheless, one which, as the attacks in Nairobi and Dar es Salaam made all too clear, is very much in America’s long-term strategic interest to do its part.

Image: A U.S. Marine secures the site of the U.S. Embassy building in Nairobi after a damage due to a bomb blast in Nairobi, Kenya August 12, 1998. (REUTERS/Antony Njuguna/File Photo)