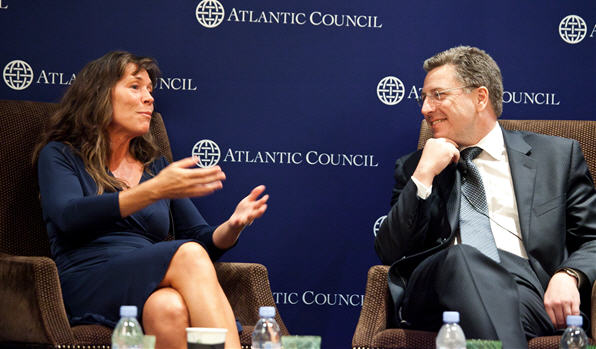 Kori Schake is the former Director for Defense Strategy and Requirements at the National Security Council.  She is currently a research fellow at the Hoover Institution and an associate professor of international security studies at the United States Military Academy.  I had the opportunity to discuss her thoughts on some key issues of interest to the Atlantic Council community.

At a recent Atlantic Council conference, you discussed the future of NATO.  How do you view the state of the alliance?

I am upbeat about the state of the alliance because of how NATO is responding to three key issues. The first of these is austerity, the significant cuts in defense spending being faced by all NATO members.  I believe that this downward pressure on defense budgets will make governments appreciate the value of joint defense.  The second issue is Afghanistan, where the difficulties of achieving our goals have increased appreciation for allied willingness to share the burdens.  Third is Russia; less because of Russian behavior than the diminished friction among NATO allies about Russia policy.

How well is NATO responding to the large scale of cuts in defense spending?

NATO is facing a serious challenge.  All of the allies made the easy cuts in defense spending five years ago.  The choices being faced now are much harder to make.  Hopefully, these hard choices will force the allies to improve transatlantic cooperation in defense.  Otherwise, we could see the return of the burden-sharing debates of the past.  But in the current political mood of the U.S. public, there may not be sufficient support to maintain a continued U.S. military presence in Europe.  Even though it only costs about 8% more to base our troops in Europe than in Texas.

You identified Russia as one of the three most important issues facing NATO.  What is the key to NATO’s relationship with Russia?

The problem of NATO-Russia relations is Russia and it has been for the last ten years.  Russia wants to control the off switch on NATO policies such as missile defense.  Only changes in Russia’s intransigent policies toward NATO will make decisive progress possible.

Which bilateral relationships are the weakest in NATO and have the greatest impact on the effectiveness of the Alliance?

This is a terrific question.  I would say the relationship between Britain and Germany.  Traditionally, the Franco-German relationship was the driver of European integration, but I have the sense the current economic challenges and the composition of the EU at 27 make the United Kingdom a more valuable partner for Germany.  Closer German-British cooperation in defense could facilitate German military forces becoming more deployable and help tide the British through significant cuts to their capabilities.  I see lots of possibility for mutually beneficial outcomes if the British and German governments strengthen their partnership.

Which policy change by NATO would have the most beneficial outcome?

Common funding for NATO operations.  Our current system gives countries disincentives to participate in the NATO Response Force and in NATO missions like Afghanistan.  I would love to see a pool of funds to support countries willing to deploy their forces.

Jorge Benitez is the Director of NATOSource and a Nonresident Senior Fellow at the Atlantic Council.