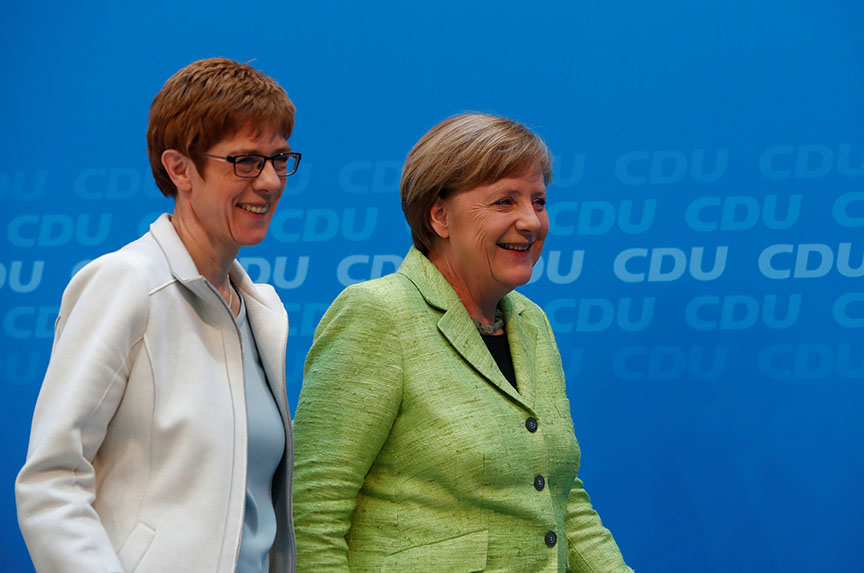 Under pressure to groom a successor, German Chancellor Angela Merkel has picked a “Mini Merkel” to take over as secretary general of her Christian Democrats (CDU).

Annegret Kramp-Karrenbauer, a close ally of Merkel’s, is expected to be voted into her new role at the CDU congress on February 26. She will replace Peter Tauber who is stepping down after an illness.

Merkel served as CDU secretary general before becoming chancellor. It is, however, too early to predict whether Kramp-Karrenbauer is on a similar trajectory.

Here’s what we do know about Kramp-Karrenbauer, besides the fact that when it comes to politics she and Merkel are like two peas in a pod. Hence the moniker, “Mini Merkel.”

1)    A stunning victory: Kramp-Karrenbauer stunned political commentators when she led the CDU to victory against the widely-favored Social Democrats (SPD) in Saarland, a small western state that borders France in March of 2017. The victory provided a much-needed shot in the arm to the CDU ahead of the national election in the fall.

3)    Coalition negotiations: Kramp-Karrenbauer was one of Merkel’s lead negotiators in talks to form a new ruling coalition in Germany. SPD members are voting on the deal that would join the CDU with the SPD. Merkel was reportedly impressed after Kramp-Karrenbauer continued working on the negotiations after being hospitalized following a car crash.

4)    Liberal and conservative positions: Kramp-Karrenbauer belongs to the Catholic social policy wing of the CDU. Her policies appeal to liberals as well as conservatives. While she supports workers’ rights and a higher minimum wage, she is supportive of family values and opposed to gay marriage.

5)    Mixed bag on refugees: While supportive of Merkel’s controversial decision to allow more than a million refugees into Germany, Kramp-Karrenbauer has insisted that these refugees accept German values.

6)    Standing up to Turkey: Kramp-Karrenbauer refused to allow Turkish politicians to enter her state to campaign for a referendum in Turkey that aimed to give more powers to Turkish President Recep Tayyip Erdoğan. [That referendum ultimately passed.] It is another matter that no Turkish official actually expressed an interest in campaigning in Saarland.