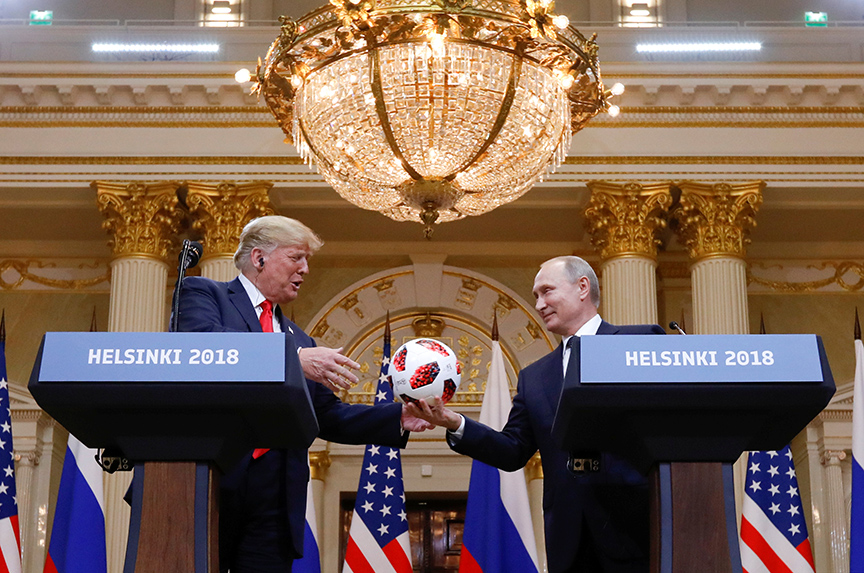 First, a caveat: the public knows little of what happened in the one-on-one meeting (happily, there was reportedly an American interpreter present) or the larger plenary meeting.

Second, some bad things that did not happen, at least not as far as we know: US President Donald J. Trump did not offer to recognize Crimea as part of Russia. He did not suspend American military exercises in Poland or the Baltic States. He did not promise to lift sanctions (which he couldn’t do anyway, because Congress passed legislation blocking just that). He did not appear to accept the Russian narrative of NATO as a destabilizing factor in Europe best abolished.

But what the world saw at the two presidents’ press conference in Helsinki was appalling. Russian President Vladimir Putin was in command. Trump was not. Putin had an agenda and a plan. Trump, it appeared by his comments, had none. Going into the meeting with Putin, Trump blamed his own country for harming US-Russia relations, which put him on the defensive at the outset. At the press conference, Trump could not bring himself to note Russian responsibility for invading its neighbor and seizing its territory, for illegal hacking and other forms of interference in the US elections, for doing the same to US friends and allies in Europe, for attempted murder using nerve gas in the United Kingdom, and for a host of other bad actions.

Trump was not wrong to seek a meeting with Putin. There is nothing wrong with seeking to improve relations with Russia. Trump was right to suggest potential areas where the two governments might seek progress, such as nuclear nonproliferation and arms control, counterterrorism, and Iranian bad behavior in the Middle East. But Trump appeared to believe that the United States must pay to obtain Russian cooperation even in these areas of presumed shared interests, in the form of tacit acquiescence to Russian aggression against the United States’ friends and the United States itself. A wise policy toward Russia would allow us to work together where possible, while pushing back against Russian aggression where we need to.  And we need to.

The past five weeks have witnessed the US president going after the institutions of the free world, the world the United States built after 1945 and the world upon which American power rests.

Perhaps Trump was tougher in the private meetings than in his press conference. It may be that the sound elements of the Trump administration’s policy toward Russia—continued and strengthened sanctions; increased military commitment to NATO’s eastern tier of countries, from the Baltics through Poland to Romania; continued support for Ukraine—will go on, independent of the president’s odd solicitude to Vladimir Putin.

But Americans, and the United States’ allies, should be able to do more than hope that their president in private was better than what they heard from their president on June 16 in Helsinki.

Daniel Fried is a distinguished senior fellow in the Atlantic Council’s Future Europe Initiative and Eurasia Center. In the course of his forty-year Foreign Service career, Fried played a key role in designing and implementing American policy in Europe after the fall of the Soviet Union.

Image: US President Donald J. Trump receives a soccer ball from Russian President Vladimir Putin during their joint news conference after a meeting in Helsinki, Finland, on July 16. (Reuters/Kevin Lamarque)