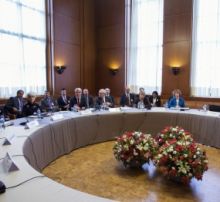 While extremists in Congress were hijacking the government during the shutdown, State Department diplomats were pursuing much more productive work a world away in Geneva. With surprisingly little fanfare, American and Iranian negotiators launched long-awaited talks over Iran’s increasingly advanced nuclear program. They described their first meeting as “substantive and forward-looking.” In diplo-speak, that means they had a surprisingly good start.

President Obama and Secretary of State John Kerry rightly view Iran’s nuclear challenge as America’s top international priority for the year ahead. If they can reach an agreement leaving Iran well short of a nuclear weapon, it will be a major achievement. To succeed, they will need to keep two opposing strategies in balance.

First, there will be no agreement unless both sides compromise. The United States and Iran are too proud and powerful to surrender to each other’s dictates. This must be a real negotiation with Iran agreeing to severe limits and intrusive inspections on its nuclear activities. The United States, in turn, may need to permit a limited, albeit highly supervised, Iranian enrichment program in the future.

But, second, the only way that kind of deal can be realized is if the United States maintains significant pressure on Iran. Nice words from Iranian President Hassan Rouhani will not sway Washington. Charm alone, however welcome, rarely swings the balance in high-stakes diplomacy. But power and leverage do. The United States and the European Union should not lift major sanctions until Tehran has agreed to a future without nuclear weapons. In fact, as the administration has been saying, no deal is preferable to a bad deal that is too lenient on Iran.

The only reason Iran is at the negotiating table, after all, is the devastating impact that sanctions have had on its economy and currency. As a result, Iran is weakened, isolated, and on the defensive — further evidence that US leverage has worked.

Maintaining this balance between diplomatic openness and flexibility on the one hand versus persistent application of sanctions on the other will be a challenge for the Obama team. And it will need help from Congress and Israel as the talks proceed.

Congress has been stalwart in passing, by overwhelming bipartisan majorities, Draconian sanctions against Iran. Israel has helped too. Prime Minister Benjamin Netanyahu has made the threat of force real to Iran through tough public statements. It is a diplomatic truth long recognized that negotiations often require the threat of military action to help them succeed. Congress and Israel have played that key bad-cop role on Iran.

But here is where timing, creativity, and finding the right balance is so critical. The United States has delivered some significant blows to the Iranian economy. It now needs to use that leverage to coax Iran to give up its dreams of nuclear weapons. That will require a degree of flexibility and compromise on our side to piece together a settlement that Iran, as well as the United States, can live with.

Obama may need to stay at the negotiating table for several months to reach an agreement. But Congress is now threatening to impose even more sanctions, and Israel is pouring cold water on the very idea of negotiations. Many in the administration believe new sanctions could torpedo the talks just as they begin. Congress should keep further sanctions on ice and defer to Obama on negotiations that are clearly the prerogative of the executive branch. And Israel should trust and support Obama’s diplomatic bid.

This promising American strategy has been a rare bipartisan joint venture, with Obama having a nearly identical game plan that President George W. Bush had toward Iran. If leaders in Congress can now support Obama’s careful balance of flexibility and toughness on Iran, we may be able to stop Iran’s nuclear future by diplomacy rather than force.

Wouldn’t it be extraordinary if Republicans as well as Democrats stood by the president as he executed this very challenging diplomatic endgame on the most critical war and peace issue of 2014? Or is that too much to expect in the hyper-partisan Washington that brought us the shutdown?

Nicholas Burns is a professor of the practice of diplomacy and international politics at Harvard’s Kennedy School of Government and a board director of the Atlantic Council.