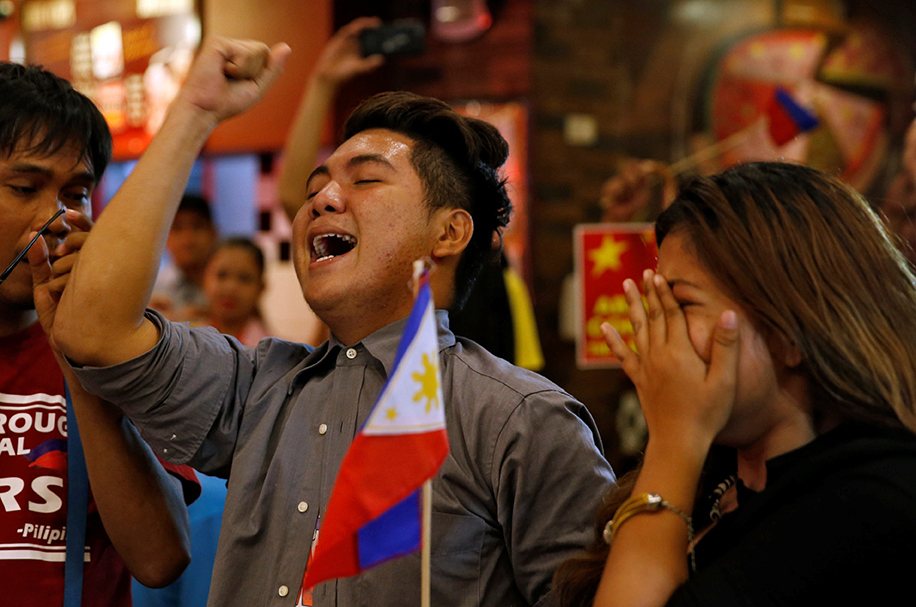 A ruling by an international tribunal in The Hague that China’s claims to “historic rights” in the South China Sea are unlawful delivers a setback to Beijing’s territorial ambitions. The question remains, however, whether this verdict will in any way alter China’s behavior.

“For sure, this is a major body slam for China,” said Jamie Metzl, a nonresident senior fellow in the Atlantic Council’s Brent Scowcroft Center on  International Security.

The Permanent Court of Arbitration ruled that there is no legal basis for China to claim historic rights to resources within the sea areas falling within the “nine-dash line”—this line, which stretches hundreds of miles south and east from China’s southern Hainan province, marks territory claimed by China. Brunei, Indonesia, Malaysia, Taiwan and Vietnam all claim areas of the South China Sea inside the nine-dash line.

The South China Sea includes vital trade routes and fishing waters as well as potential oil and mineral deposits. For China, “I don’t think it is about fishing rights or gas…there are a lot of major, major strategic issues,” said Metzl.

“For China, this is a setback. The question is, what are their long-term goals and can they achieve them,” he added.

“The real question is how they behave in the future,” said Cliff. “If they continue to act in violation…that will send a clear signal to the world of China’s commitment to the international norms and rules of the game. Alternatively, they could choose to say they don’t accept the rulings, but in practice abide by them. That would send a very different signal to the world.”

The Philippines filed its case in 2013 after China seized a reef, Scarborough Shoal, over which both countries claim sovereignty. China refused to participate in the arbitration and said it would ignore the tribunal’s findings and defend its interests.

Chinese President Xi Jinping said China’s “territorial sovereignty and marine rights” in the South China Sea would not be affected by the ruling “in any way.”

The tribunal’s ruling is the latest in a series of developments that have sucked the air out of Xi’s foreign policy, said Manning. The fact that a transition in administrations is due to take place in the United States in less than a year could create a dangerous situation because Xi is “like a wounded animal,” he added.

The tribunal ruled that China’s island-building activities were in violation of the UN Convention on the Law of the Sea, as was its denial of access for Filipino fishermen to traditional fishing grounds. The tribunal also said that Beijing had violated international law by causing “severe harm to the coral reef environment” and that no land formations in the South China Sea were large enough to warrant exclusive maritime zones beyond twelve miles.

Cliff described the ruling as stunning. “On virtually every point, the court ruled against China’s claims,” said Cliff. “They not only ruled against China’s claims, they also scolded China on a number of points, including that it had interfered with the efforts of the tribunal to rule on this issue by engaging in land reclamation and the construction of artificial islands while the case was being heard.”

The ruling is a “real turning point for China, potentially, and a test of its commitment to the rule of law in international relations,” said Cliff.

It took a “huge portion of the South China Sea off the table” in terms of China being able to claim it as its exclusive economic zone, he added.

US State Department spokesman, John Kirby, said the tribunal’s ruling “is an important contribution to the shared goal of a peaceful resolution to disputes in the South China Sea.”

“The United States strongly supports the rule of law. We support efforts to resolve territorial and maritime disputes in the South China Sea peacefully, including through arbitration,” he added.

The tribunal’s decision could also open the door to litigation from other countries that have their own territorial disputes with China in the South China Sea.

“This is all about big power politics,” said Metzl. “China has very consciously made a bet that they can turn up the temperature in the South and East China Seas and that the United States is not going to have the staying power to protect our allies.”

China’s actions in its maritime neighborhood have agitated countries in the region and pushed them toward a reinvigoration of relations with the United States, said Metzl. “It is not unrelated that the US military relationship with the Philippines is being resuscitated, with Singapore, with Australia.”

Metzl predicted that China will not take any major steps until at least after the G20 meeting in Hangzhou in September after which it would likely let the status quo take hold.

“We are entering a phase of great flux and a lot of uncertainty,” Metzl said.

“The goal of the United States and its allies will have to be to have carrots and sticks lined up,” he added.

Image: Activists celebrated a ruling on the disputed South China Sea by an arbitration court in The Hague in favor of Philippines in Manila on July 12. (Reuters/Erik De Castro)