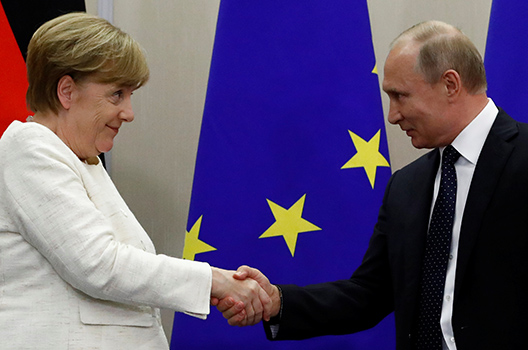 When German Chancellor Angela Merkel meets Russian President Vladimir Putin on August 18, few expect any break-throughs on the intractable differences between Berlin and Moscow in recent years. But their second meeting in just three months may also signal that the two leaders are stepping up their dialogue as both need each other’s support on a number of foreign policy headaches amid an international environment in flux.

Officially on the agenda for the meeting are the protracted conflict in eastern Ukraine, the Syrian war, and the refugee situation in the region as well as the controversial Nord Stream 2 gas pipeline between Russia and Germany. For the moment, Merkel seems to have little leverage to affect any major changes in Moscow’s policies. At least in the near term, Putin holds the key to real progress on any of the three items and little suggests his previous positions have shifted significantly since their last meeting in May—or are likely to do so in the immediate future.

In the conflict with Kyiv, Putin could restrain Russian proxies—and probably regular Russian troops—fighting in eastern Ukraine. But there are few signs that he is interested in taking steps any time soon towards a genuine ceasefire under the stalled Minsk agreement brokered by Berlin and Paris. So Merkel will likely limit herself to reminding Putin of his Minsk commitments and trying to defuse rising naval tensions between Ukraine and Russia in the Sea of Azov, experts suggest.

The conversation on Syria looks even less promising for Merkel. Here, Putin remains President Bashar al-Assad’s most powerful ally, with Russian military intervention having essentially brought the dictator back from the dead. As Assad’s forces push to regain even more control of the country, Merkel may hope to convince Putin to rein in the Syrian government in order to avoid large-scale atrocities and another mass exodus that could further destabilize the neighborhood and reach Europe.

The expectation that Merkel could, with Putin’s help, arrange a return of even a limited number of Syrian refugees, an issue haunting her since accepting one million refugees in 2015, seems untethered to reality. Many Syrian refugees fear retribution from Assad’s regime upon return, Germany’s asylum authorities and courts will hardly be able to deem Syria a safe country to return to any time soon, and much of the devastated war zone lacks the capacity to accommodate its former population.

Merkel may be most hopeful to get concessions from the Russian president on the issue of Nord Stream 2. After years of vocal opposition from EU allies and the remote specter of US sanctions over the project’s geopolitical implications, Merkel in recent months has hardened her position on the German-Russian Baltic Sea pipeline, demanding Moscow provide guarantees that Ukraine remains a commercially significant transit country for Russian gas to Europe and receives transit fees.

This demand and her acknowledgements that Nord Stream 2 is not simply a benign commercial project but has a geopolitical dimension are intended to provide political cover and leverage for European Union efforts to broker a new deal between Russian gas giant Gazprom and Ukraine’s Naftogaz for a post-2019 transit agreement when the current arrangement expires. Any progress toward a new transit deal will require pressure on Gazprom’s leadership from the highest political level that only Putin can decide to exercise. He may just be inclined to do so given the importance of Nord Stream 2 and energy exports more generally for the struggling Russian economy, as well as Gazprom’s need – at least for the near future – for the capacity and back-up option that Ukraine’s pipeline network can provide, even if it may be questionable how firm that commitment will be.

Despite the limited prospects for any real progress on these key issues, however, the upcoming meeting still suggests an intensifying dialogue. For the moment, Putin may hold most of the cards, but in the medium term knows he needs Germany’s support to find sustainable solutions on a number of challenges.

In Syria, Putin may soon have to think about an exit strategy. As Norbert Röttgen, Merkel’s party ally and chairman of the German Bundestag committee on foreign affairs, notes, Putin “likely doesn’t have an interest to permanently get embroiled… in an unwinnable, endless, ugly war in Syria.” Russia will need international support for reconstruction and the return of displaced populations, and it has begun outreach efforts to Europeans. In July, Merkel and German foreign minister Heiko Maas met with Russian foreign minister Sergey Lavrov and the head of Russia’s general staff to discuss Syria. European opposition to normalizing relations with the Assad regime remains strong. But if Moscow is to stand any chance of extricating itself from Syria, it will need Germany, given its deep pockets, its influence in EU decisions, and a self-interest in supporting greater stability in the region.

For Merkel, migration is at the top of both her foreign and domestic agenda and the political fall-out of the 2015 refugee crisis continues to limit her room for maneuver. Besides domestic policy changes, reforms of the EU’s asylum policies, and more redistribution of refugees across the union, greater stability in Syria would be a major step forward in her efforts to alleviate migratory pressures.

Similarly, Merkel remains Putin’s main international interlocutor in the Ukraine conflict. Chances of the EU easing its sanctions against Russia over its annexation of the Crimean Peninsula seem near non-existent in the short term, barring significant changes in Russia’s behavior in Ukraine. But Putin knows that if he is to keep the prospect alive at all, the road to a decision in Brussels leads through Berlin. As the US administration and Congress are stepping up their sanctions of Russia, there seems to be little appetite in Germany to follow suit, even as nearly two thirds of Germans continue to support the current EU sanctions. Russia may want to engage to keep the current status quo.

Moscow’s vocal reaction to the new US sanctions may also signal Putin’s willingness to pursue a renewed dialogue with Germany. The new measures may be hitting the Russian economy harder than expected and have impacted Russian company shares as well as the sliding ruble. Combined with painful domestic pension reforms, Russian fatigue over costly foreign policy adventures, and the country’s dependency on energy exports, a worsening economic outlook may pose new challenges to Putin’s domestic power base.

The Putin-Merkel meeting must also be seen “in a wider, global context”, as Stefan Meister of the German Council on Foreign Relations argues. US President Trump’s actions on trade, his withdrawal from the Iran nuclear deal, and his attack on Nord Stream 2 during the recent NATO summit have contributed to even greater uncertainty for both Germany and Russia. The current US tensions with Turkey—a country whose stability could directly impact Merkel’s migration concerns—add to that complexity. Moscow has already hinted that some of these issues may also feature in the upcoming Merkel-Putin talks.

A normalization of German-Russian relations still remains highly unlikely, given the very real disagreements between both sides, Putin’s unwillingness to shift positions, and Germany’s firm EU and NATO integration. But as Merkel and Putin meet, they may just begin to open the door to greater cooperation on a number of specific concerns.