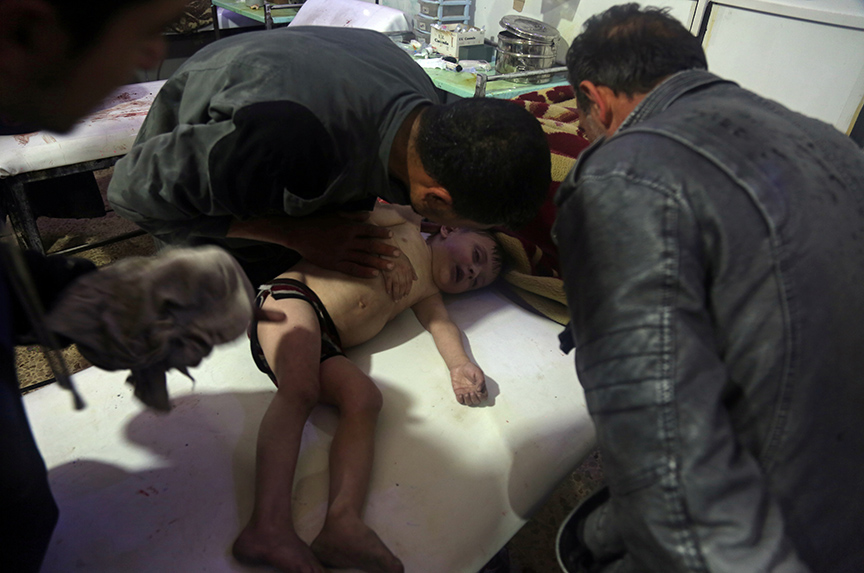 US President Donald J. Trump said on April 9 that he will respond within forty-eight hours to an alleged chemical weapons attack on a Damascus suburb. Syrian President Bashar al-Assad’s regime has denied responsibility for the attack.

Assad was supposed to have given up his chemical weapons under a deal reached in 2013.

Here is a timeline of events that led up to that agreement and a look at how it has been consistently violated ever since.

March 15: Inspired by the Arab Spring uprisings in the region, a peaceful pro-democracy protest erupts in the southern Syrian city of Deraa. Bashar al-Assad’s regime responds with deadly force. A full-scale war ensues.

July 23: Syrian Foreign Ministry spokesman Jihad Makdissi confirms for the first time that the Assad regime has chemical weapons. “Any stock of W.M.D. or unconventional weapons that the Syrian Army possesses will never, never be used against the Syrian people or civilians during this crisis, under any circumstances,” Makdissi said, adding that they will be used “strictly and only in the event of external aggression” against Syria.

August 20: US President Barack Obama issues his red-line warning to Syria saying any attempt by the Assad regime to move or use chemical weapons would change his administration’s “calculus.”

“We have been very clear to the Assad regime, but also to other players on the ground, that a red line for us is we start seeing a whole bunch of chemical weapons moving around or being utilized. That would change my calculus,” Obama said. “That would change my equation. . . . We’re monitoring that situation very carefully. We have put together a range of contingency plans.”

December 23: A chemical weapons attack is alleged in the city of Homs.

January 15: A secret State Department cable from the US consul general in Istanbul, Scott Frederic Kilner, to the State Department in Washington says that an investigation by the consulate turned up evidence that the Syrian military had used a chemical weapon known as Agent 15 in Homs on December 23, 2012.

“We can’t definitely say 100 percent, but Syrian contacts made a compelling case that Agent 15 was used in Homs on Dec. 23,” an Obama administration official told Foreign Policy.

The Obama administration was skeptical. “We don’t have any evidence to substantiate the regime’s charge that the opposition even has [chemical weapons] capability,” said State Department spokesperson Victoria Nuland.

The Syrian government seeks an investigation by the United Nations into the attack on Aleppo.

March 20: Obama, speaking in Jerusalem, says “the use of chemical weapons is a game changer” in Syria.

March 21: Acting on a request from the Assad regime, UN Secretary-General Ban Ki-Moon says the United Nations will investigate the possible use of chemical weapons in Syria.

April 9: The Syrian government refuses to permit the United Nations to expand the scope of its investigation. The UN’s Ban urges the Assad regime to cooperate in chemical weapons probe.

April 25: The US intelligence community sends a letter to congressional leaders informing them that it had assessed “with varying degrees of confidence” that the Syrian regime had used sarin nerve agent.

April 26: Obama says he will respond “prudently” to evidence that Syria has used chemical weapons.

A UN panel reports, meanwhile, says there are “reasonable grounds” to believe that chemical weapons have been used in Syria.

June 13: US Deputy National Security Advisor Benjamin Rhodes says: “Following a deliberative review, our intelligence community assesses that the Assad regime has used chemical weapons, including the nerve agent sarin, on a small scale against the opposition multiple times in the last year.  Our intelligence community has high confidence in that assessment given multiple, independent streams of information.”

August 21: Syrian opposition activists claim a chemical weapons attack has occurred in the rebel-held Damascus suburb of Ghouta. Thousands of victims are reported.

August 25: The Assad regime says it will allow UN inspectors to visit Ghouta.

August 26: Assad denies responsibility for the attack in Ghouta.

August 28: Obama says in an interview with PBS NewsHour that his administration has concluded that the Assad regime had carried out attacks using chemical weapons and that there need to be “international consequences.”

“I have no interest in any open-ended conflict in Syria, but we do have to make sure that when countries break international norms on weapons like chemical weapons that could threaten us, that they are held accountable,” he says.

August 31: Obama says he will seek an authorization for the use of force from Congress for a limited military strike in Syria.

September 9: US Secretary of State John Kerry says that the Assad regime could avert a military strike if it turns over its chemical weapons “without delay.”

In an address to the nation, Obama says: “No one disputes that chemical weapons were used in Syria.”

“Moreover, we know the Assad regime was responsible.  In the days leading up to August 21st, we know that Assad’s chemical weapons personnel prepared for an attack near an area where they mix sarin gas,” he says.

But Obama asks Congress to “postpone a vote to authorize the use of force while we pursue this diplomatic path” with Syria. He also says that he has instructed the military to “be in a position to respond if diplomacy fails.”

September 12: Assad informs the UN’s Ban in a letter that Syria will join the 1997 Chemical Weapons Convention, which prohibits the production, storage, and use of chemical weapons.

Kerry and Lavrov discuss the Russian proposal in Geneva.

September 27: The OPCW adopts a timeline for destroying Syria’s chemical weapons after the Assad regime declares its stockpiles.

October 1: A team of OPCW and UN officials arrives in Syria to monitor and verify the destruction by the Syrians of their chemical weapons stockpiles and facilities.

October 31: The OPCW-UN mission confirms that Syria has destroyed critical equipment at all of its declared chemical weapons facilities. “By doing so, Syria has met the deadline set by the OPCW Executive Council to ‘complete as soon as possible and in any case not later than 1 November 2013, the destruction of chemical weapons production and mixing/filling equipment,’” it says.

January 7: The first consignment of Syrian chemical weapons is shipped out of the country.

March 6: The UN Security Council adopts a resolution condemning in the strongest terms the use of chlorine as a weapon in Syria.

August 7: The UN Security Council authorizes the OPCW and UN investigators to probe reports of the use of chemical weapons in Syria.

August 10: A chlorine gas attack is reported in Aleppo.

October 21: The OPCW-UN joint mission finds that the Syrian regime was responsible for three chlorine attacks—in Talmenes on April 21, 2014 and Sarmin and Qmenas on March 16, 2015 in Idlib province. The report also says that Islamic State militants had used sulfur mustard gas.

January 5: In his January 5, 2017, exit memo Kerry writes: “Removing these [chemical] weapons from Syria ensured that they could not be used—by the Asad regime or by terrorist groups like ISIL—but unfortunately other undeclared chemical weapons continue to be used ruthlessly on the Syrian people.”

February 28: Russia and China veto a UN Security Council resolution that authorizes sanctions on Syria for the regime’s use of chemical weapons.

April 4: Dozens of people are killed in a chemical weapons attack on Khan Sheikhoun, a town in the western Idlib province. The Assad regime denies responsibility.

April 6: US President Donald J. Trump says of the attack in Khan Sheikhoun: “I will tell you that attack on children yesterday had a big impact on me—big impact.” As a result, Trump said his “attitude toward Syria and Assad has changed very much.”

April 7: Trump orders a missile strike on Syria in response to the chemical weapons attack in Khan Sheikhoun. “It is in this vital national security of the United States to prevent and deter the spread and use of deadly chemical weapons,” he says.

June 26: The White House says Assad appears to be preparing for another chemical weapons attack and warns the Syrian regime will “pay a heavy price” in the event of another incident.

Nikki Haley, the US ambassador to the United Nations, said in a tweet: “Any further attacks done to the people of Syria will be blamed on Assad, but also on Russia & Iran who support him killing his own people.”

June 30: The OPCW-UN fact-finding mission confirms the use of sarin in a chemical weapons attack in Khan Sheikhoun on April 4, 2017. “A rigorous methodology was employed for conducting an investigation of alleged use of chemical weapons that took into account corroboration between interviewee testimonies; open-source research, documents, and other records; and the characteristics of the samples including those provided by the Government of the Syrian Arab Republic,” it says.

February 1: A chlorine gas attack is reported in Douma, a rebel-held suburb of the Syrian capital Damascus. This was the third such attack on the region in a span of three weeks.

April 7: Assad’s military reportedly used chemical weapons in an attack in Douma. More than three dozen people are believed to have died in the attack.

April 8: Trump tweets Assad’s regime will pay a “big price” for the attack in Douma. “President Putin, Russia and Iran are responsible for backing Animal Assad,” he says in a second tweet.

April 9: Unidentified jets are reported flying over Lebanon and the Syrian news agency says that a missile attack on an air base in central Syria has been thwarted. The Pentagon denies US jets were involved.

Trump says he will decide on how to respond to the attack in Douma within forty-eight hours.

Image: A child is treated in a hospital in Douma, eastern Ghouta in Syria, after what a Syria medical relief group claims was a suspected chemical attack on April 7. (White Helmets/Handout via Reuters)