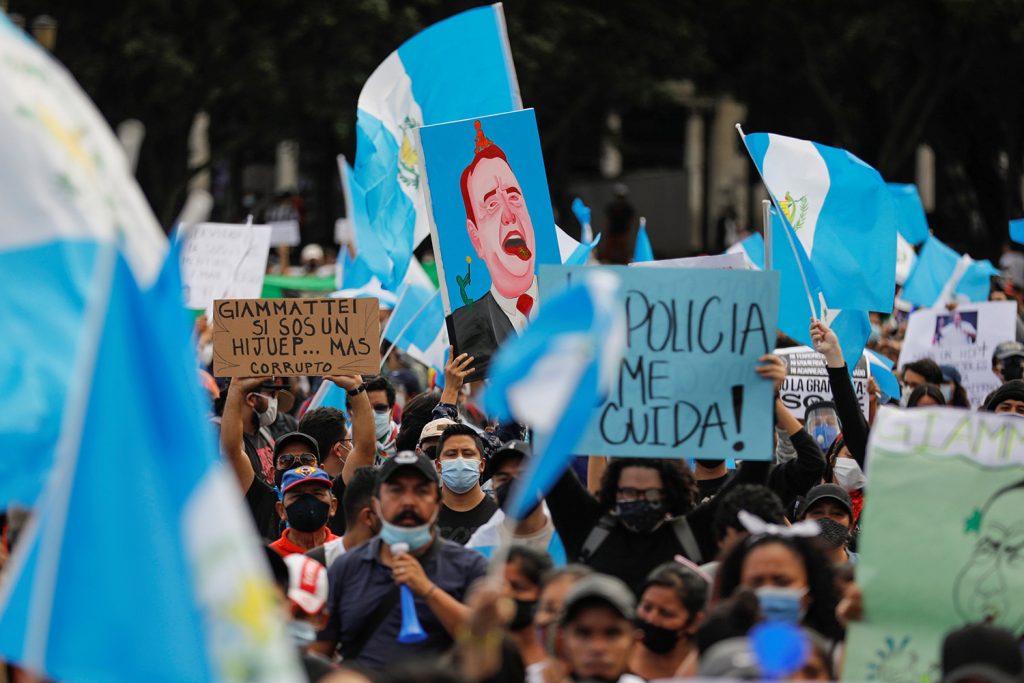 The Guatemalan Congress went up in smoke, literally, on November 21, when massive protests broke out against a draft budget that was negotiated behind closed doors, with limited input from civil society, and that proposed cuts in funding for COVID-19 and human rights agencies as the country battles the virus, unemployment, and corruption. While Congress has halted the ratification of the budget, protests in the Central American country have only escalated. The last days of November were marked by continued calls for President Alejandro Giammattei to resign. How did we get here?

Firstly, the coronavirus pandemic continues to affect the country, despite early and strict national lockdowns. By mid-June 2020, just a few months into the pandemic, the number of people facing hunger in Guatemala had doubled. As of this month, over 120,000 cases have been confirmed, the highest of the three northern Central American countries. The high degree of informality and the structure of the workforce in Central America renders telework unfeasible in many cases, forcing citizens to choose between their livelihoods and the risk of contagion. In fact, over 70 percent of the workforce in Guatemala is informal, and many depend on the holiday season for the bulk of their yearly income.

Second, in the midst of the pandemic, three quarters of the Guatemalan Congress approved a now-scrapped 2021 budget that sought to cut health and education spending while increasing the meal stipends for congressional representatives and prioritizing mega infrastructure plans that involve the Ministry for Communications, Infrastructure, and Housing (Comunicaciones, Infraestructura y Vivienda), long-known for a string of high-profile corruption cases. In reaction to this, citizens took to the streets to denounce the budget and the systemic corruption that continues to weaken the rule of law, security, and social programs. The budget approval also came as most of the country was focused on the damage from hurricanes Eta and Iota, historically two of the strongest storms to hit Central America.

A recent International Monetary Fund visit to Guatemala concluded that although the country’s contraction of about 2 to 3 percent in 2020 is lower than the regional and global averages, there will be lasting economic and social ramifications of the pandemic. Already, the Economic Commission for Latin America and Caribbean finds that foreign direct investment (FDI) to Latin America contracted by half in 2020 as a consequence of the pandemic. The drying up of FDI will do little to improve the increasing levels of unemployment in Guatemala, and will likely force citizens to leave their country. Increased migration—from Guatemala but also from other Central American countries and Mexico—will be a challenge for the incoming Biden-Harris administration and the international community. Migration to the United States is already picking up when compared to pre-pandemic levels, and the aftermath of the storms will continue to push more people north. Already, the Guatemalan government has put in an official request for temporary protected status (TPS) for Guatemalan citizens in the United States, as the destruction of the storms has ravaged entire villages.

As the Guatemalan Congress prepares to receive and review a new budget proposal for 2021, with inputs from numerous civil-sector representatives, the government will have to work across industries, parties, and sectors to unite a divided and discontent country. At the same time, the Biden-Harris administration will have to play an important role in supporting citizens’ demands to fight corruption, create job opportunities, and continue to strengthen the US-Guatemala relationship. A prosperous Guatemala, committed to the fight against corruption, has important ramifications for the entire hemisphere.

¡Basta Ya! How pandemic-related corruption calls for a new social contract in Panama

In order for Panama to emerge from the pandemic with inclusive and sustainable growth, the country needs a new social contract that combats corruption and provides equal opportunities for everyone.

Bolivia emerges from its electoral turbulence

As Arce prepares to begin his term on November 8, he must consider Bolivia’s priorities and relationships in the region in order to secure prosperity for the nation and a continued commitment to upholding democracy.