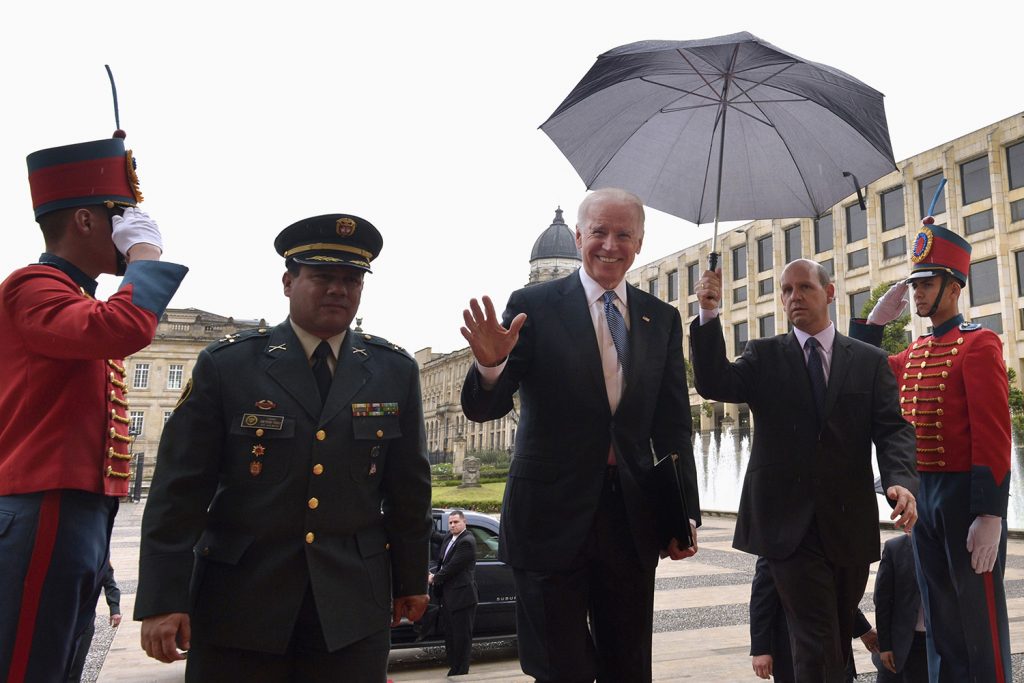 As President-elect Joe Biden prepares to enter the White House, many Colombians hope to see an era of renewed US global leadership and an embrace of multilateralism to address common challenges. Biden’s shift in rhetoric and approach could represent a big opportunity for US-Colombia relations going forward.

With a proven track record of working with Colombian leaders toward peace and prosperity, he is well positioned to deliver on this promise. As a US senator, Biden was the point person on Plan Colombia, helping hash out the details of the initiative and securing critical bilateral support. While vice president, he helped craft President Barack Obama’s Peace Colombia, which widened the partnership to include sustainable development, trade and investment, hemispheric security, human rights, and other areas of cooperation.

With a Biden presidency, Colombia and the United States have a unique opportunity to deepen bilateral relations along the three strategic pillars outlined below and identified by the Atlantic Council’s US-Colombia Task Force, co-chaired by US Senators Roy Blunt (R-MO) and Ben Cardin (D-MD).

Colombia and the United States will benefit from a partnership that promotes inclusive and sustainable economic development in both countries. Deepening bilateral investment and trade is critical to achieving such development.

Opportunities for increased US investment in Colombia are numerous over the next four years, especially in the areas of innovation, technology, and tourism. “A Biden administration could promote investments in clean and renewable energy, as well as in technology-intensive manufacturing sectors and tourism,” Task Force member Maria Claudia Lacouture, who currently serves as executive director of the Colombo-American Chamber of Commerce and is a former minister of trade, industry, and tourism of Colombia, told us. She also noted that, “the United States is the main foreign investor in the country, benefiting more than fifteen economic sectors and 100,000 workers.”

The US-Colombia Trade Promotion Agreement (TPA), also provides enormous opportunities for mutually beneficial trade. The United States has remained Colombia’s main commercial partner since the agreement entered into force in 2012, with total bilateral trade amounting to almost $25 billion. The new Biden administration should focus on working with Colombia to fully implement the TPA. This will not only result in increased trade, jobs, and overall economic growth, but also in improved protections for workers, intellectual property, and the environment.

Moreover, the Biden administration could continue to work with Colombia to incentivize formalization and strengthen the country’s tax system. Currently, 75 percent of companies and 45 percent of workers operate in the informal economy and tax evasion is close to 5 percent of gross domestic product (GDP). Although tax reform is strictly a national matter, “the United States could advise on how to modernize and strengthen the governability of Colombia’s tax agency, DIAN,” said Luis Fernando Mejia, Task Force member and executive director of Fedesarrollo. “The IRS could cooperate in issues related to best practices, technology, training of human capital, digitalization, among others.”

US and Colombian economic and security interests in the region are dependent on the promotion of peace and development in the high coca-producing areas of Colombia, where illegal armed groups thrive and populations face violence and poverty.

As the Atlantic Council’s US-Colombia Task Force outlines in its 2019 report, lasting peace and prosperity requires a holistic, long-term strategy, that goes beyond security and counternarcotics, and includes justice, education, quality governance, and economic opportunities in rural Colombia.

While US President Donald Trump made coca reduction and aerial spraying a top priority, President-elect Biden might adopt a multidimensional approach to the global drug problem. Strategies under such approach could include, “localized-aerial coca spraying, regional coordination mechanisms for interdiction, construction of tertiary roads, purchases of crops that substitute coca cultivation, and long-term contracts for farmers,” according to Juan Carlos Pinzón, Task Force member, former minister of defense of Colombia, and former ambassador of Colombia to the United States. “International cooperation, especially from the United States, is fundamental to make meaningful advances in these areas,” he explained to us.

Maria Victoria Llorente, Task Force member and executive director of Fundación Ideas para la Paz, reinforced the need for a holistic approach. “The bilateral agenda needs to transcend the drug problem, and include environmental and economic issues,” especially in rural areas. A “multidimensional approach that includes a gradual path to formality and legality for coca growers,” she added, “and a more horizontal partnership between the United States and Colombia,” is critical to solving the world drug problem.

Colombia also plays a key role in responding to the political, economic, and humanitarian crisis in Venezuela. Colombia has displayed immense leadership in the international arena, engaging with the Lima Group to work for a peaceful democratic transition in Venezuela. It has also welcomed in almost 2 million Venezuelan migrants and refugees since 2014, becoming the primary destination for Venezuelans. President Iván Duque has adopted a policy of complete solidarity toward Venezuelans, making a commendable effort to regularize their legal status, grant them work permits, and provide them with medical care, housing, public education, and other services.

With the economic recession unleashed by the COVID-19 pandemic, this level of attention on migrants and refugees may prove hard to sustain in the coming months and years. And, although critical, current international aid to Colombia has proved largely insufficient to address the migrant and refugee crisis—a problem that will only continue to grow.

President-elect Biden will be able to count on deep bipartisan support in the United States for addressing the Venezuela crisis. Biden can fulfill his promise of deepening US-Colombia ties by increasing financial, technical, and diplomatic support to Colombia, and encouraging the international community to do the same.

The math is simple. A peaceful and prosperous Colombia will safeguard US national security, economic, and geopolitical interests in Latin America. President-elect Biden understands this and has pledged to strengthen the US-Colombia partnership. To succeed, the partnership must be further expanded to address economic development, peace and security, and the lingering crisis on Colombia’s borders.

Daniel Payares-Montoya is an intern at the Atlantic Council’s Adrienne Arsht Latin American Center, and a research fellow at the University of California’s Center for Latin American Studies at Berkeley.

Complex identities: Kamala Harris and US foreign policy towards the Caribbean

An exploration of the necessary conditions for successful shale development in Colombia.