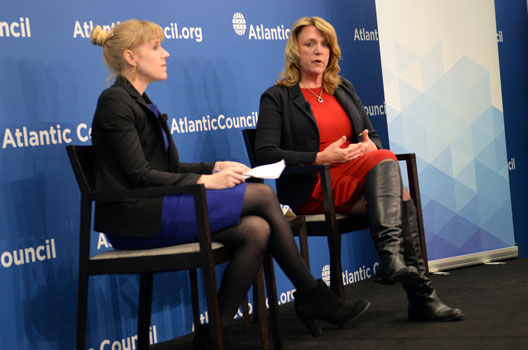 In light of numerous instances of Russian aggression around the world, the transatlantic security community must stand together in a coordinated show of force so as to deter Russian revanchism, Deborah Lee James, secretary of the US Air Force, said at the Atlantic Council on December 19.

“The transatlantic security community… is facing greater challenges today than at any time since the end of the Cold War,” said James. She said that Russia’s infringements upon the security of other nations are “poking and testing and pushing and seeing what the response will be.”

From Russia’s annexation of Crimea, to buzzing NATO airspace in the Baltics, to indiscriminate bombing in Syria which has contributed to the refugee crisis, the Kremlin’s activity has threatened Europe on multiple fronts.

Where Southern Europe is predominantly concerned with the flow of refugees from the Middle East, Northern and Eastern Europe have concentrated their defenses against Moscow. However, arccording to James, “rather than being a tale of two Europes… this is a case of the entire region being united in a single defensive alliance.”

She called for security cooperation and coordinated efforts among all NATO member states. Here, James said, is where the US Air Force can play a role, particularly with regard to training, presence, and equipment. “We operate best when we train and collaborate with our allies and partners,” she said.

The future of the transatlantic alliance, particularly US commitment to NATO, has been called into question since the election of Donald Trump as the next president of the United States. Trump has made comments emphasizing that all NATO member states must contribute 2 percent of their gross domestic product to collective defense, creating uncertainty about US support for those who cannot afford to do so. Currently just five of the Alliance’s twenty-eight member states meet the 2 percent goal.

According to James, NATO and Europe remain “bedrocks” of the transatlantic alliance. “There could be changes on the margin,” she said, “but I believe that there will not be a fundamental shift.” However, she did emphasize the importance of “everyone doing their part.”

“We all share in this and its tough politics for everybody but everybody has to do their part,” she said. “It’s my hope… that the allies who aren’t at 2 percent can get themselves on a trajectory to reach that point.”

According to James, the Air Force retains a strong relationship with NATO members. “Our allies and partners want more US Air Force,” she said. James also described the Baltic Air Policing Mission, designed to protect the airspace around the Baltic region from Russian aircraft.

Additionally, James spoke about an upcoming permanent Allied presence in the Baltics. While the United States will have command in Poland, she said, NATO allies will coordinate ground and air policing in the Baltics, with charge of the commission changing on a rotational basis. Germany currently holds that commission.

When asked if placing forces in the Baltics might risk escalating tensions with Russia, James responded: “The greater risk is if we did not have a greater presence at this point in time.” She claimed that “by invading, occupying, and attempting to annex Crimea, Russia is demonstrating that it is trying to overrun the norms that have kept the peace for decades.”

“Fortunately the transatlantic community is coming together in response to these actions,” she added.

“Our forces are there as part of a package to deter aggression,” said James. “Not only are we front and center,” she added, “but we’re front and center on day one.” She emphasized the efforts of the Air Force to increase training, acquire more resources, and focus on interoperability.

However, James called for an improvement of infrastructure and capabilities to enhance responsiveness.  “We are the most technically advanced but what we have seen over the past twenty-five years is that other countries have been watching us… many are catching up in ways that are worrisome to the United State.”  James described how “we are making strides to bring our mechanisms for cooperation well into the twenty-first century.” For example, the Air Force has established cooperative cyber defense in Estonia, said James. In total, there are twenty-four centers of excellence across Europe which “benefit the entirety of the alliance” because of the shared knowledge and pooling of resources.

“We want to make sure that we are investing and moving in the right direction so we can remain the best,” according to James.

She said that a worthy recipient of investment is the F-35 fighter jet; a new aircraft defined by its enhanced capabilities and interoperability suited for a modern security environment. While Trump has questioned the price of the F-35, “the case [for purchasing it] is the threats,” said James. She described how the F-35 allows for greater potential to combat high-end threats, particularly anti-access/area denial environments, such as those imposed by Russia.

According to James, “many of our partners have already begun to express the ways that they expect the F-35 to transform the battlefield.” She added, “we fully support NATO and our allies acquiring these force-multiplying capabilities.”

Air Force capability is determined by the technology and resources at its disposal, but also the size of the fighting force. “The US military is the best military in the world… but we have reduced the size of our Air Force over time so capacity is now an issue,” she said. James emphasized the need to increase the number of active duty airmen while conceding that “the budgetary constraints are real.”

Image: Missy Ryan (left), a Pentagon correspondent with the Washington Post, moderated a discussion with The Hon. Deborah Lee James, secretary of the US Air Force.