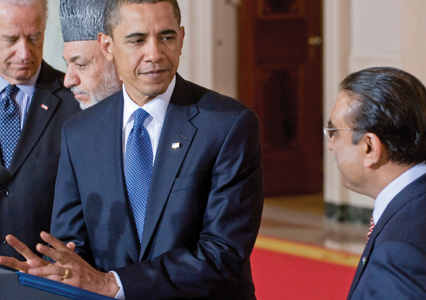 The tattered relationship between the United States and Pakistan has been patched up yet again—with the political equivalent of duct tape. A low-level Memorandum of Understanding has been signed by bureaucrats, not political leaders, to provide a diplomatic fig leaf. But basic flaws continue to haunt the relationship that has degenerated, again, to a transactional one. For a while, it appeared that the United States and Pakistan had agreed on some common goals for Afghanistan and the region and disagreed only on how to get there. Now, all bets are off.

One strong reason for the failure to reconnect is the lack of a center of gravity in both countries in terms of ownership of the relationship at the highest levels. At one time, Vice President Joseph Biden and then Secretary of State Hillary Clinton appeared to be invested in the relationship in the United States. Special Envoy Richard Holbrooke took it upon himself to knock down some stovepipes and get things moving. Now, policy is being managed, not made, but in bits and pieces and a major part of the new policy seems to reside in Langley—where the drone, an instrument of war, has become a virtual strategy and a policy. There are no indications that the Central Intelligence Agency or for that matter the U.S. government would allow Pakistan the access to drones or control over them that it seeks. If the new director-general of Pakistan’s Inter Services Intelligence managed to claw back some control from his U.S. counterpart or get a written agreement during his recent visit to Washington, D.C., then he can claim a major victory. But chances are slim that this happened during this meet-and-greet encounter.

In Pakistan, the civil and military divide remains a huge chasm. The military has allowed the government to drift at times instead of nudging it into action. In the absence of a national security council, it may be necessary to bring together an ad hoc group of the civil and the military to discuss and agree on key issues of national importance so nothing is left to chance and domestic decisions are not postponed. Involving business leaders may be a critical element in this process. But domestic legal and political squabbles have become a major distraction, with the rampant judiciary playing a major role in creating a climate of uncertainty.

A major reason for the U.S. distraction is that election season is upon us in the United States and neither President Barack Obama nor his Republican challenger Mitt Romney has deemed Afghanistan or Pakistan worthy of public discussion on the campaign trail. If Obama were to find a magic lamp tomorrow with one guaranteed wish, my guess is he would ask for an exit from Afghanistan yesterday! Afghanistan fatigue has set in with the American people, Congress, and the administration. Pakistan fatigue may not be far behind. It will require a determined effort by the American team in Islamabad to make its case in both capitals in the months ahead and to convince the average Pakistani that the U.S. is not ready to fold its tent and fade into the night once more.

What will change this depressing scenario inside Pakistan? Pakistan needs to show a determination to craft and implement sound economic policies at home, adopt a proactive approach to helping stabilize Afghanistan, and mend relations with its neighbors so it does not need to rely on military or economic aid from afar. Improved domestic governance and restoration of economic growth and stability are paramount. But Pakistan too is gripped by pre-election fever. Denial is not the right approach. Half measures will not work. Government needs to think boldly and play the long game. This means taking charge of security and economic policy, and working with the best and the brightest inside Pakistan to ensure that Pakistan is prepared to deal with its looming demographic challenges. Most of the population is very young and Pakistan needs to educate and create jobs for millions of youth entering the workforce in the next decade or two. Once Pakistan begins to take itself seriously, its friends in the United States and elsewhere will find it easier to come to its aid.

Otherwise, the risk is that economic woes at home will lead to the shutting off of the aid spigot from the United States and Europe. And the economic pie inside Pakistan would then begin to shrink further and at a faster pace. The consequences of that will be instability and unrest. Pakistan’s South Asian neighbors seem to be accelerating away from Pakistan in terms of growth and open societies, despite the many short-term growing pains they face. Pakistan can catch up with them if it starts now. Leaving things for another year or two may be too late.

Shuja Nawaz is the director of the South Asia Center at the Atlantic Council. This piece originally appeared in Newsweek Pakistan. Photo Credit: Saul Loeb / AFP