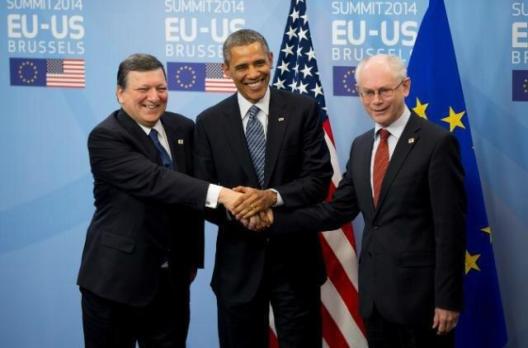 The crisis over Russia’s invasion of Ukraine dominated this week’s EU-US Summit in Brussels, followed by the topics that had been intended as top priorities for the meeting: negotiations for a broad transatlantic trade partnership and Europe’s anger at how pervasively it has been spied upon by the US National Security Agency. Missing from the agenda was a separate problem that needs high-level transatlantic attention, write the Atlantic Council’s Danya Greenfield and Amy Hawthorne. That is the worrisome situation in the Arab countries that have been struggling since 2011 to make the difficult traverse from authoritarian rule to democratic and (thus) more stable governance. While these countries – Egypt, Libya, Tunisia and Yemen – may not seem to present an immediate crisis, their failure would damage European and US interests.
The instabilities of these Arab lands – including illegal migration, the trafficking of people, weapons, or extremist political violence – are immediate dangers to Europe. Across the Atlantic, the United States may feel it has greater safety from further civil explosions in a Libya or an Egypt. But the networks and targets of jihadism remain transnational, and critical US interests in the Middle East, if absent from today’s headlines, are no less real.

It is a difficult moment for the United States and Europe to rededicate themselves to supporting the democratic transitions of Arab states, Greenfield and Hawthorne write. A week of conversations with European officials in Brussels, Rome, Paris and London, made it “abundantly clear to us that European policymakers are just as distressed and feel just as resigned to the troubled fate of the countries as their US counterparts.” European and US observers agree that Tunisia is moving on the right track, but its gains are still tenuous. Libya is a security nightmare, lacking institutions, interlocutors, and indigenous plans even to halt its deterioration. Egypt is in a dangerous authoritarian retrenchment. In Yemen, persistent violence threatens even the modest gains from its recent National Dialogue.

“In the immediate wake of the Arab uprisings, the United States and Europe expressed a newfound acknowledgement that security and democratic development are indeed inextricably linked, yet the difficulty of democratization in the region in the past three years has led many to question this conclusion now,” Greenfield and Hawthorne write. “This would be a mistake. We should not need to learn the lesson twice in fewer than five years that governments that fail to respond to the needs of their citizens or develop inclusive institutions become breeding grounds for instability and discontent that spills over borders.”