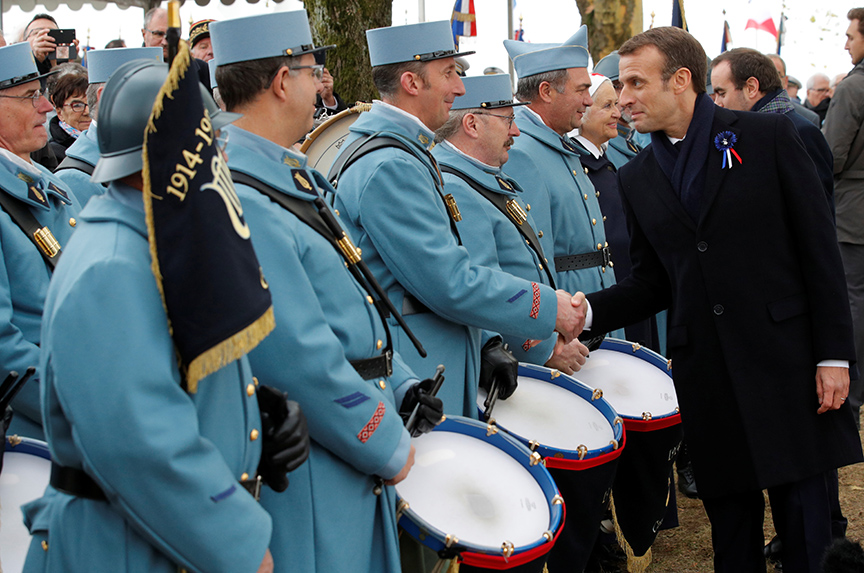 BRUSSELS – Few things in the Old Continent inflame national feelings and fears more about losing sovereignty than talk of a European army.

For example, European Commission President Jean-Claude Juncker raised instant alarm bells, and condemnation, in London and other national capitals in March 2015 when he declared that Europe needed a common army to ward off subversive threats from Russia.

More recently, French President Emmanuel Macron made a similar appeal on November 6. Responding to today’s deteriorating international order, he said Europe must decrease its reliance on what he implied was an increasingly unpredictable United States, a stance US President Donald J. Trump immediately called “insulting,” even if he took Macron’s remarks out of context.

In a speech on November 13, German Chancellor Angela Merkel also called for the creation of a European army.

So how feasible is a common army for the foreseeable future?

Not very—and not just for political reasons, but also for things quite mundane.

The idea has a long and controversial pedigree in Europe, stretching back to the end of World War II. It began with a French-led plan in 1950 for a common army within a European Defense Community (EDC) composed of the so-called Charlemagne Six core countries of Europe: Belgium, France, Italy, Luxembourg, the Netherlands, and the former West Germany. This came in response to growing pressure from Washington to re-arm the West German army to help offset Soviet military power. The EDC aimed to firmly anchor the German military within a common European political-military command structure that would have separate but close links to a nascent NATO.

The six countries produced an EDC treaty in 1952, but it failed ratification two years later by the French parliament which feared a loss of national sovereignty. That European reluctance to step into the void of subsumed military sovereignty has been typical ever since.

Take Germany. Reacting to Juncker’s call for a common army, its defense officials duly said they could support the idea but that it lay “many years in the future.” Naturally, they offered no specifics on how to get there.

Then there was Macron’s call in September 2017 for a “European intervention initiative” (EI2)—a force operating beyond the frameworks of NATO and the European Union (EU) for responding to crises facing Europe. So far nine countries have rallied around France since the EI2’s formal launch in June 2018.

It all looks impressive on paper, yet there have been no concrete details on matters such as how the collective cost of operations would be apportioned among the participating nations. Nor is there any indication the EI2 countries will act uniformly or whether their individual units will be hobbled by operational caveats (exceptions) dictated by their parliaments. Operational costs and caveats always pose major headaches for either NATO or the EU.

Above all, the EI2 will be a joint  force, a combination of autonomous national military components working together. That is not a unitary army.

Proponents of a common European military optimistically cite other factors as indicative of the region’s growing potential for a single army structure: longstanding bilateral military cooperation between EU countries such as the Franco-German European Corps or the German/Dutch Corps, the EU’s multinational Battle Groups or fused military services such as the joint Belgian-Dutch navy. Within none of those structures, however, have the participating governments ceded military sovereignty or the right to withdraw their participation from the arrangement.

Supporters also point to the EU’s recent, unprecedented decisions to financially support common military capability development between nations, preferably within “permanent structured cooperation” (PESCO), the EU’s legal framework for herding its member states toward close defense ties to one another.

PESCO is a good idea and it could become the much-needed seedling from which common military structures might eventually grow. But that depends wholly on whether its twenty-five participating EU countries put big projects, big money, and lasting political commitment into PESCO.

Crucially, they would have to be willing to break the historical links that bind national defense ministries exclusively to their national defense industrial bases. Doing that would allow hard cross-border dependencies to emerge as the foundation for a common army: shared supply chains, mutual security of supply, and common-owned military infrastructure. In other words: a pan-European defense structure on which a pan-European army would rest.

Yet there is not a shred of evidence today that any defense ministry in Europe is ready and willing to do that.

Even if national capitals wanted to lunge for a common army, there are so many technical, legal, and administrative differences between their militaries that it would take decades to produce a smoothly functioning force.

Those differences boil down to some of the most mundane things such as soldiers’ rights. Strong unions representing military personnel in rich Scandinavian countries, for instance, ensure that their soldiers enjoy levels of physical comfort, hardship pay, and access to medical care that their equivalents in poorer southern EU countries can only dream of for an exercise, much less an actual operation. Whose union rules would govern a common European army? And how would that be financed?

The differences are even sharper at the strategic level when it comes to intelligence. As a whole, the EU countries (and those of NATO as well) do not trust one another with sensitive information: it is parceled out very parsimoniously from one capital to a few trusted others. It would never work for a truly common army. Changing that alone via twenty-five-way trust for intelligence-sharing within PESCO would take years and years. Some deem it impossible.

Conclusion: any talk of creating a fully-fledged common army, even within the next generation, is just that: jaw-jaw and not real-real.

Image: French President Emmanuel Macron shook hands with history enthusiasts dressed in vintage army uniforms after a ceremony at the memorial to the World War I Battle of Morhange-Sarrebourg in eastern France on November 5. Macron recently called for the creation of “a true European army.” He said: “We have to protect ourselves with respect to China, Russia, and even the United States of America.” (Reuters/Philippe Wojazer/Pool)