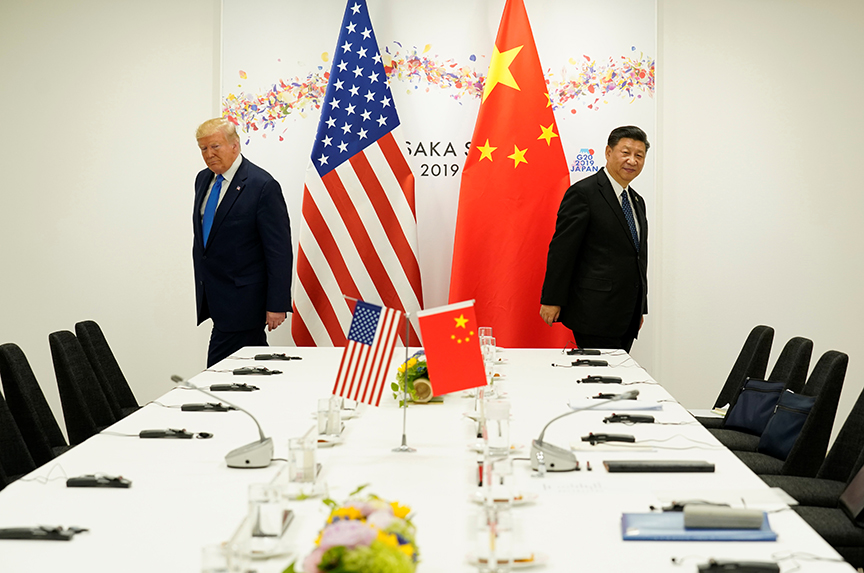 For the first time since the fall of the Soviet Union, the United States finds itself in a great power competition, this time with China. In the post-World War II era, this competition has many more, and more sophisticated, financial battlefields than in the past. In the field of sanctions, there are two issues posed by Chinese behavior: first, the use of Chinese actors to evade sanctions regimes targeting third parties; second, the use of Chinese actors domestically for goals that violate international norms, including on human rights, cyberspace, and territorial sovereignty. Unlike prior enforcement challenges, China’s financial system is of such a scope that large-scale sanctions infractions are difficult to punish with a normal suite of secondary sanctions, highlighting the need to target new sectors of the economy.

With this in mind, Washington should adjust its coercive economic strategy to reflect a broader use of tools beyond sanctions. The end goal of a sanction should not merely be a penalty, but rather a change in an actor’s behavior. Given the degree of political interference in China’s banking system via formal state ownership and the indirect influence of opaque party committees, penalties imposed against the country’s banks, which conduct the majority of their operations in the domestic market, are unlikely to produce a meaningful change in behavior. Although in past disputes with European banks, the threat of secondary sanctions was potent, the wide array of state tools to support sanctioned banks, coupled with China’s hostility to the use of sanctions, reduces this leverage.

The Chinese banks that have been targeted by authorities so far have been small in size, like Bank of Dandong or Bank of Kunlun. But larger firms, like Huawei and ZTE, have been targeted for sanctions infractions in the past. In the present Huawei crisis, the United States is seeking the extradition of the telecommunications firm’s chief financial officer, Meng Wangzhou, not for Huawei’s ties to the Chinese security apparatus, but for the firm’s intentional misleading of Western banks about the nature of its relationship with Skycom, a front company used to do business in Iran. Huwaei’s actions not only benefited an aggressive and expansionist Tehran, but also potentially exposed those Western banks it did business with to sanctions penalties. Given Huawei’s state-of-the-art technology, the costs of such evasion schemes will only grow more potent in the future as the firm takes a leading role in the global 5G marketplace.

In confronting Huawei, like with ZTE earlier, the Trump administration has demonstrated a willingness to water down its confrontational approach against the backdrop of the trade war. This past weekend at the G20 summit in Japan, the core role this played in restarting trade negotiations speaks to the merits of the use and threats of potential abuse of the Entity List designation. Trade policy, the goal of which is to balance the benefits of trade for workers and consumers, differs from sanctions policy, the goal of which is to defend the integrity of the international financial system by excluding rogue actors. In this environment, only the United States’ foes stand to benefit.

Huawei’s broad national security challenge is the result of both Chinese cybersecurity law, which compels the firm to cooperate with Chinese government requests, as well as its opaque relationship with the Chinese government. Yet its sanctions evasion activity is largely assisted by the opacity of its corporate structure, especially when compared with many of its peer companies. Unlike Alibaba or Tencent, China’s two main consumer technology giants, Huawei lacks a public listing, limiting the transparency of both its internal corporate governance and its financial information.

Even by Chinese standards, Huawei’s corporate structure is unique for a private company. Huawei Technologies Inc. is owned by Huawei’s holding company, with roughly 1 percent of shares held by founder Ren Zhengfei and the other 99 percent held by Huawei Holding trade union committee. The shares held by the trade union committee are disbursed among 96,768 shareholders, all of them employees of the company. This gives rise to the notion that Huawei’s shares are owned by its employees, a popular trope about the company that echoes Ren’s humble roots in the Chinese People’s Liberation Army.

But this belies the fact that the trade union committee, if overseen by standard Chinese trade union regulations, would not be accountable to its members (i.e., the employees holding stock), but rather to the next-highest level of the trade union. If the trade union were to be dissolved, the residual after its debts were paid off would not be given to the employee shareholders, but rather to the next-highest level body. At the highest level, the All China Federation Trade Union (ACFTU) sits on the Politburo, enjoying close state connections. In other words, the stock held by the employees is less of a traditional share and more so a “virtual share,” obfuscating the true accountability within the company.

Further, since 2016, the firm has had three rotating chairmen of the board, each of whom serve for six-month terms. Xu Zhijun, Guo Ping, and Hu Houkun rotate for the position, serving as the foremost leader of the company during their tenure. While this collective management policy has no doubt produced stellar commercial results since its inception and structuring, the unique structure also obfuscates the structure of decision-making in the company, harming transparency. In the future, if Huawei were to violate a sanctions regime by, say, exporting advanced 5G equipment to another nation, potentially for use by its military, collective management policy could be problematic.

To deter such scenarios in the future, Treasury’s Office of Foreign Assets Control (OFAC) could be a useful measure. Unlike the Entity List, which China has symmetrically retaliated to with the creation of its own “Unreliable Entities” list, OFAC’s designations would be challenging for the Chinese to respond to without resorting to asymmetric tactics. Unlike Beijing’s “Unreliable Entities” list, which could harm US firms operating in China, the sanctions used by OFAC in pursuing foreign entities would be hard for the Chinese to replicate, least of all due to the renminbi’s lack of market share in international currency transactions. As a result, China might have to resort to asymmetric or informal measures, like consumer boycotts, regulatory harassment, or tourism bans, as used previously against South Korea, the Philippines, and Taiwan.

In any event, OFAC has precedent for adjusting a corporate structure—as with the Rusal deal completed in December 2018. Oleg Deripaska, an oligarch targeted for his role in supporting Russia’s interference in the 2016 US presidential election, saw his personal corporate holdings come under sanctions. Originally holding 70 percent of EN+, the parent company of Rusal, Deripaska’s stake was cut to 44.95 percent, distributed among other shareholders, including VTB Bank OAO, Glencore, and Volnoe Delo, his charitable foundation. More relevant than this are the measures taken to reduce his indirect influence over the company, which could serve as a template for an OFAC deal with Huawei.

Of the twelve directors of the board, Deripaska’s nominees shrunk from nine to just four, replaced by separate nominees, who will exclude the remaining four from the board’s audit and nomination functions. At the same time, a third-party trustee was nominated to limit Deripaska’s influence in voting, capping his voting shares at 35 percent, leaving the remainder, as well as those of his former wife, father-in-law, and charitable foundation to this trustee. In the case of Huawei, OFAC would not necessarily use the same approach, but could tackle some of the transparency issues associated with Huawei’s unique collective management structure, especially at the level of rotating chairmen and within the trade union committee.

Unlike with Rusal, OFAC’s approach would not need to be nearly as harsh, neither requiring a public divestment of major shareholders, as was done with Deripaska, or requiring Huawei to alter its business model with, for example, a public listing. By dealing directly with Huawei, OFAC would also avoid one of the key pitfalls in the ongoing trade war: Beijing’s sharp hostility to changing its political economy, even under strong tariff measures. In this case, the fundamentals of Huawei’s business would not need to change, only the way in which information is disclosed.

It is important to note that OFAC cannot solve the national security problems posed by Huawei with such a move, but rather enhance its compliance programs and management transparency. From a realistic standpoint, not only is Huawei very unlikely to reject a government request for information, the firm’s trade union committee is likely to have significant state influence, potentially rendering the company state-controlled, if not outright state-owned. These threats are better handled within the framework of export controls and cybersecurity, as opposed to sanctions.

Sanctions can be effective in compelling a change in Huawei’s behavior within realistic boundaries. Huawei, due to its central role in 5G infrastructure, is likely to play a leading role in many of China’s overseas investment initiatives, potentially ensnaring sanctioned governments, like Iran. To prepare for such a possibility, greater transparency in its decision-making hierarchy, coupled with closer scrutiny of its actions overseas, is needed.