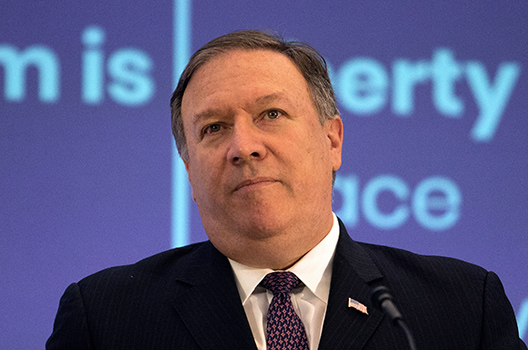 The Trump administration has turned its attention squarely toward the Indo-Pacific, with one eye firmly on an increasingly assertive China.

In a significant policy speech in Washington on July 30, US Secretary of State Mike Pompeo said the United States seeks “partnership, not domination,” in the Indo-Pacific. In a thinly veiled reference to China, Pompeo added: “We… have never and will never seek domination in the Indo-Pacific, and we will oppose any country that does.”

What exactly does the Trump administration’s Free and Open Indo-Pacific (FOIP) strategy set out and how can this goal be achieved in an America First era? Robert A. Manning, a resident senior fellow in the Atlantic Council’s Scowcroft Center for Strategy and Security, discussed the strategy in an interview with the New Atlanticist’s Ashish Kumar Sen. Here are excerpts from our interview.

Q: What is the Free and Open Indo-Pacific strategy?

Manning: Japanese Prime Minister Shinzo Abe has been talking about this for almost a decade. The Japanese have a very developed definition of a Free and Open Indo-Pacific in terms of free markets and freedom of navigation. They have put a lot of money behind it, even redirecting some of their aid programs to places like Myanmar and elsewhere in Southeast Asia.

There really isn’t that much new here. It’s essentially an extension of longstanding US strategy toward the Asia-Pacific outlined in numerous Department of Defense (DoD) Asia strategy reports since the 1990s—open markets, freedom of navigation, peaceful resolution of disputes, all underpinned by the United States and its alliances and security partnerships. We have been a major market for trade and Asia has been a major source for American investment.

It is right to focus on the Asia-Pacific. It is the most important region in terms of the United States’ interests for the future. Unfortunately, we are bogged down in endless wars in the greater Middle East. Strategy is about making choices and priorities, matching resources to goals.

Manning: The answer you would get from US officials is “no.” We don’t know where the trade disputes [between the United States and China] are going. It is possible to have China in an inclusive economic system in East Asia. On the security side, I am less optimistic because of China’s activities in the South China Sea, for example. There is a lot more tension and a lot less overlap of interests.

Q: Is there a danger that FOIP will exacerbate tensions between the United States and China?

Manning: There is an element of strategic competition that exists between the United States and China. Trump’s own National Security Strategy document published last December called China a “strategic competitor” seeking to undermine US interests in the Asia-Pacific. China is well aware of the US posture and rhetoric. It will give China an excuse to argue that [FOIP] is a clear sign of an American containment strategy. I tend to view it more as a counterbalancing strategy.

Q: Given their deep economic ties with China, will the other members of the Quad [besides the United States]—Australia, Japan, and India—support FOIP?

Manning: Yes, in theory. [FOIP] is always framed as being inclusive and open to China, with the usually unspoken caveat that they have free and open policies. But India has made it clear, most recently in [Indian Prime Minister Narendra] Modi’s keynote address at the Shangri-La defense conference, that India seeks an “inclusive” Indo-
Pacific and will not isolate any country.

Q: Is America First, particularly US trade protectionism, contrary to the tenets of FOIP?

Manning: It directly contradicts it. America First by definition is about American sovereignty. Even though his own National Security Strategy talks about the need for multilateralism and American leadership in those institutions, Trump hates everything multilateral. He tore up TPP [the Trans-Pacific Partnership], for example. Look at the Korea talks; before we had six-party talks and now you have the United States and North Korea be the center of diplomacy. So, how do you build cooperative mechanisms when you have a hostility toward multilateralism?

If the United States wants to expand a free and open Indo-Pacific why did we leave TPP? We created TPP and defined it as a major pillar of our engagement in Asia and then we left it. So now you have the Japanese running with it and creating an eleven-, instead of twelve-country trade agreement.

As to US trade policies, we’ll have to see. With Abe pushing the TPP and the EU signing trade agreements with everyone, the result will be American businesses losing competitiveness because as tariffs shrink among the signatories of these agreements they remain the same for US companies. Tokyo hopes that these realities will lead Trump back to the TPP, as he himself has hinted a couple of times.

There is a real risk in what we are doing because we are in a transformational period in technology and the economy, and the question of who sets standards, rules, and norms is a big one.

The United States has been the security guarantor in the region since the end of World War II. Without American leadership things are very uncertain and unstable. If the people see the United States as being less reliable—both as an economic partner and in terms of our security guarantees—that’s going to play against all the things we are talking  about on a Free and Open Indo-Pacific.

Q: At a time when US leadership is strained and China’s commitment to a rules-based international order questionable which countries will serve as anchors of this order in the Indo-Pacific?

Manning: The two potential leaders are Japan and Europe.

Japanese leadership has been really impressive and has surprised a lot of people. In Southeast Asia, Indonesia has the capacity to be a real leader; the Koreans are stuck in the middle and not sure which way to go.

A lot of this also depends on the future of Europe, which has been punching below its weight for a long time. You have Brexit and all the populist tensions. Perversely, the hostility from Trump may be a shot in the arm for a strong and united Europe and French President Emmanuel Macron has outlined an ambitious agenda to achieve this goal. If that happens things will look a little different.

Image: U.S. Secretary of State Mike Pompeo at a press conference at the Ministerial to Advance Religious Freedom at the State Department in Washington, U.S., July 26, 2018. (REUTERS/Alex Wroblewski/File Photo)