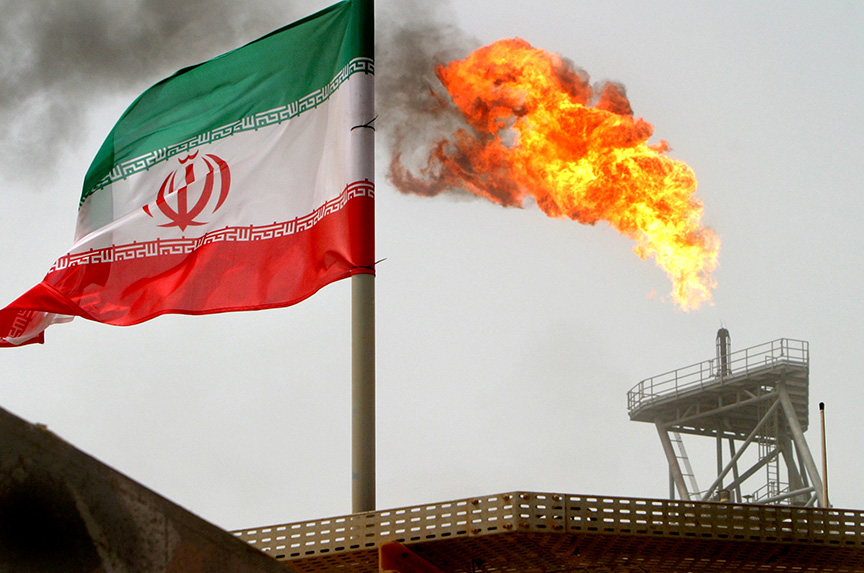 A gas flare on an oil production platform in the Soroush oil fields is seen alongside an Iranian flag in the Persian Gulf on July 25, 2005. (Reuters/Raheb Homavandi)

US President Donald J. Trump’s administration will reimpose sanctions on Iran’s central bank, oil sales, and shipping companies on November 5. These sanctions, the last of those the US lifted in 2016 as a consequence of the Iran nuclear deal, are likely to be coupled with new sanctions that are designed to achieve greater pressure than what the Obama administration imposed on Iran to enter negotiations over its nuclear program.

The sanctions that snap back into place on November 5 largely mirror those that the Obama administration lifted in January 2016. While fewer in numbers than those reimposed on August 6 by Executive Order (EO) 13846 issued by Trump, they are among the most powerful as they expand the primary blocking sanctions available for US designations and represent the bulk of the secondary sanctions on Iran.

Additionally, entities owned or controlled by US persons that have previously been authorized to conduct certain Iran-related business will have to wind down this business on November 5. These entities are largely foreign-registered subsidiaries of US firms, which are not subject to US sanctions in nearly all other US sanctions programs. From November 5 onward, they will be subject to the full sanctions restrictions on Iran that US persons face, and their US parents will face enforcement consequences for any prohibited business they conduct with Iran.

In its quest to achieve “maximum pressure,” it is likely that the Trump administration will try to increase pressure through other new sanctions.

The administration appears to calculate that focusing on Iran’s support for terrorism is the best avenue to exert pressure on the regime. This is, in part, because such designations also carry secondary sanctions and are not eligible for the carve-outs in US sanctions, including humanitarian trade. We have seen designations in previous months target an Iranian bank not previously subject to secondary sanctions and the head of the CBI be designated for the bank’s support to the Islamic Revolutionary Guard Corps (IRGC) and the IRGC’s Quds Force, US-designated terrorist entities.

Other designations since Trump’s May 8 announcement that the United States was withdrawing from the Iran nuclear deal—the Joint Comprehensive Plan of Action or JCPOA—have targeted Iran’s appalling human rights record, its destabilizing activities in the Middle East, and corrupt actors.

It seems likely that OFAC will roll out a raft of similar designations on November 5 in an effort to cut off Iran’s few permissible routes to external trade and to send a message that the United States will forcefully implement its sanctions.

The impact of these renewed and likely new sanctions will be far-reaching. The most widely discussed impact is what will happen to Iranian oil exports and the oil market more broadly.

Somewhat perversely, the oil market may actually loosen as the specific contours of the sanctions solidify. The Trump administration has been negotiating exemptions for countries that “significantly reduce” their oil imports from Iran. It is likely that those exemptions will become public on November 5, or shortly thereafter.

Any exemptions would likely be welcome news for a market that has tightened in recent months and may have priced in an assumption that the Trump administration would try to drive Iranian oil exports to zero.

In the past, Iranian exports of condensate, a byproduct of oil and natural gas production, enjoyed a loophole in the sanctions imposed by the Obama administration. The Trump administration has closed off that loophole, denying Iran a source of revenue.

Renewed banking sector sanctions and the focus on terrorism designations may squeeze Iran’s ability not only to transact with trade partners, but to import critical humanitarian goods, such as food, medicine, and medical devices, that are generally exempt from US sanctions. The Trump administration is already facing significant headwinds from foreign allies and partners on its Iran sanctions policy, and cutting off humanitarian goods or making their delivery more difficult will only increase European and others’ displeasure.

Finally, the fate of the European Union’s two venues for pushback against US sanctions—the renewed blocking regulation preventing EU firms from complying with US sanctions on Iran and a special purpose vehicle (SPV) for trade with Iran—will determine whether the EU can live up to its trade-related commitments to Iran under the JCPOA. Neither is likely to have any significant effect, but the EU’s inability to deliver economic benefit (and possibly increased EU sanctions in the wake of the Iranian assassination plot uncovered in Denmark) may prompt Iran to reconsider remaining subject to the nuclear constraints in the JCPOA.

As I have written before, the Trump administration is unlikely to achieve the same pressure on Iran that the Obama administration used to deliver the JCPOA, given that it is facing broad international opposition to its withdrawal from the deal and the reimposition of secondary sanctions. But that analysis could change dramatically if Iran withdraws from the JCPOA and restarts its nuclear program. The effects of renewed sanctions and Iran’s reaction to them will be the most important strategic factors to watch in the aftermath of November 5.

Brian O’Toole is a nonresident senior fellow with the Atlantic Council’s Global Business and Economics Program. He worked at the US Department of the Treasury from 2009 to 2017. During this period, he served as a senior adviser to the director of the Office of Foreign Assets Control (OFAC). Follow him on Twitter @brianoftoole.