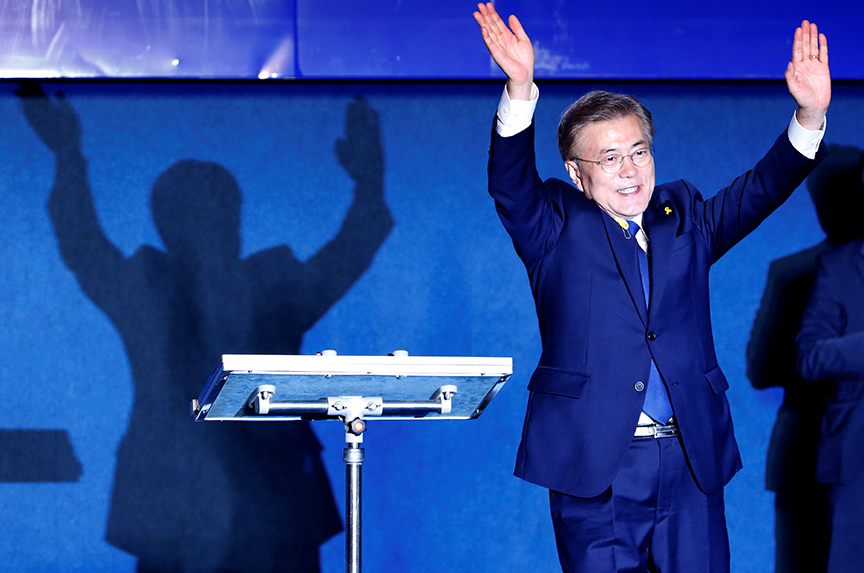 South Korean leftist opposition candidate Moon Jae-in’s impressive presidential electoral victory is reverberating not only across the Korean Peninsula, but throughout Northeast Asia and the United States as well. In a crowded field of fifteen candidates, Moon won 41 percent of the vote, soundly defeating his conservative rival, Hong Joon-pyo, who won 24 percent.

While Moon’s victory almost certainly portends that South Korea will be less in sync with the United States and will pursue more accommodating policies toward North Korea, this election was primarily about Korean domestic issues. “Reform and unity” were the goals Moon articulated.

After months of political turmoil and the impeachment of President Park Guen-hye, Moon will seek to restore domestic political stability. More fundamentally, the election was about corruption, excessive influence of the chaebol (big industrial groups), economic malaise and insecurity, and, not least, inequality. The millennial generation, struggling to find jobs and housing, embodies a populist frustration not unlike that which catapulted Emanuel Macron to power in France on May 7.

That said, the stated intent of Moon and his Minjoo (Democracy) Party, after a decade of hardline policies toward North Korea, is also to return to some variation of the “Sunshine” policy pursued by the previous leftist President Roh Moo-hyun. During the campaign, Moon opposed the deployment of the THAAD anti-missile defense system (though he later reversed himself on it) and said he would go to Pyongyang for a summit to restart inter-Korean dialogue.

But Moon’s quest for reconciliation with the North comes at a time of unprecedented tension on the Korean Peninsula, a race by Pyongyang to attain an inter-continental ballistic missile and a more sophisticated nuclear arsenal, and growing US-led efforts to pressurize and isolate North Korea. Moreover, under the Sunshine policy pursued first by former President Kim Dae-jung and later Roh, Seoul transferred more than $2 billion to North Korea over more than a decade, resulting in little reconciliation and much hard currency provided to fund Pyongyang’s weapons of mass destruction programs. The Kaesong Industrial Complex shut down by Park had transferred some $500 million to Pyongyang’s coffers during its years of operation.

If Moon pursues a separate “people-to-people” track—low-key reconciliation steps—reunions of divided families, sports and cultural exchanges or offers to train North Korean MBA students or lawyers, tensions with the United States would be minimized. But if he tries to reopen the Kaesong Industrial Complex or offer economic aid, that would undermine the US-led effort to put pressure on Pyongyang to restart denuclearization diplomacy.

Perhaps the most likely foreign policy shift by Moon will be to reopen the deal made by Park with Japan in 2016 to compensate and apologize to “comfort women” who Japan used as sex slaves during their occupation of Korea during World War II.  Japan’s colonial history in Korea is an open, nationalist, emotional sore in South Korea, but such a move could also put at risk important US-South Korea-Japan trilateral strategic and intelligence cooperation urgently needed to deal with North Korea.

In any case, Moon faces some dicey issues with the Trump administration.  Trump’s inflammatory comments made in the midst of the Korean election campaign—demanding that Seoul pay $1 billion for the THAAD deployment and that the US-South Korea bilateral trade accord be ripped up or renegotiated—had the unintended effect of boosting support for Moon. But these challenges foreshadow some tough negotiations and speed bumps ahead in the US-South Korea relationship.

If Trump insists on South Korea paying for THAAD it would provide an excuse for Moon to take the issue to the National Assembly and likely result in THAAD being removed. The deal the United States had made for THAAD was that Seoul would provide the land and infrastructure, and the United States would pay for THAAD and operations costs. If the United States reneges on its word it would spark nationalist resentment from a Korean public overwhelmingly supportive of the US-South Korea alliance. Seoul has already been hit with more than $1 billion in economic coercion and boycotts from China as a result of THAAD deployment.

Even if the THAAD issue doesn’t erupt, the current host nation support agreement expires in 2018, and the United States and South Korea, which currently provides $875 million—50 percent of the cost of stationing 28,000 US troops in South Korea—will have to negotiate another cost-sharing accord.

In addition, Trump wants to renegotiate the US-South Korea trade accord. While it is hardly the “disaster” Trump describes it as, the United States has a $28 billion trade deficit with South Korea, in part due to a weak won and slow growth in South Korea. If a renegotiation updates the agreement to cover new areas like digital commerce and more services, it might not generate much friction. But it could easily become a major source of contention, and perhaps push Seoul toward Beijing.

Many who have talked to Moon in recent months say that the former human rights lawyer has matured and moved more to the center. Issues from North Korea and THAAD to trade will test that notion. But clearly, US-South Korea relations are in for a rough patch at a dangerous moment in time.

Robert A. Manning is a senior fellow with the Brent Scowcroft Center on International Security and its Strategic Foresight Initiative at the Atlantic Council. You can follow him on Twitter @Rmanning4.