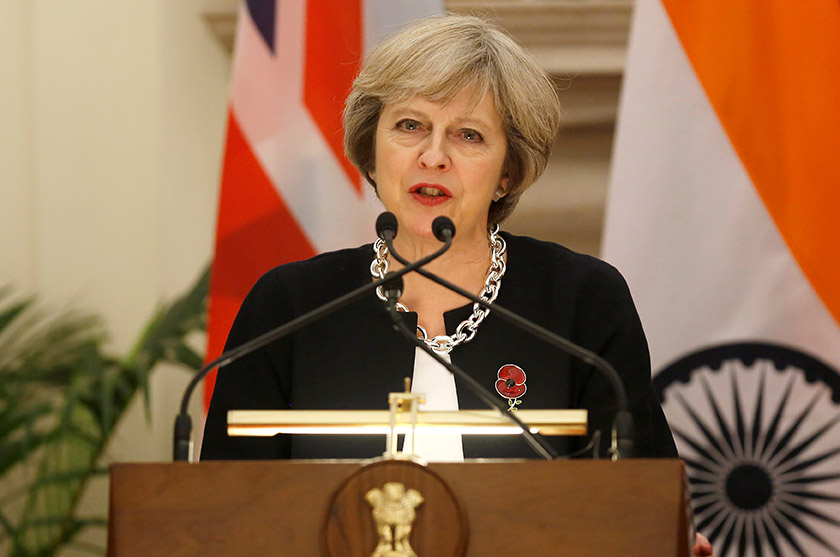 The November 3 ruling by a British High Court that Parliament must vote before the British government invokes Article 50 of the Lisbon Treaty has been seen by many as making it less likely that the United Kingdom will leave the European Union. In reality, although it may slow the process, it could also lead to a much more difficult negotiation with the other EU member states, and even increase the likelihood of a “hard Brexit” in which the UK loses access to the Single Market.

Assuming the Supreme Court confirms the High Court ruling in December, British Prime Minister Theresa May will be faced with two options. First, her government can send a bill to Parliament aimed at securing approval for its course of action vis-à-vis Brexit. If done under the emergency process, this would not cause a considerable delay. The government may also decide to use a resolution, rather than a bill, which can be passed in as little as a day. It is likely that Parliament—both the House of Commons and the House of Lords—would approve the move to Brexit despite Parliament’s supposed majority in favor of remaining in the EU.

The strong British sense of fair play makes it unlikely that members of Parliament would be eager to overturn the referendum and be accused of dictating to the public. More important, the Conservative government has a majority of fifteen in the House of Commons, and it would undoubtedly expect all party members to support the government, whatever their own personal feelings. It should not be forgotten that Parliament is different from the US Congress, which is designed to provide “checks and balances” to the executive. In the UK, MPs from the governing party are expected to support the government, and in the case of a Brexit vote, the government would undoubtedly insist on that support, with strong penalties for any dissenters. Given the disarray in the Labour Party, the government may well pick up a few supporters who either genuinely support Leave or who do not want to be seen as voting contrary to the will of the people.

However, Parliament can modify a bill or resolution in a way that imposes conditions on the government’s strategy. Similarly, while the House of Lords cannot stop a determined House of Commons, it can also try to impose conditions on the government’s negotiating strategy.  Those conditions are most likely to involve retaining access to the Single Market and limiting free movement of EU citizens. There could also be an insistence on escaping the jurisdiction of the European Court of Justice. But if Parliament passes a bill that imposes these specific aims on the government, it could lead to the outcome least intended by those who initiated the case—a hard Brexit.

While it is often ignored in the British discussion, the fact is that there are twenty-seven other negotiating partners, and they hold most of the power. The UK’s post-Brexit relationship with the EU will not be determined by a simple British choice, but by the willingness of the EU-27 to reach agreement and they are determined that the UK will not be in a better situation after Brexit than any EU member state. For all EU members, access to the Single Market requires free movement of people and submitting to ECJ jurisdiction. This is also the case for Norway, which is not even a member and pays a lot of money for the privilege. If the UK were to trigger Article 50 with the government instructed to secure both access to the Single Market but limits on free movement of EU citizens, its negotiating partners would wonder why the UK believed for one second that it could secure a result that gives it more benefits and fewer costs than any real member state. With no negotiating room because of Parliament’s instructions, the May government would find itself unable to reach agreement with the others before the two-year clock on negotiating an exit runs out. The UK would then simply fall out of the treaties and would be at the mercy of its negotiating partners for any transitional or post-Brexit arrangements.

May also has a second option—a snap election. If she decides that Parliament, in passing a bill, has imposed so many conditions that it has unjustly tied her hands, she may decide to go to the country. In the very unlikely event that Parliament voted down a Brexit bill, she would have to call an election if her government was to retain any credibility. A prime minister cannot repeatedly say “Brexit means Brexit and we are going to make a success of it” and then just accept Parliament’s disagreement.

While some may see a general election as a second referendum and hope that the British people will reconsider their earlier vote, the reality is more complicated. May would undoubtedly campaign on a pro-Brexit ticket, but one that gives the government the flexibility to get “the best deal possible.” Labour’s approach to Brexit is so muddled and its general policy approach uncertain given the split between leader Jeremy Corbyn and the parliamentary party that it is unlikely to be an attractive option for voters. Those supporting Remain would be left with the option of the small Liberal Democrats, or the Scottish Nationalists, at best a regional choice. Opinion polls since the June referendum show a steady rise in support for the Conservatives. The latest YouGov poll shows 41 percent for Conservatives, 27 percent for Labour, 11 percent for the UK Independence Party (UKIP), 10 percent for the Liberal Democrats, and 6 percent for the Scottish National Party (SNP). Thus, if May decides to call an election, she will most likely end up with a free hand to pursue the Brexit negotiations.

The government is now appealing the High Court ruling. It may succeed and thus win a flexible mandate for the Brexit negotiations. But if the ruling stands, efforts by Parliament to limit the government’s negotiating options may dangerously stalemate talks with the EU-27 and preclude reaching an agreement. Or the prime minister may find it tempting to call a general election. In either situation, the most likely result is a “hard” Brexit, or worse.

Image: British Prime Minister Theresa May, seen here on a trip to New Delhi on November 7, can send a bill to Parliament seeking approval for her government’s course of action on Brexit or she could call a snap election. (Reuters/Adnan Abidi)