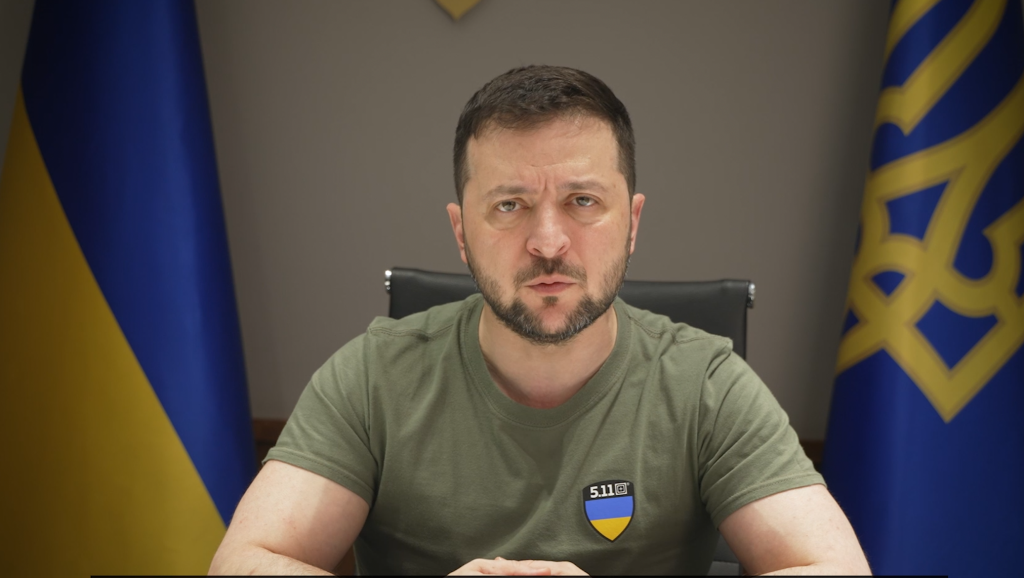 Ukrainian President Volodymyr Zelenskyy delivered a special video message at the Atlantic Council’s 2022 Distinguished Leadership Awards, which included an award for the Ukrainian people. Watch his moving address and read the full transcript below.

This year’s edition of the Atlantic Council’s premier gala honored Italian Prime Minister Mario Draghi, business leader Claudio Descalzi, Ukrainian singer Jamala, and the Ukrainian people for their commitment to the Council’s mission of shaping the global future together.

Ladies and gentlemen, on behalf of all Ukrainians, I would like to thank you for this award. It is a fair and correct gesture to honor with this award all the people of Ukraine, because courage is our national trait of character.

Today the whole world witnesses this and admires the heroism of Ukrainians. At the same time, I want it not to become something ordinary for everyone. And for this we must say and remember that behind the courage and wisdom of our people, there are thousands of real stories, names, and heroic feats. The world should know about them and to have a clear idea and understanding about the people of Ukraine.

First of all, we are the nation of the best defenders. These are our ground forces, air and naval forces, airborne-assault troops, special operations forces, the National Guard, intelligence, border guards, and territorial-defense fighters. This is Vitalii Skakun, who blew up a bridge, sacrificing himself to stop a column of Russian tanks. This is twenty-one-year-old lieutenant Vitalii Sapilo, who neutralized thirty units of equipment of the enemy and died from an air strike. Serhiy Pantelyuk, who was injured while repelling the attack and died at the hospital while his first daughter was being born. These are the border guards of Zmiinyi Island who were not afraid of the flagship of the Russian fleet—the cruiser Moskva—and sent a Russian ship in a direction that became world-famous. These are the indomitable defenders of Mariupol and Azovstal, who have been holding the line there for several months. These are all our fighters who died defending Ukraine, hence defending Europe. I would like to ask you to honor their memory with a moment of silence.

Thank you. The Ukrainian people are people who do not spare themselves for the sake of others. This is combat medic Diana Kukurudziak, who pulled sixteen wounded soldiers off the battlefield in one day. Paramedic Serhiy Chernobryvets in Mariupol, who has been on duty for twenty-two days since the beginning of the war. The Ukrainian people are a nation of courageous children. This is eleven-year-old Maksym, who said nothing to his mother, ran away from home, and came to ask for permission to be a part of territorial defense. This is seven-year-old Varya from Kropyvnytskyi, who gave her money saved for a smartphone to buy bulletproof vests, and then sold flowers and drawings. This is a fifteen-year-old girl from the Luhansk region who was driving a car with shot legs and took out four wounded. A fifteen-year-old boy who carried his wounded mother in his arms for three kilometers to the evacuation point.

Our people are also elderly people who have experienced too many ordeals. This is Borys Romanchenko, who passed through the hell of Buchenwald and died at the age of ninety-six at home during the shelling of Kharkiv by the Russian Federation. This is Vanda Ibedkova, who was a child hiding in the basement, survived the Holocaust and the Nazi occupation in Mariupol, saw the second occupation of the city in 2014, and the third this year. At the age of ninety-one, she had to hide in the basement again where she died on the fortieth day of the war. This is eighty-seven-year-old Halyna Kotubey from the Mykolaiv region, who remained the only and last resident of her village but refused to leave.

The Ukrainian people are a nation where hundreds of thousands fight and millions help. This is a business that has shifted to the needs of the country. Clothing designers sew military uniforms, restaurateurs feed free lunches, bakeries bake bread for IDPs [internally displaced persons] and lonely people. This is a university professor who continues to lecture to his students in the trenches. A violinist playing for people during an air alarm in a bomb shelter. These are civilians of Ukrainian cities and villages, who became a living wall on the way of the occupiers—stopping military machines and turning tanks in the opposite direction. These are inhabitants of Demydivka, who flooded their own village not to let the occupier into Kyiv. Those who despite threats, shots, and stun grenades go to peaceful rallies, reminding the occupants that this is Ukraine: Kherson, Melitopol, Berdyansk, Enerhodar, Mariupol and all the other cities and villages of Ukraine occupied not for a long time.

These are millions of Ukrainians who are now defending their homeland and the whole world. Do not be afraid and come to Ukraine. Hear thousands of similar stories about us, Ukrainians. Look into their brave eyes, shake their strong hands, and you will see that they are doing all this not for glory, that they need not only awards, but also concrete help and support. Weapons, equipment, financial support, sanctions on Russia, and the most important: the feeling that in this difficult struggle, they are not alone, that they are supported by you, by the whole world—free states and free nations of our planet. Thank you for your attention! Thank you for your support! Thank you for the award! And welcome to Ukraine! 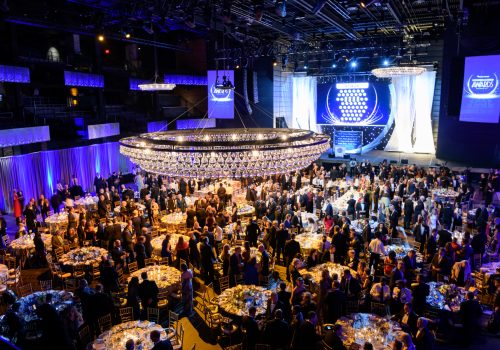 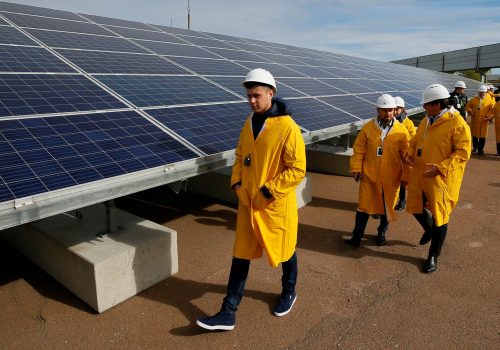 Help Ukraine now, and it could power Europe later

The world should help rebuild a peaceful country that would contribute to Europe’s long-term energy security, argues the CEO of Ukraine's largest electricity producer.

Image: A screenshot from Ukrainian President Volodymyr Zelenskyy's video message to the Atlantic Council's Distinguished Leadership Awards dinner on May 11, 2022.