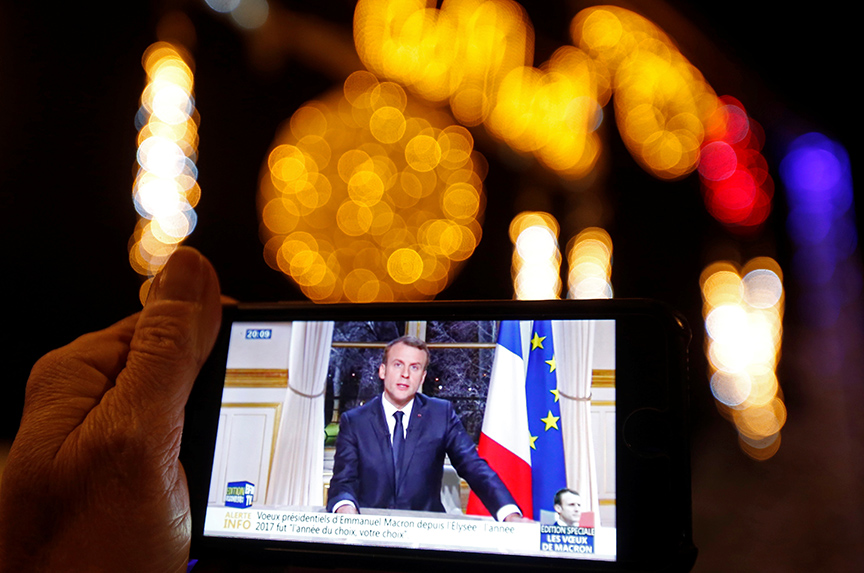 French President Emmanuel Macron is seen on the screen of an iPhone in Marseille as he delivered the traditional New Year speech during a primetime news broadcast at the Élysée Palace in Paris, France, on December 31. (Reuters/Jean-Paul Pelissier)

Just as Queen Elizabeth II offers her yuletide greetings to the British people in her Christmas Day broadcast each December 25, so, tradition goes, the president of France presents his New Year’s wishes to the French people on December 31. Emmanuel Macron’s speech on the last day of 2017 was his first New Year’s address. He sought to be exceptionally inclusive and unpolitical; then, toward the end of his remarks, he began to give a glimpse of his larger, long-term vision for France.

Macron started by saying he would not dwell on the events of 2017, but he could justifiably have underscored how momentous those events actually were. In France and abroad, his election in May 2017 is largely perceived as having blunted the progress of the far-right National Front and, more broadly, having countered the advance of the populist right which had resulted in Brexit and the election of Donald Trump.

But Macron’s election was hardly business as usual and his accomplishment stretches well beyond his electoral victory: in one fell swoop, he upended the left and right of French politics as they had existed since the end of World War II.

Not only did he manage to win the presidency, as a previously unknown and unelected individual, but he put in place in record time the grassroots local and regional movement which provided him, in the month following his own election, a comfortable parliamentary majority with which to govern. Macron’s campaign book was entitled Revolution and, in his own and his movement’s sweep to power, he turned the old French politics inside out, destroying the left and marginalizing the right. In doing so, Macron’s new French revolution actually strengthened France’s institutions rather than undermining them.

Perhaps Macron wished to avoid any hint of playing “Jupiter,” as he was accused of doing when restoring the monarchical dignity to the exercise of the French presidency to which the French people aspire and which his predecessors had cheapened by acting as political operatives. Indeed, in his New Year address, Macron referred more than once to the work of the prime minister and the government, underscoring his determination to reaffirm France’s constitutional duality of “a president who presides and a government which governs.”

If Macron chose not to emphasize the accomplishments of 2017, including successful and significant liberalization of the antiquated French labor code, he was similarly loath to lay out a detailed political program for 2018—which is indeed the province of the prime minister and the government. He chose instead to stress inclusiveness, mentioning the need for better mobile telephony service in rural areas, improvements to transport, the need to combat discrimination in underprivileged neighborhoods. He turned to foreign affairs, assuring the French that terrorism would be defeated and mentioning mostly the Middle East as priorities for French foreign policy.

After this he hit his stride and began to articulate elements of his political philosophy, which he has hitherto been reticent to express in grand strokes. First, he returned to his core themes of education, work, Europe, and the environment. He described his aspirations for Europe as an “economic, social, ecological, and scientific power to take on China and the United States,” while championing the values that Europe stands for. He described the lynchpin of European revival as the close working relationship between France and Germany, echoed by Germany’s chancellor, Angela Merkel, in her own New Year remarks.

More strikingly, he called for increased “national cohesiveness” in France, whose foundations lie in education and lifelong training; he stated again his belief in the value of work, which in France is often viewed as an imposition rather than an opportunity; he called for greater solidarity in society, helping the disadvantaged.

As he reached the beginning of the end of his speech, Macron hit full stride and honed in on major messages: commitment by the French and renewal for France. In a nearly Kennedy-esque phrase he called on the French to “ask yourself every morning what you can do for the country” and “remind yourself that you belong to a collective bigger and stronger than you,” the French nation. France put you through school, he said, France looks after you when you are sick, France helps you get up when you falter, France looks after you in old age: “tell yourself every moment that you have to do something” for France.

Such a call to action to the French people is close to unprecedented since Charles de Gaulle and outside times of national crisis. “I need your commitment,” Macron said. And then said that “the French people is a great people” which sometimes underestimates its own worth. “We are capable of the exceptional.”

Macron ended by asking for a spirit of conquest, determination, and ambition, which, he concluded, could lead to a “French Renaissance” in the 21st century.

Until now, Macron has focused, rightly and successfully, on performance: delivering reforms, minimizing protest against change, restoring the prestige of the presidency, and reasserting the role of France in the world. The end of his New Year address foretells the possibility that he may, as 2018 unfolds, feel more and more at ease with articulating his political philosophy and inspiring the French people to believe in, and participate in, the rebirth he clearly envisions as the next chapter in the destiny of France.