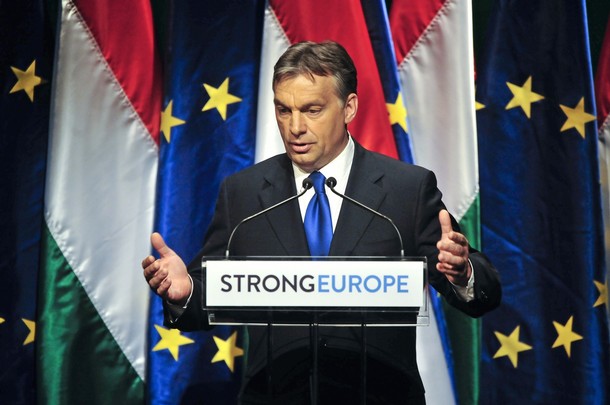 There has not been much positive to read about Hungary in the news lately, but the country’s embattled government really hit rock bottom last week.

First, Armenia cut diplomatic ties with Hungary after the extradition of an Azeri army officer convicted over the brutal axe-murder of an Armenian soldier in 2004. Ramil Safarov had killed Gurgen Markarian, his fellow classmate at an English-language military training course in Budapest organized by NATO. A Hungarian court had sentenced Safarov to life. Upon his arrival in Azerbaijan last week, Safarov was immediately pardoned and treated as a national hero.

The diplomatic fallout is already tangible. It is no small feat to anger Washington, Brussels, and Moscow at the same time. Yet the Hungarian government pulled that trick in this case. The White House and the State Department are demanding explanation from both Baku and Budapest. As rhetoric heated up in the volatile region, the EU and the Minsk Group had to call upon Armenia and Azerbaijan not to escalate tensions. Russia, Armenia’s main ally, fumes.

Hungarian authorities claim they allowed for Safarov’s return to Baku only after receiving credible assurances from the Azeri government that he would serve out the remainder of his prison term. The letter from the Azeri government underpinning this assertion, however, contains no such guarantee. Thus, at the very least, the Hungarian government is guilty of negligence. But it is widely assumed that Hungarian Prime Minister Viktor Orbán’s government made the deal to extradite Safarov in exchange for a money infusion that would help ensure his political survival.

The diplomatic fiasco is directly linked to Orbán’s bigger problem: how to shore up state coffers to prevent a financial and economic meltdown. His “unconventional” policies that included confiscating private pension funds, levying extra taxes mostly on foreign companies and killing lending activity by a prohibitive bank tax drove Hungary’s economic growth into the ground. To avoid the political and economic about face that subscribing to EU/IMF conditionality would represent, he has recently been shopping – mostly in vain – in Beijing, Moscow, and the Gulf for lower-than-market interest rate loans. Intensive bilateral discussions, statements, and media reports of late have all been pointing to an impending Azeri purchase of Hungarian government bonds worth 2-3 billion euros. Shortly after the extradition of Safarov, Orbán “unfriended the IMF” on Facebook: a move against the allegedly unacceptable preconditions involving steep cuts in social spending. Never mind there are no such demands at this point: the IMF letter he referred to only advocates economic policy changes in general, like boosting investor confidence by providing a stable legal framework. In reality he is concerned about the political preconditions the EU and the IMF rightly set. He balks at restoring some checks and balances into Hungarian democracy weakened by his efforts to centralize power.

Instead of admitting failure, Orbán seems ready to sacrifice the remnants of the country’s once venerable international clout. One can argue about the benefits of trade and investment deals with authoritarian states. Governments can and indeed should dispute terms and conditions when negotiating a loan deal with the IMF. But relinquishing fundamental values for money without strings attached is not only wrong but counter-productive. Any arrangement with Azerbaijan could unravel in the face of EU and US outrage, especially given the importance of the ethnic Armenian vote during a US election year. The economic value of such deals is also questionable: interest rates on preferential loan agreements with third countries would likely be still higher than what the country could secure from the IMF and the EU.

Hungary has been adrift for a while. Once-pro-Western, moderate voices within Fidesz, the governing party, fiddle to the nationalistic tune Orbán plays. The country’s centuries-old drive to be firmly anchored in the West has been compromised by a government mired in the past and losing touch with reality. If the suspicion surrounding the Safarov-case turns out to be true, that will signal an ultimate loss of moral sanity.