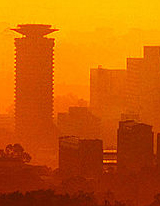 Deputy Director of the Brent Scowcroft Center Jeff Lightfoot reflects on the urbanization panel at the 2013 Strategic Foresight Forum.

The trend of global urbanization is changing the way cities interact with the countries in which they reside, other cities around the globe, and the citizens that inhabit cities around the world. The fifth panel of the day, “A New Model of International Governance – Why Cities Will Lead the Way” focused on the way mass urbanization is changing governance, politics, geopolitics, and the economy.

The world today has 1000 cities of over 500,000 inhabitants or more, and more than 1/3 of the world’s cities are larger than 1/3 of the countries admitted in the United Nations. Therefore, cities have clout, both in the countries of which they are apart, but also independently and as a network of global cities. Cities are becoming increasingly aware of their importance and of the necessity of fostering a growing dialogue among mayors to exchange best practices and advocate for common interests, even if those interests on occasion differ from those of national governments. This has been particularly true in the case of the fight against climate change, where cities have taken matters into their own hands to fight the rise of carbon emissions, sometimes in the face of resistance by national politicians.

Cities are also associated with innovation and technology, which has led some countries to develop new, greenfield cities as a means of fostering innovation and technological development in their home countries. South Korea and the Kingdom of Saudi Arabia were both cited as countries that have attempted to create new cities or special urbanized industrial zones to foster domestic innovation and a knowledge economy. These projects, and others, have achieved mixed results, in part because they were created for economic purposes with urbanization as an afterthought.

As cities rise in global prominence, they may seek their own legal regimes or their own immigration provisions to suit their own self interests, even if this runs contrary to national policy. This leads to the question of how cities will interact with national polities and fellow citizens in the coming years in both developed and less developed countries. One member of the audience pointed out that this harkens back to the Renaissance in Europe where city states were the most advanced economic and political entities, and which were only later subsumed into the nation state. It leads to the prospect of a world where cities may declare independence from their countries, which has enormous political and economic implications going forward.

Cities were also cited as an example of more effective and responsive governance, aided in part by new technologies. Citizens in cities are leveraging these new technologies to take matters into their own hands and encourage more efficient governance.

Cities in the global South – while often described in the context of slums – were cited for lessons learned they could offer cities in the North, notably in the context of transport and collectivization. At the US level, Detroit was referenced multiple times in the discussion as a city that was ultimately doomed to fail because it was a monoculture, over reliant on one source of industry and a few companies that serviced that sector. Today the challenge for Detroit is to reactivate public spaces and invest in public transport.