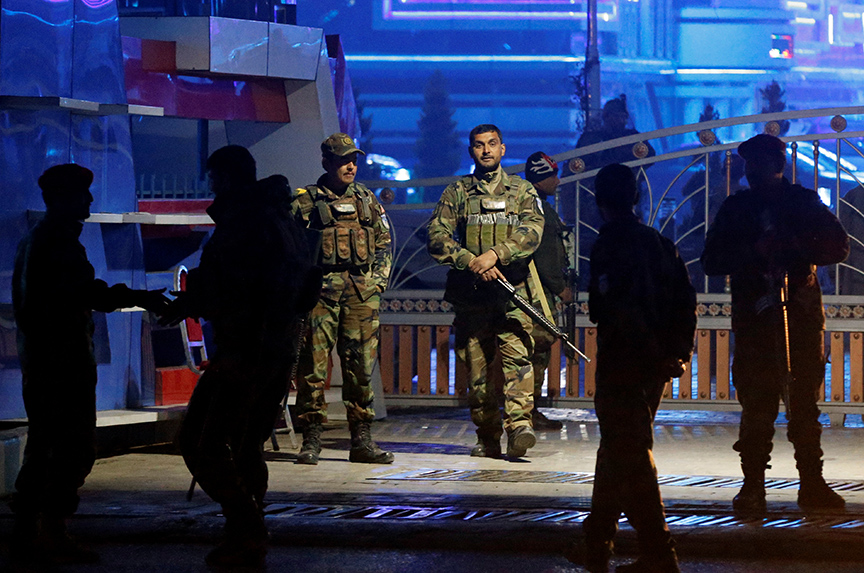 Afghan security forces arrived at the scene of a suicide bomb attack in Kabul, Afghanistan, on November 20. (Reuters/Omar Sobhani)

Even as another turbulent year draws to a close in Afghanistan, 2019 could end up becoming a pivotal one for a nation caught between geopolitical power projections, evolving peace and political pressures, and contrasting visions for the future—unless there is a concerted effort to agree on an inclusive, practical, and time-bound political process that includes a peace plan.

Over the past two weeks, a spate of suicide attacks and assassinations, deadly ambushes of security forces, ethnic and communal provocations, and closure of transportation arteries have caused disruptions and left hundreds  of civilians and security forces dead and injured across the country. Although undocumented, dozens of Taliban and IS-KP fighters (a local outfit tagged as Islamic State Khorasan Province) and scores of civilians living under their control are also reported to have been killed in sporadic clashes.

The timing of these developments could not be more unsettling. International community representatives and Afghan government leaders are meeting in Geneva  this week “to show solidarity with the Afghan people in their efforts for peace and prosperity” and measure “results against the $15.2 billion committed to Afghanistan in 2016.” The Afghan government is expected to “renew its commitment to development and reform… and maintain the momentum for elections and opportunities for peace.” A tall order at a time when a rush to discuss the future of the US/NATO military presence is entangled with a complex political transition, including four simultaneous sets of elections (presidential, provincial, district, and in Ghazni province) slated for 2019, a rise in tactical violence, and geopolitical wrangling.

Following one of Afghanistan’s deadliest suicide attacks last week, Afghan President Ashraf Ghani indirectly blamed the Taliban and asked that they “stop killing.” Ghani, who has indicated that he will run for a second presidential term in 2019, said “sanctuaries and support infrastructure of suicide attacks, training centers and financial resources of terrorist are all located in a neighboring country.” While he did not name that country, he went on to ask Afghanistan’s “international friends to identify the government and countries that support acts of terror.”

Meanwhile, Afghanistan’s Chief Executive, Abdullah Abdullah, who is contemplating his own political future, struck a negative tone about peace efforts on a visit to France. He said that despite US overtures, the Taliban “have not shown any intention to get seriously engaged in peace negotiations.”

In private, the Taliban have sought to do away with next year’s presidential elections. They want an interim government to be established under a neutral leader once the United States agrees to discussions on a troop drawdown timetable as part of a peace deal.

As the election commission dithers over election dates, the Afghan government prefers that the vote be held as scheduled in April. Meanwhile, the Afghan government and various political groups are working to put together an authoritative and representative peace team that can, at the right moment, engage in face-to-face talks with the Taliban, as proposed by the United States.

Former Afghan President Hamid Karzai has proposed holding an extraconstitutional loya jirga, while former national security adviser and presidential hopeful, Haneef Atmar, favors consensus-building and “complementarity” of the peace and electoral processes. Others are calling for a joint Afghan-international parley, similar to the 2001 Bonn Agreement, to draw up a new political roadmap.

Political observers in Kabul, however, warn that a process that is rushed and fails to build consensus or integrate all domestic and regional viewpoints might result in a debacle reminiscent of the one that followed the weak Geneva Accords of 1988, ending the Soviet occupation of the country.

The US role, both as negotiator and broker, is being watched very closely by regional actors and seen by many Afghans as crucial to seeking a fair, balanced, and inclusive outcome.

The Trump administration’s recent decision to engage in direct talks with the Taliban on ending the seventeen-year-old war and seek an “intra-Afghan” political settlement—a shift from its initial policy of breaking the military stalemate before talks—has turned Afghan political calculations and regional hedging on their heads.

The United States’ special envoy for Afghanistan, Zalmay Khalilzad, who has thus far consulted Afghan politicians, Pakistan, Saudi Arabia, the United Arab Emirates, and Qatar, is working to have the main stakeholders agree to a “roadmap to Afghanistan’s future.” Russia, China, Iran, India, and Afghanistan’s Central Asian neighbors have not yet been part of the US consultations. The Russians, who have voiced doubts about US intentions, hosted a peace parley of their own with the Taliban in Moscow earlier in November. A constructive US entente with Russia and China on an Afghan endgame can have far-reaching consequences as long as Afghan political representatives are also part of these consultations.

Meanwhile, direct talks with Iran, another key neighbor, currently pose a challenge as relations between Tehran and Washington are strained. However, if Iran views the US gambit as threatening it might opt to push back forcefully, complicating attempts to build a regional consensus.

On Pakistan, Trump once again berated that country’s leaders in a tweet in which he wrote, “they were just one of many countries that take from the United States without giving anything in return.” Despite such strong rhetoric, the United States is hoping that its Arab allies will put pressure on Pakistan to nudge the Taliban to the negotiating table.

The Afghan government, the United States, and others involved in the fight inside Afghanistan maintain that Pakistan’s covert support for the Taliban has inflamed the situation.

While an emboldened Taliban sees an opportunity to reimpose its governance in all or a majority of Afghanistan, serious questions are being raised in Kabul about what kind of country and vision best suit today’s Afghanistan.

Some warn of a return to Talibanization, while others believe that a decentralized system can accommodate different visions and expectations. Others are calling for a constitutional order that fundamentally protects the gains of the last seventeen years, including on gender rights and freedom of expression, but are open to selective negotiations and amendments that do not take the country back to pre-2001 conditions.

If the Taliban insist on restructuring the political system and imposing their strict agenda, certain democratic rights enshrined in Afghanistan’s 2004 constitution could be scratched or diluted.

The de facto fracturing of Afghanistan into part battlefield for proxy rivalries, part a new buffer belt dividing moderates from jihadis and extremists is an ominous scenario that should also be avoided.

Aiming for a win-win outcome

In the midst of a flurry of initiatives, a calibrated and negotiated Afghan endgame is needed for a comprehensive settlement that reflects all Afghans’ aspirations, takes maximum advantage of the country’s geography and untapped resources, assures legitimacy and relative stability but, above all else, is not rushed at a time when key strategic challenges need to first be addressed.

Reaching consensus inside Afghanistan on a shared vision and inclusive plan of action, while rebuilding an international consensus that views the country as a regional platform for cooperation and connector for economic integration, are essential prerequisites for a successful political settlement.

For a country that has not experienced durable peace since 1978, 2019 could be a momentous and fateful year.