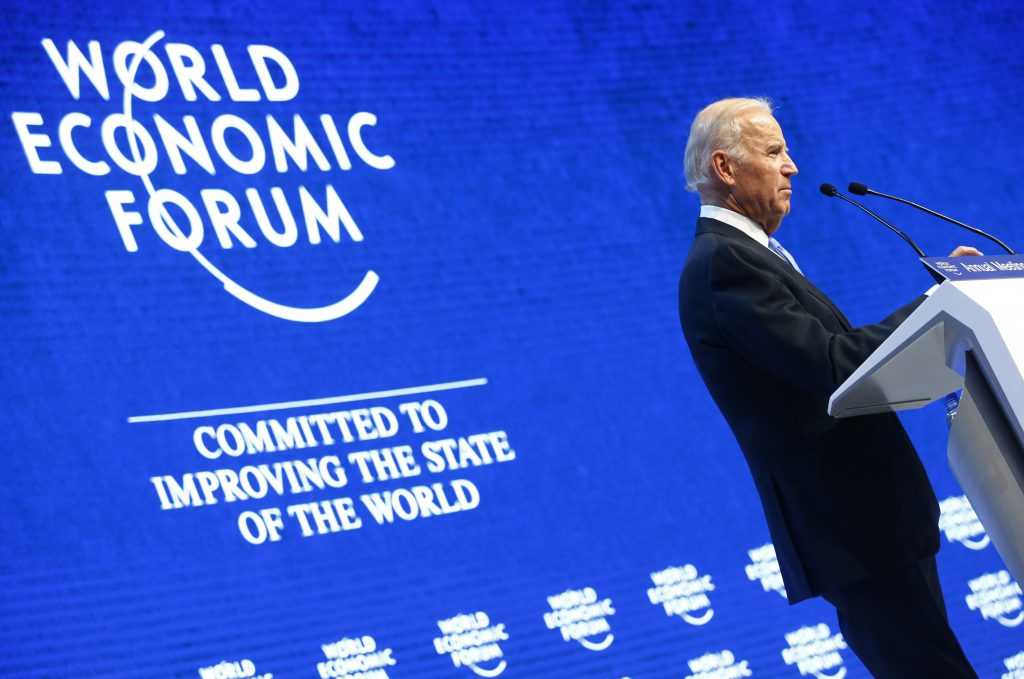 The European Union’s unity is being tested in some significant ways. Chief among these challenges are the United Kingdom’s potential exit—a “Brexit”—from the EU, mediocre long-term economic prospects, an influx of migrants that is the largest movement of people on the continent since World War II, geopolitical threats posed by a revanchist Russia and a Middle East in the midst of upheaval, and the task of developing a digital roadmap that will support competitiveness and growth. Europe’s future hinges on how it addresses all these issues.

A new white paper produced by the Global Agenda Council on Europe and rolled out at the World Economic Forum’s (WEF) annual meeting in Davos, Switzerland, on January 21 takes a closer look at these challenges and analyses the consequences of Europe’s success as well as its failure in dealing with them.

Damon Wilson, Executive Vice President of the Atlantic Council, is the only American serving on the WEF Global Agenda Council on Europe. As a contributor to the white paper, he discussed some of these challenges in an interview with the New Atlanticist’s Ashish Kumar Sen. Here are excerpts from our interview.

Q: What are some highlights of the white paper?

Wilson: The purpose of the paper is to flag what will be some critical inflection issues for Europe in the coming year, and present a view of what that means for the business community, but also more broadly for the future of a coherent Europe. We also wanted to spell out from an analytical point of view what the consequences will be if things go right or if things go wrong on these sets of issues. We have built this paper around five key themes: the economy, digital Europe, migration, geopolitical risks, and the Brexit. These are going to be the primary movers and drivers of the European political economy in the coming year.

Wilson: The rise of the anti-establishment forces is a somewhat understandable reaction to the economic trauma that Europe has gone through and the sustained sense of a lack of growth and opportunity. If you think about 30 percent unemployment rates for youth continuing over generations and what the implications of that are it speaks to why you are seeing some of these challenges.

At the same time, you see the tension between shared versus national sovereignty. While the EU has failed to address some of Europe’s key challenges, it is often because of national prerogatives. Yet in many of these cases, you need a more European solution to address these problems effectively. At the end of the day, a beggar-thy-neighbor approach is not going to lead towards either higher economic growth or achieving great political objectives.

For Europe to be relevant in the world today it needs unity. The ability to address borders, open markets, create a common digital platform requires more integration, but it is swimming against the political stream right now.

Q: Does the looming threat of a Brexit present an existential crisis for the European Union? After all, even if British voters decide to remain in the EU this episode is expected to inspire calls in other countries—the Netherlands, France, Czech Republic, for example—to renegotiate the terms of their EU membership.

Brexit’s complication is significant because one, it will suck the political energy and oxygen out of much of Europe this year. Two, it is extremely risky to hold a referendum in a volatile and turbulent environment where you have refugees pouring onto the continent. Polling is unreliable and things can change very dramatically at the last minute.

But from a strategic sense, what is most alarming is a United Kingdom that is, from an American standpoint, no longer helping to the shape the future of and anchor Europe in a certain direction in terms of markets or foreign policy. A Europe without the United Kingdom is not in the United States’ interests—neither is a United Kingdom or, if you daresay, a reduced Great Britain, playing a diminished role in the world today. The last thing we want to see is London take on a marginal role in international security and in promoting free commerce or human rights.

Q: Much of Europe is struggling with the realities of a shrinking working-age population and low population growth. The white paper sees the flood of migrants into Europe as an opportunity. What should governments be doing to harness this opportunity?

Wilson: This was one of the controversial parts of the paper that I argued for. We recognize the enormous challenges posed by the refugee and migration crisis. The New Year’s Eve incidents in Cologne only underscore those challenges and the political costs of managing this crisis. Nonetheless, we thought that we needed to look into the future and think about the impact of this precisely because of the lack of demographic growth and the challenges of entering the labor market in many European countries.

By getting an injection of young, often educated, folks in the population there is an opportunity to help fuel economic growth and create positive pressure for labor market reforms, which allow greater flexibility and easier entry into the market for all sorts of individuals. This is a challenge in the short term because of different worldviews that some of the migrants may bring in terms of respect for women or homosexuals. There are real social hot-button issues today, which are fueling the debate as we have seen in the wake of Cologne. But over time, the challenge of Europe’s future is about the future of identity. Part of what Europe is struggling with is the idea of pooling more sovereignty in a more united Europe because Europeans still see themselves along narrow ethnic and national lines. The increasing diversity of the populations on the continent may accelerate building a European identity to supplement national identity.

This is controversial, but it is also partly why we thought that while it is important to recognize the enormous political challenge that comes from this migrant crisis in the short term, it is equally important to keep in mind that this could be part of Europe’s salvation in the medium term.

Q: Russia poses a significant security challenge on Europe’s east. Does the EU today have a coherent policy to deter further Russian aggression?

Wilson: We have seen remarkable European unity in holding the line in a common transatlantic approach to ensure that Russia pays a price for its actions in Ukraine. This has been bolstered by German Chancellor [Angela] Merkel’s leadership and the continuity and extension of the sanctions on Russia.

That said, there is not a common strategic view of a more enduring strategy towards Russia in Europe or across the transatlantic space. Mr. Putin knows this and hopes to play on these differences. That is one of the great challenges for the coming year: whether the European Union can maintain a common approach to Russia that doesn’t repeat the mistakes of the past and simply absolve Moscow of its behavior. The Kremlin risks learning that it can act egregiously, as it has done in Ukraine and previously in Georgia, and with time simply paper over those differences and get back to normal in its relationships with Europe.

This is another reason why having the United States at the table on Ukraine and Europe’s east is so critical. Only a transatlantic approach will keep the Kremlin’s attention.

Q: What challenges does Europe face on moving forward with its agenda of creating a digital roadmap that supports competitiveness and growth?

Wilson: The work that the European Commission is undertaking is part of underpinning both an integrated European market but, importantly, the fundamentals of growth in the future by creating the right platforms and regulatory environment.

The recent Safe Harbor ruling risks throwing a wrench in transatlantic digital cooperation and putting an albatross around Europe’s neck in terms of being able to leverage its advanced technology and workforce, and develop this space as a driver of growth. There is a real burden on Europe to work with the United States and sort through these issues.

Q: The European Union is grappling with a diverse set of challenges at a time when the white paper notes that the United States will be chiefly focused on the presidential election in 2016. Is this bad news for the Europeans?

Wilson: The American public may be increasingly distracted by the political high season that we are entering right now, but I don’t think the [Obama] administration is distracted by the election cycle The administration is, in some respects, in overdrive on the diplomatic front. We see Vice President [Joe] Biden in Europe right now conducting important meetings in Davos, overseeing what may be a historic deal on a unified Cyprus, flying to Turkey to continue to advance an incredible agenda, remaining heavily engaged in how to keep Minsk alive in Ukraine.

President Obama himself has committed to travel to Germany as part of a push on advancing the Transatlantic Trade and Investment Partnership (TTIP). So you see across the agenda activity to try to deliver on some of the issues that have been percolating in the administration.

Even in this very difficult and rancorous year in Europe, the United States could deliver on the TTIP negotiations; nudge forward a European Energy Union, which is part of both a growth strategy as well as Russia strategy; advance digital cooperation; send the right signals on Brexit; and oversee a breakthrough on the small and enduring conflicts, whether they be in Cyprus or in Macedonia. At the top of that agenda is holding the line and bolstering the prospect that Ukraine could regain its territory through Minsk and Secretary [of State John] Kerry’s work in Syria to try to hit at the origins of the migrant crisis and create a more sustainable playing field in Syria, Libya, Afghanistan, and Iraq. These are not insignificant things that the administration still can get done in its final year if it remains focused and tackles them with resolve.

Image: US Vice President Joe Biden addressed the annual meeting of the World Economic Forum (WEF) in Davos, Switzerland, on January 20. Damon Wilson, Executive Vice President of the Atlantic Council, contributed to a WEF white paper, “Europe: What to Watch Out for in 2016-2017.” (Reuters/Ruben Sprich)