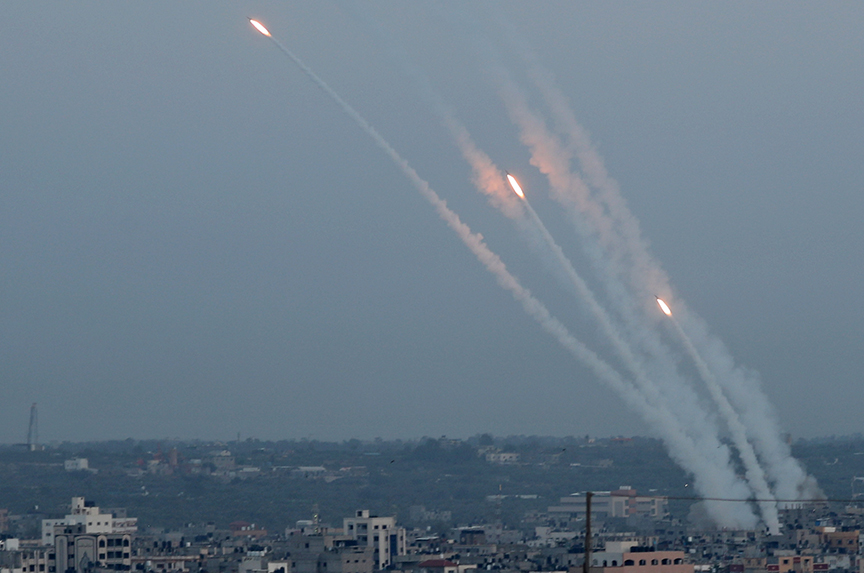 The latest round of fighting between Israel and Palestinian militants in Hamas-ruled Gaza ended abruptly on the morning of May 6, when an apparent ceasefire came into effect. Details of the deal — brokered between the parties by Egypt, Qatar, and the United Nations — still remain sketchy at this time, but neither Israel nor Hamas seems to have emerged as a clear victor from the skirmish.

Although similar to earlier occasions on which blows were traded over Israel’s Gaza frontier, this past week’s altercation was extraordinary nonetheless for its intensity, including the highest fatality numbers on record since Operation Protective Edge in the summer of 2014: four Israelis and twenty-five Palestinians lost their lives in the two-day battle which followed the violent protest along the border fence on May 3.

The timing of the flare-up is believed to have been intentional — with a confluence of events on Israel’s national calendar having provided an opportune backdrop for Hamas to pressure Israel at precisely this juncture.

Amid complaints that Israel has been slow in implementing past understandings vis-à-vis Gaza, the Palestinian factions had threatened to reignite hostilities. The paralysis which a full-blown war could have inflicted potentially upon Israel — only days before the country holds public observances of Memorial Day (May 8) and Independence Day (May 9), and one week before Tel Aviv plays host to the annual Eurovision song contest — put the Netanyahu government in a particularly vulnerable spot.

While Hamas wanted undoubtedly to “remind” the international community that the movement continues to wield influence over events in the region — most specifically, as the Trump administration reportedly prepares to present its peace blueprint next month — it is widely presumed that Hamas and Israel were amenable to suspending combat. Both parties wished undoubtedly to improve their strategic posture in the theater, but they also recognized that one knows only how such battles begin. Where they stop, nobody can foretell. And the risk of the situation spiraling out of control is always great.

The Israel Defense Forces (IDF) would have been capable surely of wreaking further devastation upon Gaza, whose residents would then be inclined to vent their frustrations against the Hamas government responsible for their fate. On the Israeli side, prolonged school cancellations and other manifestations of life under the specter of missile barrages would exact an intolerable price from the population. Another concern for Israel would be the possible spillover of unrest from Gaza into the West Bank, with its attendant consequences for Israel’s heartland and an increased burden on its security services.

Since conditions on the ground remain inherently unstable, what happens next is an open question. Spokespersons for Hamas and Israel are claiming assuredly to have triumphed. But Hamas — no matter its boasting of achievements from the recent exchange — will continue to nurse a grievance against Israel. And Israelis, especially those living within firing range of Gaza, will continue to insist that their government eradicate the tangible threat to their safety from Hamas and PIJ terrorism.

That’s why the most likely scenario moving forward entails more of the same.

Israeli Prime Minister Benjamin Netanyahu, engaged presently in forming his next coalition, is no less wary than before of undertaking a large-scale action against Gaza. The resources which such an operation — not to mention a broad takeover of Gaza — would require, and the casualties it would produce, are a formidable deterrent factor. It’s also been argued that Netanyahu is actually interested in safeguarding (as it were) Hamas as a viable counterweight to Palestinian Authority President Mahmoud Abbas’ government in Ramallah. Those imperatives would argue, paradoxically, for Israel to preserve some form of the status quo opposite Gaza. Hamas, too, will likely settle upon a sustained course of intermittent conflict through which it exercises a degree of leverage over Israel.

The truce on May 6 was not accompanied by formal statements of agreement. Israel simply lifted protective restrictions placed on areas targeted from Gaza. Netanyahu, in fact, went on record saying that “the campaign is not over and it demands patience and sagacity. We are prepared to continue.” Hamas, meanwhile, remains committed dogmatically to the cause of armed resistance against Israel.

All signs indicate that we can thus expect to witness a repeat performance of this weekend’s events before too long.

Image: Rockets are fired from the Hamas-ruled Gaza Strip toward Israel on May 5. (Reuters/Mohammed Salem)