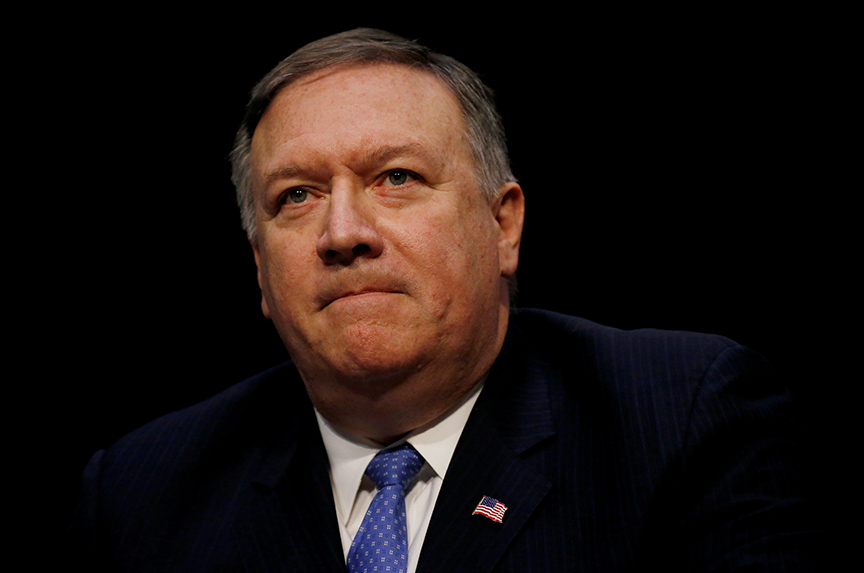 Recent events in Washington, especially the nomination by US President Donald J. Trump of Mike Pompeo to be the next secretary of state and US imposition of tariffs on aluminum and steel imports, combined with a Europe that is politically weakened and internally focused, are helping create what may become the worst divergence in the transatlantic relationship since the 2003 crisis over the war in Iraq.

Unlike the Iraq split, which was over one issue—Franco-German opposition to the US intervention there —the new crisis involves a wide range of complex issues that will be much more difficult to resolve.

The replacement of Rex Tillerson with Pompeo, whose paternal great-grandparents came to the United States from Italy, is being greeted in Europe with caution and concern.

Tillerson, who favored traditional diplomacy, often agreed with his European Union (EU) counterparts on key issues such as Iran and climate change and was one of a handful of US officials who sought to reassure Europeans that the United States remained committed to the transatlantic alliance.

Pompeo is a national security expert but has no diplomatic experience and is widely believed to share Trump’s hawkish views on most international issues. Europeans, on the other hand, place much greater emphasis on diplomacy over the use of force.

While Pompeo’s specific views on Europe are not yet known, he may well clash with European officials on a range of issues given his past policy pronouncements, for example, favoring regime change in Iran and North Korea.

On the other hand, if he can revitalize the State Department and better manage the implementation of US diplomacy than did Tillerson, that would be welcome in many European capitals and would facilitate cooperation on issues where the two sides of the Atlantic largely agree such as on China and Syria.

Transatlantic relations have been fraying since well before the election of Trump in 2016 as a result of US political and diplomatic retrenchment from Europe that began under the Obama administration, which pivoted its foreign policy from Europe to Asia, and growing divergence in policy preferences between US and European leaders.

The present rift is more specifically a product of the Trump administration’s recent moves to implement the president’s more radical policy ideas such as the trade tariffs and a likely decertification of the Iran nuclear deal in May, which the EU, a signatory to the deal, favors and has worked behind the scenes to shore up in recent months.

The Trump administration’s move last year to deploy US military equipment and forces to Eastern Europe partly put to rest concerns about the president’s commitment to NATO given his previous statements about the allies not paying their fair share of the military burden and his initial failure to endorse NATO’s mutual defense clause during his first trip to Europe last May.

But last fall a Pentagon official criticized recent EU efforts to cooperate more closely on defense as a threat to NATO, which would undercut the administration’s efforts to increase European defense spending and encourage the EU to put more emphasis on independent capabilities.

Trump is now moving to turn his previously-stated critique of Europe as military free riders who take advantage of the US economically into concrete action by imposing tariffs on steel and aluminum without offering an exemption for Europe as he did for Mexico and Canada.

Trump’s framing of the tariff issue as one of national security led EU trade commissioner Cecilia Malmström to ask: “Are Europeans not US allies, rather than threats to American national security?”

European Council President Donald Tusk on March 14 echoed this concern and challenged Trump to reopen stalled negotiations on an US-EU trade pact, the Transatlantic Trade and Investment Partnership (TTIP), rather than fight a trade war.

Guardian columnist Natalie Nougayrede noted that the Trump tariffs could really be designed to split EU countries from each other given Trump’s frequent comments about negotiating a trade deal with the United Kingdom once Brexit is complete and his suggestion that he might encourage Poland—the one EU country he has praised—to split from Germany on car exports and other trade matters.

Meanwhile, Europe remains largely focused on its own project within the EU.  And key allies such as British Prime Minister Theresa May are less inclined to act as intermediaries than in the past because of strained ties with Trump, exacerbated over issues such as the US president’s initial failure to show solidarity with the United Kingdom over the Russian nerve agent attack on a former Russian spy and his daughter on March 4.

Angela Merkel, Germany’s chancellor who just began her fourth term, has seen her status within Germany and the EU diminished after almost a half a year of negotiations to form a new coalition.  Plus, Trump’s frequent bashing of Germany make it harder for her to mediate the transatlantic rift.

Merkel and French President Emmanuel Macron are trying to reform the EU, but that effort, which has failed to command support in some EU quarters, will be much harder given the rise of populist forces in countries such as Italy, which will likely soon have a government that is skeptical about the EU and NATO.

Atlantic Council expert Stanley Sloan, in a new book, warns that “the populist radical right surge that has hit both sides of the Atlantic in recent years has revealed failures of and weaknesses in Western democracy that, if not attended to, could destroy the unity of principles and purpose that have defined ‘the West’ for over seven decades.”

The wide range of issues currently dividing the transatlantic allies and the new, “unleashed” approach of the US president, are contributing to a dangerous and growing rift.  To address it, experts say the Trump administration should rethink its tariffs, either offering exemptions for Europe or aiming them squarely at China; support EU efforts to develop a European pillar within NATO; and work towards a unified transatlantic position on key issues like Russia and Iran.

Image: US President Donald J. Trump has nominated Central Intelligence Agency Director Mike Pompeo (pictured) to serve as the next US Secretary of State. Pompeo, whose paternal great-grandparents came to the United States from Italy, is being greeted in Europe with caution and concern. (Reuters/Eric Thayer)