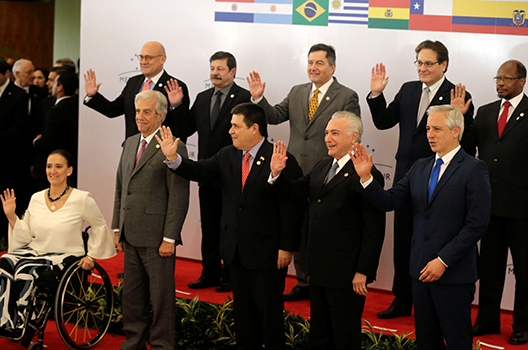 Stronger Ties Between Mercosur and the Pacific Alliance are Viable, and the International Scene Favors Them

This article was originally published in Portuguese in O Estado de S.Paulo on July 21.

The first meeting of presidents of Mercosur and the Pacific Alliance countries, in Mexico, on July 24, is not just another presidential summit in which much is said and little is decided. First, this meeting represents the culmination of an intense, four-year effort to bring the two sub-regional blocs closer. Second, the uncertainty, rifts and conflicts that plague the international scene create favorable conditions for convergence in Latin America. The summit could, thus, signal a turning point in the sequence of efforts begun in the 1960s – with the founding of the Latin American Free Trade Association (LAFTA) – to promote, if not regional integration, at least free-trade agreements or preferential trade zones, which have so far achieved relatively modest results.

Instead of relying on the signing of treaties that are both too ambitious and unrealistic, the on-going convergence starts from what has already been achieved in the region and moves further ahead or in a better direction. This is probably the greatest difference between what has been done in the past and what is happening today.

In fact, much has already been done in each of the sub-regional groups. Despite exception lists and other obstacles along the way, Mercosur, which includes Argentina, Brazil, Paraguay, Uruguay, and Venezuela (currently suspended), was finally established in 1991. It has consolidated a free trade zone, adopted a common external tariff (albeit imperfect), promoted partial regulatory harmonization, and concluded trade agreements, although limited, with countries outside the continent. Brazil set the example by unilaterally lowering its import tariffs to zero, not only for Mercosur members, but also for other South American countries.

Although established more recently, the Pacific Alliance has, in some areas, moved forward more quickly.  Created in 2011, the alliance that includes Chile, Peru, Colombia, and Mexico has set more ambitious goals for itself in the form of greater integration that assures the free movement of goods, services, capital, and people. Besides reducing and eliminating tariffs, the alliance has set out to negotiate complex matters, such as rules of origin, technical barriers to trade and expanding regional value chains. It has not, however, been able to negotiate bilateral concessions under a universally-valid umbrella agreement.  Paradoxically, the level of trade between Pacific Alliance members and Mercosur – especially Brazil – is several times bigger than the level of trade among the Alliance’s members.

Developments on the world stage have created additional incentives for the two blocs to converge. Globalization brought prosperity and unprecedented advances in knowledge. However, it has also given rise to imbalances, uncertainty and brought back nationalism in the form of protectionism and anti-immigrant sentiment. Furthermore, globalization has gone as far as to call into question the very foundations of liberal democracy. Traditional political parties have been challenged and the specter of populism has been resurrected. The post-Cold War liberal order and multilateralism have given way to a resurgent geopolitical scene marked by competition among the great powers, or even by conflicts. With regard to trade, the scenario is that of a weaker World Trade Organization (WTO) coupled with the apparent decision by the European Union not to move ahead with an agreement with Mercosur – a decision that, if carried out, could prove to be a strategic mistake.

Our region seems to have managed to protect itself from several of these destabilizing developments, although it might suffer indirect effects from some of them. Brazil’s case illustrates it well: we have not globalized our economy too much, but too little. We are not motivated by protectionism; rather, we need to move towards a more open economy. The recent series of crises that afflicted the country showed the strength of our democratic institutions and confirmed our commitment to freedom of opinion. Something similar is happening in many of our neighboring countries. Free elections are now the rule – not the exception. The number of democracies in the region has risen markedly. Mistrust of parties and leaders – which seems to be a universal phenomenon – has not affected our commitment to democracy. We affirm our long-standing support for multilateralism, and we do not want our region to become a stage where the great powers compete for markets and spheres of influence.

We have, then, good reasons to engage in an effort to achieve a Mercosur-Pacific Alliance convergence, as well as economic harmonization based on free trade and investment that benefits consumers and creates jobs. Together, the two blocs account for approximately 80 percent of Latin America’s GDP, population and territory. The eight countries that make up these blocs form a constellation of democracies and market-oriented economies prompting the region to convergences in a fruitful dialogue on topics of common interest. Finally, harmonizing our rules and trade practices will not disadvantage potential partners outside our region. Rather, potential partners will benefit from the dissemination of similar regulatory frameworks in several countries of the continent.

There is still time to erase a new Tordesillas line that was being drawn to separate countries in the Atlantic coast from those in the Pacific coast, as in the colonial era. President Donald Trump’s decision to withdraw the U.S. from the Transpacific Partnership and renegotiate NAFTA could favor hopes for a greater convergence in Latin America.

The next stages have already been outlined by Chile, in a draft itinerary, further developed by Brazil, and now consolidated by Mexico, the host of the Summit meeting in Puerto Vallarta.

The course is set, the project is viable, and the international scene provides momentum.

Sergio Amaral is the Brazilian Ambassador to the United States.