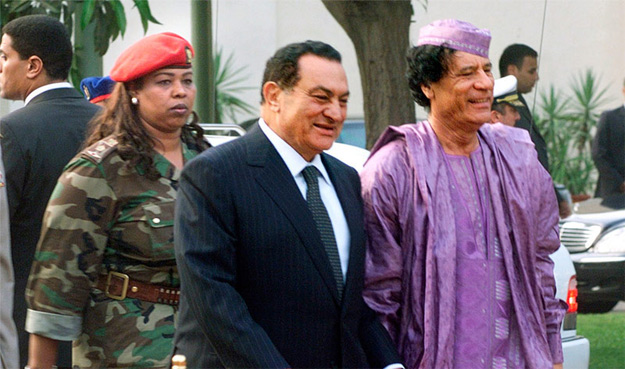 Neighboring Egypt and Libya are two very different places in many respects. Egypt’s historical pedigree is one of the oldest, and it is among the world’s civilizations, whereas Libya has historically been someplace that others occupied: the Carthaginians, Romans, Vandals, Ottomans, Italians, and after World War II, the British and the French. Egypt has also known its share of overlordship from the outside, but it still retains a historical pride manifested by its monuments to fallen pharaohs, the Pyramids. The Libyans have, well, sand.

Libya is physically a much bigger place than Egypt, with an area almost six times that of Egypt (680,000 square miles to 109,000 square miles of Egypt), but it has far fewer people (a little over 80 million Egyptians and about 6.5 million Libyans). Most of Libya’s territory is uninhabited desert wasteland, whereas the Nile Valley provides an inhabitable base for so many more Egyptians. The one thing of value that Libya has in its favor is oil: there are an estimated 43.76 billion barrels of sweet Libyan oil under the Libyan sands, compared to a paltry 4.76 billion barrels under Egypt (principally in the Sinai Desert,the discovery and exploitation of which was compliments of Israel during its occupation following the 1967 war. Without oil, Libya is not much of a world factor; Egypt is the largest power in the region, oil or not.

The other thing that contemporary Egyptians and Libyans have in common is that both have lived for long periods under authoritarian rule. Hosni Mubarak, until his recent cessation of rule (it may be more accurate but unnecessarily unkind to say his overthrow), had been in charge of Egypt for 32 years; Muammar Qaddafi, by contrast, has been in power for 42 years of, shall we say, unsaintly rule. His passing from the roster of world heads of government will likely be lamented even less than Mubarak’s.

Both of these former air force officers presided over governments that were cruel, corrupt, and highly authoritarian, and it is little wonder that both accumulated–at least among those of their detractors they did not kill–a sizable level of opposition. In Egypt, the opposition congregated in Tahrir Square and grew (was allowed to grow?) until it reached such proportions that Mubarak was forced to step aside. Qaddafi, maybe learning from what transpired across his border, offers no such quarter to his growing opposition. When his own troops have shown reluctance to slaughter their fellow citizens, he has simply hired outside goons with no such compunction to do the dirty work. As the anti-Qaddafi revolution moves closer to Tripoli, Qaddafi is hunkering down and vowing to fight to the death. No graceful exit appears possible here, as in Egypt.

The two dictators do indeed offer different tales as power has slipped through their fingers. Mubarak always had the flair and charisma of your average mop handle, but when the inevitable began to surround him, he also had the dignity to step aside after seeing his pleas to his fellow citizens to let him stay rejected in the streets. He may have had to resign in some level of disgrace, but at least he has accepted his fate. How the Egyptian people will ultimately deal with him is uncertain, but it is unlikely the disposition will be as violent as the fate that met Saddam Hussein.

Qaddafi, however, is displaying the same kind of psychotic bravado that he always has as the flames lick at his heels. Qaddafi is, and always has been, flamboyant, from his outlandish dress to his Castro-like (and length) rants about all who were out to get him. Mubarak will be remembered, Soviet-style, for his black suits, white shirts, and black ties; Qaddafi will be remembered for looking like something out of Haight-Ashbury during the height of the drug culture. He says he plans to live and die in Libya; it looks increasingly like he had better choose between the latter or living out his life somewhere else.

The other thing that strikes me about the contrast between the two people and places is how the United States is dealing with them. President Obama has been criticized (I think unfairly) for being too slow to dump Mubarak and come over to the revolution against him. This represents, in my view, two contradictory characteristics of American relations with Mubarak and a whole lot of other dictators with whom we have dealt in the past. The first, and guiding characteristic, has been that these dictators have been loyal allies, willing to cooperate with the United States in whatever we asked or demanded of them, whether it be opposition to communism or terrorism or, in the case of Egypt, making nice with Israel. This has, in turn, led to the second characteristic, which has been an American policy that has looked the other way regarding the untoward behavior of our friends and allies (while working behind the scenes to get them to clean up their acts). The result has been to align ourselves with regimes who support our geopolitical preferences but whose behavior toward their own citizens violates all or most of what Americans stand for. When things come unraveled, we are thus stuck with the dual emotions of gratitude for friendship and loathing of the records of our friends (and thus support for those who seek to overthrow them).

None of this is a problem with Qaddafi. He has never been a friend or ally of the United States–if anything, he has always been our opponent. It was his regime, after all, that blew up the Berlin nightclub that became a major reason for our 1986 air strike against him and the attack on Pan Am Flight 103 over Lockerbie, Scotland (which was at least in part a retaliation for the 1986 raid). Qaddafi has, in recent years, backed away from some of his more egregious behavior (e.g. weapons of mass destruction programs), but has never been anything resembling a friend (and we get hardly any oil from him).

In these circumstances, there are no nostalgic obligations to come to the aid of an old ally as the Libyan noose tightens around the dictator’s neck. Instead of hedging and softening our criticism because we owe him for past favors, we are free to denounce Qaddafi and enthusiastically join the chorus demanding his removal, as the President has done. Having stayed out of the Libyan muck, we don’t have to take a shower before joining the dissent, and there is no hypocrisy in our support for transplanting American values onto another shore. That, of course, feels pretty good. Maybe it even suggests which tale to replicate in dealing with tomorrow’s dictators and their inevitable decline. Just a thought.

Donald M. Snow, Professor Emeritus at the University of Alabama, is the author of over 40 books on foreign policy, international relations, and national security topics. This essay first appeared at his blog What After Iraq?