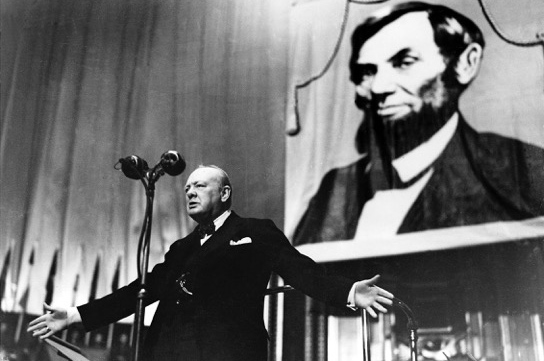 British Prime Minister Winston Churchill delivered remarks at a celebration to mark Thanksgiving Day at the Royal Albert Hall in London on Nov. 23, 1944.

On Nov. 23, 1944, the British Prime Minister made his way to the Royal Albert Hall where the American community in London was commemorating Thanksgiving. It’s not clear whether Winston Churchill invited himself or if his remarks were planned. In any case, his presence was an inspiring surprise for the audience. He spoke for a few minutes without notes. His memorable statement is best absorbed by listening to the somewhat haunting partial recording.

By the winter of 1944, Churchill foresaw that the Allies were going to prevail in the war in Europe and in the Pacific. That year had seen the D-Day invasion of France as well as the bloody battles of Mariana and Palau that had pushed the Japanese towards defeat. In a line that elicited spontaneous applause, Churchill recognized the “sober fact” that in three or four years, the United States had become the greatest military power in the world, and that that “is itself a subject of profound thanksgiving.”

The fighting in Europe ended in May 1945 and in the Pacific three months later. By this time, the toll of war was almost inconceivable:

(To get further perspective on the human cost of the war, see Neil Halloran’s extraordinary visualization of World War II deaths.)

Indeed, as 1944 came to a close, with the end of this worldwide horror in sight, there was much to be thankful for, or at least hopeful for, among the Americans and British that Thanksgiving Day.

For historians, the seventy-one years between Churchill’s remarks and today is barely a flicker of time. Perhaps it is too early to put recent history into a greater perspective, but at a moment when fear of terrorism, fear of cyber attacks, fear of “others” of all kinds seems to dominate our media and political discourse, there are many elements of history since 1944 that we should celebrate and for which we can give thanks.

Compared with the horrible World Wars of the twentieth century, especially World War II, the conflicts we are experiencing around the world today are exponentially smaller, but by no means less tragic for those affected. While we have the military potential to do great harm to each other as nations, there is little evidence pointing in the direction of wars that would in any way match the scale of the World Wars of the last century. This fact in no way diminishes our obligation to actively guard against such future catastrophes. The primordial obligation of our leaders is to ensure that major powers do not go to war with each other.

The waves of fascism and communism that emerged in the form of powerful military and political challenges to liberal democracies in the second half of the last century are essentially gone from history. No major nation currently presents or even aspires to present a similar threat to the United States or its allies. That is not to say that there are no threats, but the bullying of regional dictators or acts of terror by militant Islamists, as ugly and deadly as they are, do not pose an existential threat to Europe or the United States. Reducing or eliminating terror threats is important. But it is disingenuous and disrespectful to compare these threats to the massively organized evil that was confronted and defeated by our parents and grandparents at enormous cost.

Churchill would never have imagined the prosperity that emerged in the post-war period. After years of war-induced penury in Europe and Asia, both regions slowly emerged as economic powerhouses. Despite our tendency to focus on the latest economic downturns, the standard of living in the United States is extraordinary, and even more extraordinary is the progress made in China and parts of the developing world in recent years. While economic competition can be a rough game, there are currently only the rarest hints of the kind of economic imperialism that led the Japanese leaders to believe deeply that war with the United States was their best option in 1941.

One of the most memorable phrases in Churchill’s address was his comparison of American life and that of fascist countries, where he refers to “the peaceful, peace-loving people of the United States, with all the variety and freedom of their life in such contrast to the iron discipline which has governed many other communities.” Indeed that “variety and freedom” cited by the British Prime Minister has flourished in the United States and made it a beacon of hope for many around the world. The churlish rejection of a handful of Syrian refugees is, of course, antithetical to the America that Churchill admired. Perhaps as we gather to celebrate this Thanksgiving Day, we should reflect on how to celebrate and nurture the resilience and openness that have made America a great and confident nation.

Richard LeBaron is a Nonresident Senior Fellow at the Atlantic Council. He is a former US Ambassador to Kuwait.

We would like to give thanks to Katherine Thomson of the Churchill Archives Center, Richard M. Langworth of the Hillsdale College’s Churchill Project, and David Freeman of the Churchill Centre and California State University, Fullerton, for their help with this article.